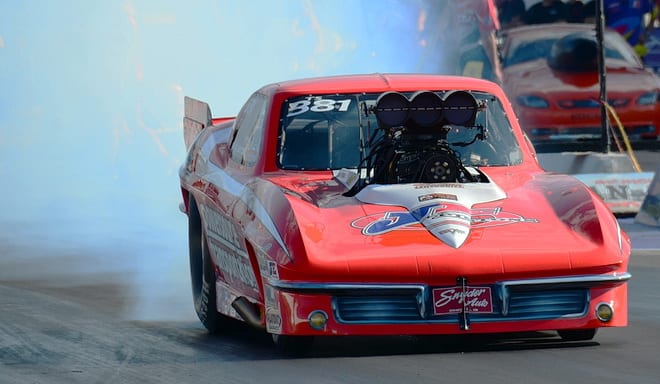 Mick Snyder and the Snyder Motorsports team are headed East to the pristine Summit Motorsports Park in Norwalk, OH for the Cavalcade of Stars NHRA Division 3 Regional this weekend. This marks the third stop of 2016 for the Supercharged, ComSyncEFI; Lencodrive Racing Transmission equipped Top Sportsman 1963 Corvette. The Powersource Transportation Team qualified at the top of the pack during the Spring Spectacular of Speed at Lucas Oil Raceway last month. The 5-time Champs are looking to keep the great performance going this weekend in front of the packed stands. The Cavalcade of Stars at Summit Motorsports Park will run from May 20th through May 22nd and will feature a Top Sportsman and Top Dragster Fast Four Shootout during the Saturday night show before the fireworks display.

“I know I say this every time we leave the shop and head to the track with our Powersource Transportation 63’ Vette, but I’m really excited for this weekend: the Norwalk Facility; the Simplicity of our ComSyncEFI System; the Almost 230 MPH Excitement of Top Sportsman Bracket Racing; the Pound of Ice Cream for a Buck; the Ability to Race with my Family; the Joy of Pushing Shift Buttons on our Lencodrive; the Accomplishment of Helping Snyder Customers; the Look on my Cam’s Face as the Bounce Houses come into View; the Thrill of Racing in Front of Packed Grand Stands; the Vintage Trailers’ Racer Appreciation Dinner; the Hope of Making the Fast Four Shootout and the Jaw Dropping Fireworks Display! There is a lot to get excited about this weekend! Not to mention, we made some major changes to the car, and I’m interested to see what the results will be.” Snyder continued, “We’ve been doing this a long time. The passion for performance and the interest of improving is what keeps us coming back for more.”

“This is my 24th season and it may seem strange, but there seems to be a thrilling story with every track anymore. Some places there are a few. The famed Norwalk Raceway Park, turned Summit Motorsport Park, has more than a few; I could write a book of stories going all the way back to our junior days. We have had 17 different dragsters, funny cars or door cars through the years, and 16 have made a pass down the Ohio quarter mile. From dominating wins to seized steering boxes, we have had our fair share of fun.” Snyder continued, ”We have won, lost, been on fire, best appearing, beat our own spare junior in the finals, qualified number 1, dropped a valve and oiled, raced in front of one of the largest crowds in drag racing history, set career best numbers, bracket raced, heads up raced and even foot raced. You just never know what you might get when you pull in the gate.”

“One of best stories was in 2010, we were racing the now defunct ADRL and it was my “rookie” year with the door car. We raced the same Powersource Transportation Corvette as now, but it was in Screw Blown, Pro Extreme trim back then. We made it to the finals. The grand stands and the starting line were packed with people. We left. The car shook hard, went right. I pedaled. Hindsight, that probably wasn’t the best idea, but it was the finals,” Snyder smiled. “The guy we raced popped the blower in a burst of flames. We went through the traps at full throttle in first gear. The boards lit up on our side for the win. Then, the discussion started. Did we cross the centerline? After what seemed like an eternity, we were good and the Minute Man was ours. The beverages were colder, the stories were sweeter and the moment was shared with a great guy that is no longer with us. This made for a win we will never forget.”

As Snyder looks for another win at Norwalk, the first of 3 rounds of qualifying for the NHRA Cavalcade of Stars begins on Friday at 5:00 PM. Qualifying continues on Saturday with two more chances to make the 32-car field at 2:30 and 7:30, as well as the Fast Four Heads Up Shootout Eliminations at 7:00 and 9:00 for the Top 4 Top Sportsman and Top Dragster Qualifiers. Final eliminations will begin on Sunday at 10:30 AM. For up to date information please log onto www.dragracecentral.com.