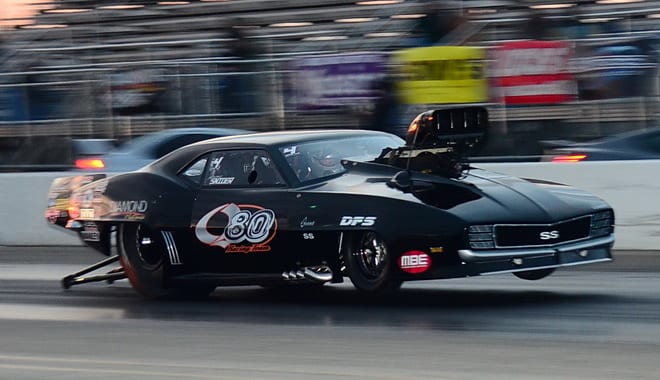 After three rounds of qualifying Friday for the PDRA Nationals at Osage Casino Tulsa Raceway Park, Brandon Snider (above) of Atmore, AL, secured the top spot in the series’ premier NAS Racing Pro Extreme class. The race is the first of nine scheduled events this year for the all-eighth-mile Professional Drag Racers Association. 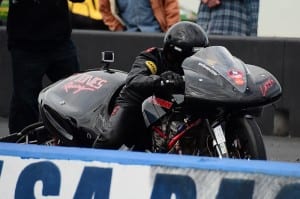 Also qualified number one in the PDRA pro classes with one more session to go on Saturday were Tommy Franklin in Switzer Dynamics Pro Nitrous, Kevin Rivenbark in GALOT Motorsports Pro Boost and Chris Garner-Jones in Drag 965 Pro Extreme Motorcycle.

In the PDRA sportsman classes, Oklahoma’s own Jerry Holt and his ’69 Camaro placed first with a 3.89 run at 190.32 mph in MagnaFuel Top Sportsman, while Kentucky’s Andrew Johnson paced the Lucas Oil Top Dragster field with a 3.79 at 189.82 mph. After only two of three scheduled rounds of qualifying were completed for the PDRA Jr. Dragster classes, Texas racer Cole Isbell ran dead on the 7.90 index to lead the way in Mega Corp. Pro Jr. Dragster and Arellyn Garner-Jones from Alabama held on to first in Talbert Top Jr. Dragster.

“I knew it was a fast one but it could’ve been even a little faster if it hadn’t hiked the wheels up so high in the first half,” Brandon Snider said after running a career-best 3.48 seconds at 219.47 mph in the second session to secure the top position in Pro Extreme. His Q80-backed ’69 Camaro slowed slightly to an early shutoff 3.51 at 195.05 in his final attempt of the day, but the elapsed time was still within the required one-percent back up to also set a new official class record.

“We ran a 3.51 straight off the trailer in testing yesterday and then a 3.52 this morning, so it was good to know we kept the momentum we’d built up at the end of last year,” Snider added, referring to a runner-up finish on another record-setting weekend last October in the final PDRA race of the season.

Defending Pro Extreme champion Jason Scruggs also stepped up in the second qualifying round with a 3.49 pass at a class-leading 220.08 mph, followed by NAS Racing teammates Mustafa Buhumaid at 3.512 seconds and Khalid Al ReFaei just seven-thousandths of a second back in fourth place, while Frankie Taylor filled out the top five with a 3.54-seconds effort. 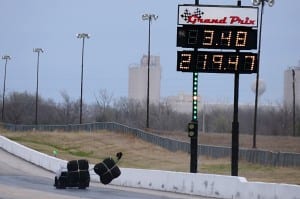 Snider said he expected his number-one run should stand up through Saturday’s fourth and final qualifying session.

“I think Jason (Scruggs) might be able to go a little quicker depending on what the weather is like, but no matter what he does we’ll still be in good shape so we’ll probably sit that fourth round (of qualifying) out. We don’t carry a lot of extra parts so we have to go into race mode now and get ready to go rounds. I just want to concentrate on the tree and go rounds and win this race tomorrow,” he said. “That’s what we’re really here for.”

Tommy Franklin (near lane) vs. Stevie Jackson
(Click to enlarge)

In the first pair out for the third round of qualifying Friday night, Tommy Franklin and Steve Jackson made the quickest and fastest side-by-side passes in Pro Nitrous history as Franklin seized the provisional pole with a record 3.68-seconds run at 203.34 and “Stevie Fast” going 3.69 at 203.83 mph.

Previously, only Pat Stoken (who sat sixth on the list in Tulsa with one more qualifying round to go) had made an official pass in the 3.60s, going 3.69 in qualifying last year at Martin, MI. However, in the next pair up Tim Savell joined the exclusive club with a 3.68 that was just one-thousandth of a second behind Franklin to secure second place heading into Saturday’s last-chance qualifying round.

“The track was tight and the weather came to us,” said Franklin, an electrical company owner from Fredericksburg, VA. “We really didn’t do anything different for that round, everything just came to us and it worked out in our favor–but just barely.”

In a much-hyped, much anticipated grudge match between Pro Nitrous stars Jay Cox and Keith Haney, co-owner of the Tulsa drag strip, Cox took the win home to North Carolina with an off-the-pace 3.88 pass after a flash of flame signaled the end of his ’69 Camaro’s powerplant just before the finish line. Haney, meanwhile, had to abort his run when his 2015 Camaro veered toward the right guardwall not long into his run. 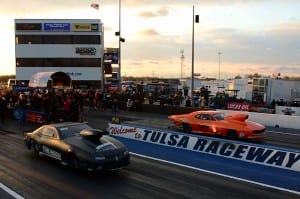 Keith Haney (near lane) vs. Jay Cox
(Click to enlarge)

Haney said all he could see was sky as his car went into a big wheelstand off the launch. “When it came down I just saw the wall coming up, but I knew from previous experience not to jerk the (steering) wheel, so I just eased it over to the left and fortunately it responded,” he explained.

Franklin cited both Cox and Haney as drivers who could step up in Saturday’s lone qualifying round to challenge for the number-one start.

“I actually think there’s several cars that could go faster tomorrow; it’ll all depend on the weather. If the temperature stays down like it’s supposed to and the wind dies down, we might be able to go a little quicker, too,” he said. “We’ve been working a lot with our engine builder, Pat Musi, over the winter and he’s found some good power for us, so who knows?”

If Franklin does hold on to the top qualifying position it would make him the first recipient of the PDRA’s new Flatout Gaskets Nitrous Wars trophy, a special award meant to be taken home by the number-one qualifier, then returned at the next PDRA national event to be handed out again to the next Pro Nitrous polesitter.

Kevin Rivenbark wrapped up Friday in Tulsa with the Pro Boost qualifying lead, but it was second-place Melanie Salemi who finished the day with a new class elapsed time record. 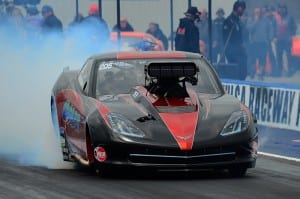 Rivenbark drove his supercharged 2015 Corvette to an unprecedented 3.75-seconds pass at 199.58 mph in the second of three completed qualifying rounds, but was unable to back it up within the required one percent in round three. On the other hand, when Salemi stepped up in her blown ’68 Firebird with a 3.78 in the final session it backed up a 3.81 from round two to give her the official record.

Third-place Ric Fleck actually posted an identical 3.786 to Salemi in round three with his ’41 Willys and also would have backed it up with his second-round time, but since Salemi ran faster (195.17 to Fleck’s 191.81 mph), it gave her the honor–for the time being.

“I think we can go quicker, and it’s not like we’re running it right on the edge, we just feel like we can put a little more power to it. I think we’ll see a lot of cars, in all classes, go faster tomorrow,” Rivenbark said. “We’re not done yet.”

Defending Pro Extreme Motorcycle Champion Eric McKinney came out swinging at the PDRA Nationals in Tulsa, going 4.05 seconds at 176.14 mph in the first of three completed rounds of qualifying Friday, edging out rival Chris Garner-Jones by just three-thousandths of a second for the first-place position.

After round two, however, Garner-Jones had taken over the lead with a 4.00 pass at 176.58, while McKinney was pushed down to third behind a 4.031 at 173.90-mph effort from Chuck Wilborn. Garner-Jones opted out of running the third qualifying round and neither Wilborn nor McKinney improved their times.

The PDRA Nationals at Tulsa Raceway Park will resume with one more qualifying session for all classes beginning at 9 a.m. on Saturday, followed by elimination rounds and special exhibition runs by a pair of jet cars and Danny O’Day’s wheelstander.