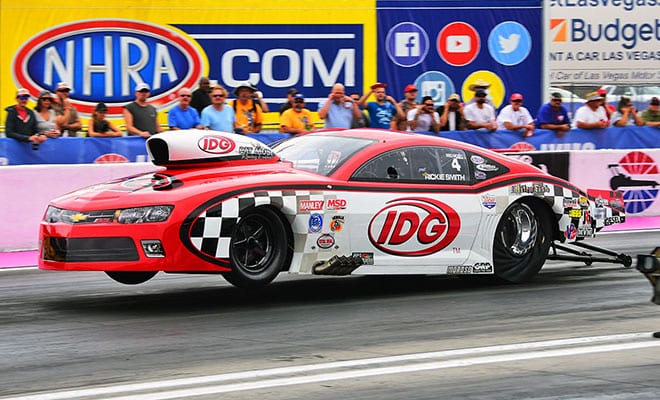 With Rickie Smith’s securement of his third NHRA J&A Service Pro Mod Series Championship during the NHRA Toyota Nationals at the Strip at Las Vegas Motor Speedway, the number of top-level doorslammer racing championships won using power from Pat Musi Racing Engines jumped up to six in just the last four years. A Musi powerplant has been on board every PDRA Pro Nitrous world champion: Jason Harris (2014), Rickie Smith (2015) and Tommy Franklin (2016). Add to that Smith’s additional NHRA championships (2013, 2014 and now 2016), and Musi power has unabashedly dominated Pro Mod competition across both series.

“Rickie’s run has been astounding. I feel like he’s done everything he could do,” stated Musi, who is currently tuning cars in the Middle East. “I feel like we’ve done everything we could do. It’s been a pretty good run the last four years. Ever since he’s been with us, he’s won championships. He’s a big part of our whole program. He helps with the chassis, and we give him the power and reliability. The combination is obviously a winning one.”

When Smith rolled into Las Vegas all the way from King, North Carolina, for the final race of the year, he already had a 93 point lead on the competition thanks to an incredible season which produced four final round appearances. He only needed to qualify to clinch his third NHRA Pro Mod championship in four years. He qualified seventh with a 5.909 ET and then went to the semi-finals of the event.

“This is awesome,” told Smith, who led the points all season. “I want to say thanks to IDG, to Joe [McCormick] and Charlie [Lingenfelter] and Lisa who helped me win these championships toward the end of my career. Thanks also to Kenny Koretsky and NitroFish and the one guy who’s stayed with me all these years, my crew member, Chad Hester.

“Pat Musi Racing Engines has been a big part of our program the last few years,” Smith continued. “We have a great working relationship. Pat’s run of championships in the last few years is an undeniable testament to the power in his camp.”

Effectively shutting out the competition in PDRA is a major accomplishment for the North Carolina-based engine builder, but also topping the competition in NHRA solidifies Musi’s performance edge. As Musi and his daughter, Lizzy, spend time in the Middle East this winter, he plans to continue pushing the envelope with the extra R&D they’ll acquire overseas, preparing for another strong season in 2017.