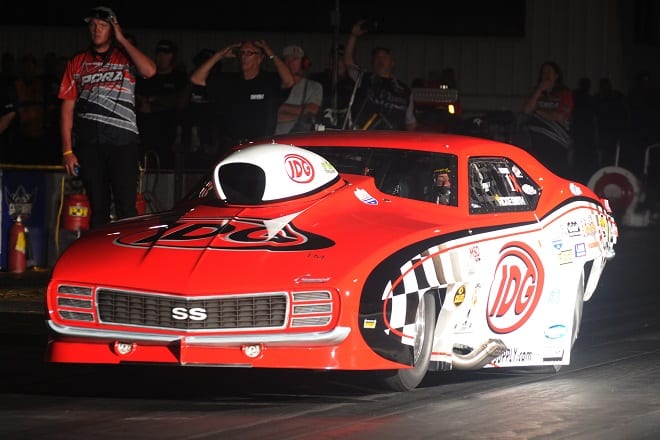 It’s been an exciting season for PDRA Pro Nitrous. We’ve seen new threats rise to the top, behind-the-scenes rivalries played out on the big stage, power wars, and an intense championship chase. Now the focus is on two men. Heading into the PDRA Brian Olson Memorial World Finals presented by Mel Bush Motorsports the championship battle is boiled down to points leader Rickie Smith and part owner of the PDRA, Tommy Franklin. 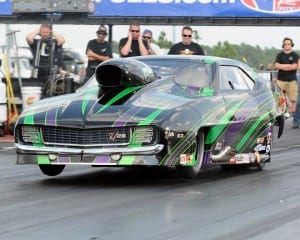 Franklin was the early season favorite, winning the first event, resetting the national elapsed time record, and gaining the early points lead. But with Smith’s win at the very next event, he quickly decided to throw his hat in the ring for the chase. The two then battled all through the year, exchanging trips to the winner’s circle and the points lead. Smith’s win at Dragstock XII gave him a decisive lead with one race to go. If Smith qualifies and wins round one, the Pro Nitrous Championship will be his. Still, Franklin retains a chance, and a fierce hope, of not being the bridesmaid for the second year in a row.

“When you race as long as I have you realize anything can happen,” told Smith. “I’ve seen it all. We just need to try to go win first round and then race from there. The thing is Tommy has a car capable of setting a record. He definitely has a car capable of winning the race. I’ve got to go up there and do my job and qualify to start with and then try to win a round. We have a good chance, but like I say, when you have a quality car like Tommy’s got and he’s a good driver, he could put the whole program together.”

If both drivers qualify and Smith goes out first round, Franklin must win the race in order to capture the championship. “We believe we can do it,” Franklin emphasized. “Our intention is to go out there and try to qualify as high as we can, try to keep lane choice and control our own destiny. The only thing I can do about it is try to go out and win the race and hope somebody can knock Rickie out.

“Regardless, it’s been a really good year,” he continued. “We’ve had great power from Pat Musi all year long. I think we’ve been number one qualifier five times this year. We’ve had a great season. We had a couple of bad races in there that got us out of the points lead, but going into the last race we have a chance. It’s a long shot, but right now our car is very competitive so we feel like we have a shot to go in and do something with it.”

In Franklin’s favor, the World Finals is his home stop on the PDRA tour. He’s won several events there in the past, including last year’s Dragstock XI rainout that was completed at Virginia Motorsports Park. He also set a record at VMP that same weekend.

At the beginning of the season a PDRA Championship run wasn’t even on the radar for Smith, who won back-to-back championships in NHRA Pro Mod the last two years. However, when things started falling into place, Smith quickly decided the PDRA was something he needed to pursue. “We weren’t going to run all the PDRA races this year,” he confessed. “We were just going to run the close ones. We didn’t go to the first one in Texas. We go to the second on in Rockingham and win it. That put us up in the top three or four in the points. So we decided to go to the next one. We ran good there. Next thing we know, about mid-season, we end up in the points battle. We decided to make a run for it. It’s ended up being a pretty good season for us.”

A pretty good season, indeed, for Smith who also still has a mathematical chance at his third consecutive NHRA Pro Mod Championship.

“He’s a great competitor,” Franklin said of big-name rival. “Rickie is a great driver. He has a very competitive car. To be able to race against him and be in this position, alone, is a feat in itself. But to be the best, you have to beat the best. It would be huge to me to win the Championship. It’s something that I’ve chased forever. More so, having finished second last year, I’m really trying to not finish second again this year. It would be a monumental accomplishment for me.

“I thank God for the opportunity that I have,” added Franklin. “I thank my family for everything they’ve done for me, supporting me and staying home and take care of my businesses for me while I’m racing, and I thank all the employees at Franklin Electric and Smartcom that make it possible.”

“Our whole deal depends on IDG,” Smith said of his primary sponsor. “They’re exploring motorsports more and more in the company. We depend on the sponsorship. Even as good as I’ve done – I’ve won nine championships and had a real good career, and a really good last two or three years – it’s still up to a sponsor whether Rickie Smith gets to race next year or not. I hope they’re happy with what we’ve done.

“Whether we win the championship or not we’ve had a good year,” added Smith. “This was my first year on an automatic car. We caught on to it pretty quick. We’ve won three PDRA races. We got one left, so we might win four. I cannot be unhappy with what we’ve done this year. That’s all you can hope for – going into the last race with a mathematical chance to win the championship after a long season. I appreciate the PDRA being out there and giving the nitrous cars another place to race. I’m thankful that this organization is there and to Jason and Tommy for sticking behind it.”