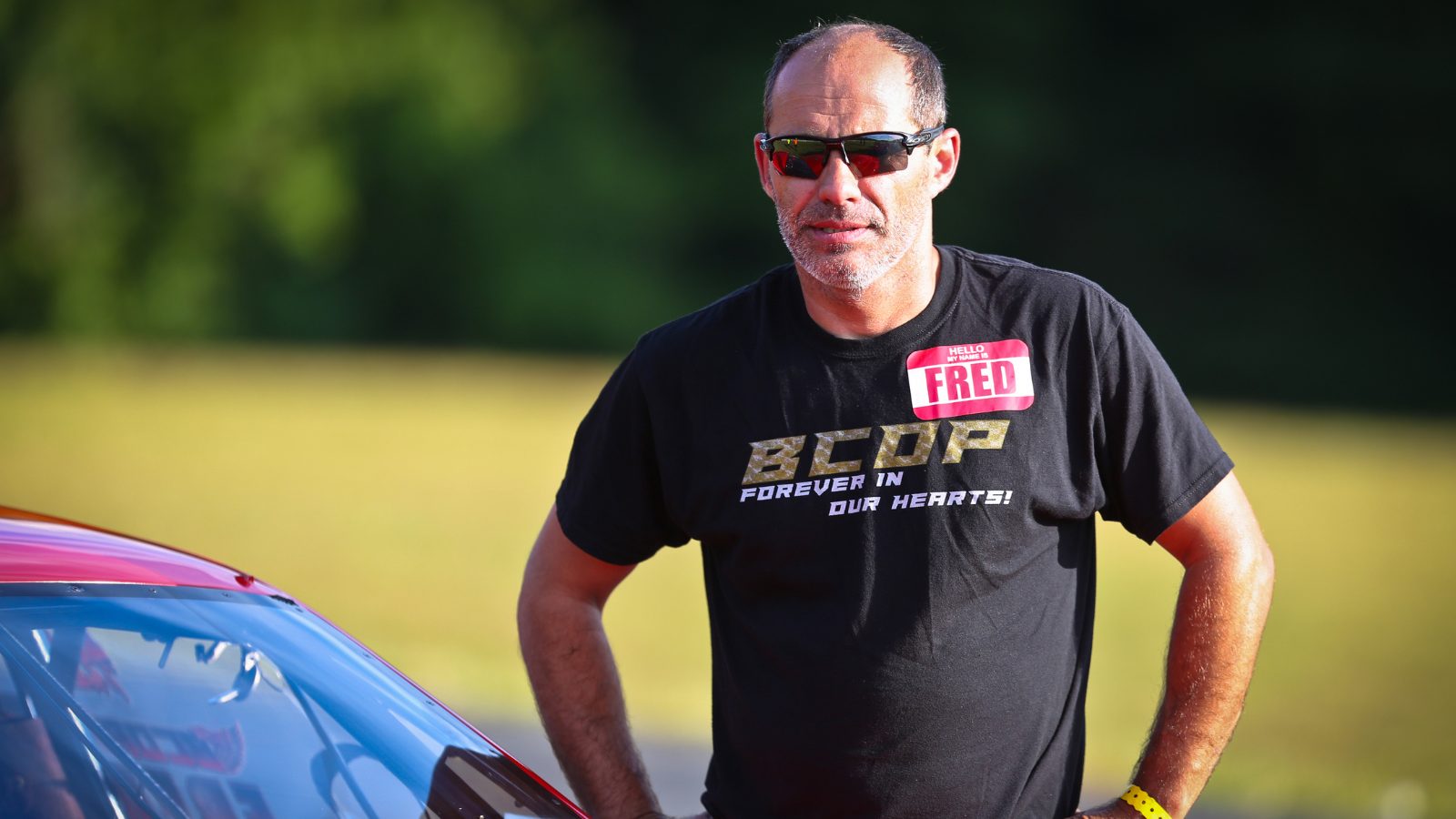 Longtime small-tire racer Manny Buginga has had a successful racing career over the years, and has been on a major win streak that began in 2021 and has continued well into 2022. Earlier this year, he purchased a Pro Mod Camaro to take the next step in his racing journey, and with little seat time to get acclimated to his new ride, Buginga will have his work cut out for him as he enters the 2023 Drag Illustrated World Series of Pro Mod, March 3-5, at Bradenton Motorsports Park.

“I was very surprised when I got asked to do it,” Buginga said. “It’s an honor to be in that crowd of people with [Todd] Tutterow and Melanie Salemi. I’m a newbie here. It’s amazing to be invited to run it.”

Amid a sea of seasoned Pro Modified racers, Buginga stands out as somewhat of a wild card for the WSOPM. He comes to the event, however, with a successful career in managing high-horsepower, small-tire cars, and brings with him a team that is more than capable of taking him to the next level. 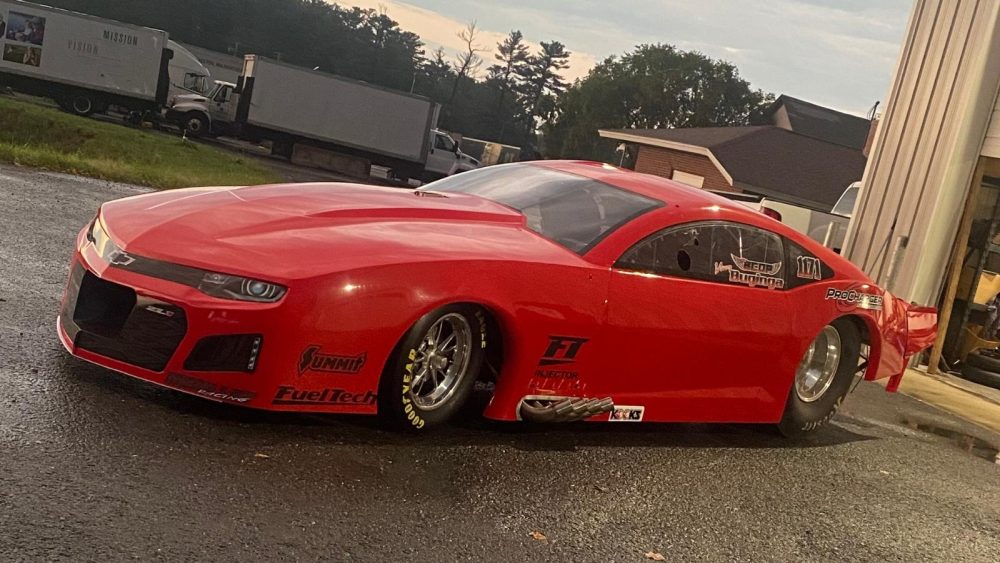 “Manny is a great fit for a multitude of reasons,” said Drag Illustrated’s Wes Buck. “He’s a personality, he’s very accomplished in the sport of drag racing, and has had success in a multitude of different arenas. Wherever he chooses to go, he has success. He’s a great guy and ambassador for the sport of drag racing, and the kind of racer we need at the World Series of Pro Mod.”

Buginga began racing competitively with the NMRA in 2001, entering the BFGoodrich Drag Radial class during the early years of radial-tire racing. He then jumped back over to 28×10.5 slicks when he joined the Super Street Outlaw category with the likes of Dan Millen, Gary Rohe, John Urist, Phil Hines, and more. He competed in that category for several years and then took a hiatus from racing, but returned in 2016 to the NMRA’s Street Outlaw category. Buginga would claim the NMRA Street Outlaw championship the following year in 2017 and continued to compete in X275 at various one-off races.

He connected with Pro Line Racing’s Jamie Miller in 2018, who joined the team, along with his son, John Miller. Pro Line Racing and FuelTech USA had just begun to branch out into the small-tire categories with regard to tuning services, and both of those companies and Miller himself bring years of event wins and championships in drag racing.

Thinking about the next step in his racing career, Buginga brought home a new-edge Mustang he dubbed “Fred,” with which he would enter the Pro 275 and no-prep ranks.

Fred was a departure for the self-proclaimed “turbo racer at heart,” as the car’s powertrain moved away from the Harts-turbocharged, DiSomma Racing Engines small-block Ford combination in his X275 Mustang named Big Red and towards a 565ci Pro Line Racing Hemi with a ProCharger in Fred.

Not only did Buginga need to familiarize himself with a new car and additional horsepower, but he had to learn to drive two different combinations, with big slicks for the no-prep races and radials for Pro 275. Still, the seasoned veteran set the world record for a radial-tire car in the quarter-mile with a 5.75 at 228 mph at the World Cup race in 2021 (which still stands today), and followed that up by resetting the Pro 275 record in Orlando with a 3.668.

“Last year, we went to nine straight finals and only lost one,” Buginga said of his team’s successes.

“We went over there to race, and every corner we turned, nobody wanted to race us,” Buginga said. Eventually, the racing contingent stepped up, but their fears were well-founded as Buginga would go on to claim three wins in the Futures class and one in the Big-Tire class.

“During his brief tenure in No Prep Kings, he was a significant needle mover and definitely brought a lot of northeast support to the series,” Buck went on to say. “Including racers like that is another step towards creating a true World Series of Pro Mod where we bring in racers from all walks of life.”

Moving from the No Prep Kings series back to radial-tire racing, Team Buginga entered both the X275 and Pro 275 cars at the No Mercy 13 race, with Buginga driving both entries. At the conclusion of the event, they claimed both class wins. Just a month later, Buginga followed that performance up with a trip to the World Cup Finals race in Maryland and a semifinal appearance with “Fred” in Outlaw vs. Extreme and a win in X275 vs Hot Rod with “Big Red.”

In the middle of 2022, among his many success on track, Buginga was busy making new plans for his next adventure.

“It’s always been a dream of mine to have a nitro Funny Car and to race in the NHRA,” Buginga said. “A deal came up to buy an NHRA team, but Jamie and Franny pushed us in the Pro Mod direction. There was a Pro Line car that was supposed to go to Russia, but didn’t because of what’s going on there.” 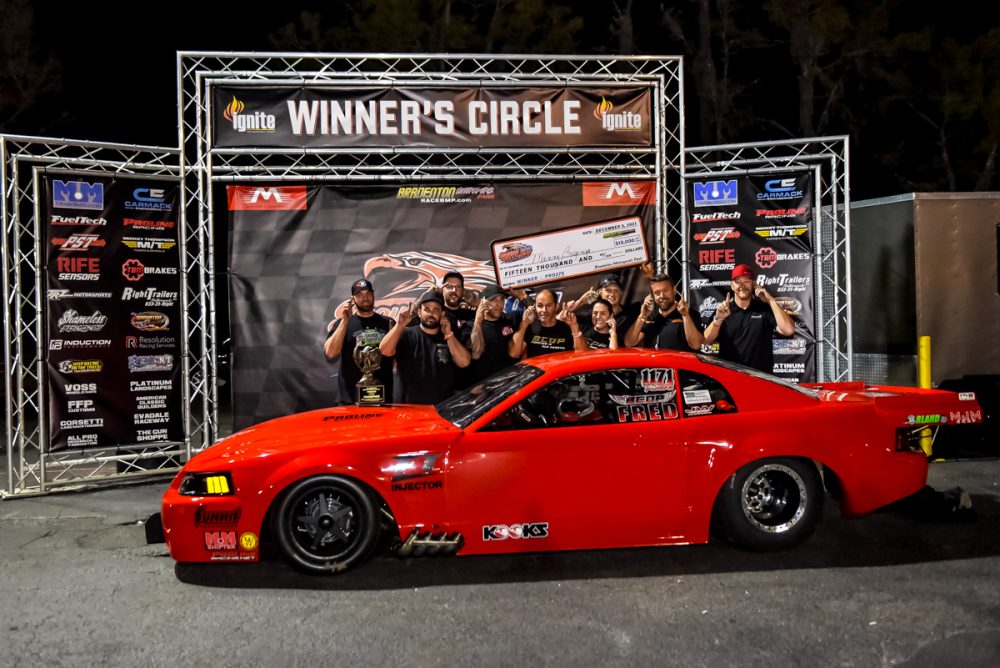 The new car is yet another departure for Buginga, a longtime Mustang racer, as it is not only his first Pro Mod, but also a Camaro, at least as far as the body is concerned. Underneath the 2019 Chevy Camaro shell is a Jerry Bickel Race Cars chassis, a Pro Line Hemi with a ProCharger, and an M&M Transmission. Just as with his other cars, this one is equipped with FuelTech EFI as well. The whole car was gone through and freshened up, and the team was able to take it to the Yellowbullet Nationals for a shakedown test. There, Buginga clocked a 3.73 before various bugs in the car kept them from further testing.

“We were in the middle of the championship with Pro 275 and a few rounds out of X275, so we just had to put it on the back burner. We are going to run Orlando and then move all of the 275 stuff out of the truck and head to Bradenton to start testing for a week or so prior to the Snowbirds.”

As of this writing, Buginga will roll into the World Street Finals in Orlando holding second place in both X275 and Pro 275. Then, he’ll have a quick turnaround to debut his Pro Mod at the Snowbird Nationals in Bradenton just prior to the Drag Illustrated World Series of Pro Mod.

“I feel our history speaks for itself,” Buginga said. “I feel really good about the team. It’s all about power management, which I think we’re really good at.”

“This is an honorable deal for me,” Buginga said of his invitation. “We get to compete against the Stevie Jacksons and Melanie Salemis of the world.”