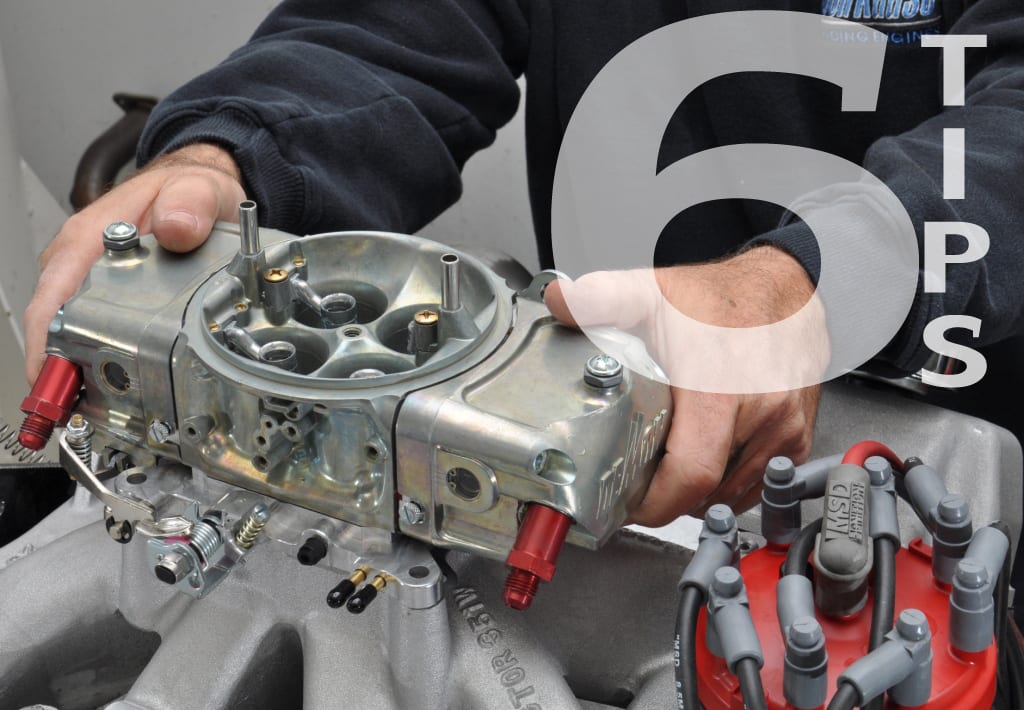 1.) How do I select the right size of carburetor?

Carburetor performance is largely based on the air-speed traveling though its venturis. If they are too big the air speed will be reduced, too small and vice-versa. Probably the best instruction on carburetor choice is found in the Demon Carburetor Selection guide. It is based on camshaft duration at 0.050in of valve lift, the type of intake manifold (dual plane or single plane) and the type of transmission (manual or automatic) and stall speed. Beyond this it is always best to discuss carburetor selection with a qualified technician.

2.) What is one of the most commonly overlooked carburetor-tuning issues?

One of the greatest obstacles faced by amateur carburetor tuners is failing to understand the essentials of initial ignition timing. Ignition timing is affected by a host of elements including fuel type, mixture strength, combustion chamber shape, compression ratio, temperature and humidity. Bigger camshafts and larger cylinder heads with matched intake manifolds require increased ignition timing to promote better air velocity and maintain efficiency. Thus the carburetor is helpless in its plight if the initial timing is late or the timing advance curve is slow. These two potential timing impediments frequently exhibit poorer starting and drivability troubles. The ignition is always timed to fire the spark plug before the piston reaches Top Dead Center (TDC) in the cylinder. Firing before TDC is necessary because of the time it takes for the flame front to ignite the air-fuel mixture in the cylinder. Demon’s carburetor selection guide consists of helpful recommendations on ignition timing settings with consideration to things such as camshaft duration, valve lift, and other contributing factors to assist in the timing process.

When carburetor or driveability complications occur under 3,000rpm, improper timing is often responsible for issues such as rich idle, hesitation or dying when shifting gears and stopping.

3.) What carburetor tuning myths do tuners frequently fall victim to?

4.) Clogged jets or incorrect idle mixture settings are often accused of causing hesitation or flooding under driving conditions, or starting and idling issues. But are there other malfunctions that could contribute to these conditions?

Float adjustments are often disregarded during carburetor tuning, even though hesitation or an excess of black smoke from the exhaust could be the result of an improperly adjusted float level. After the idle mixture and ignition timing have been

properly set, it is time to check the float levels. With the motor running the fuel level should be in the middle of the glass window of the fuel bowl. If it isn’t loosen the lock screw on top of the bowl and adjust the nut clockwise to lower the float level and counter-clockwise to raise the float level. Make the adjustment by one flat of the nut at a time and wait for the carburetor to respond. The ‘dry setting’ is accomplished by removing the fuel bowl, and with it turned upside down, set the dimension between the inside top of the bowl and the top of the float at approximately 0.375in to 0.0400in.

5.) What are the rules for mounting a fuel pressure regulator?

mounted from the carburetor, the slower its reaction time.

6.) After carburetor tuning what final steps should be made before hitting the road?

Always start the engine and check for leaks before closing the hood. Better to repair a leaking fuel line fitting or a malfunctioning float level than to witness later the paint being burned off an immaculate hood!