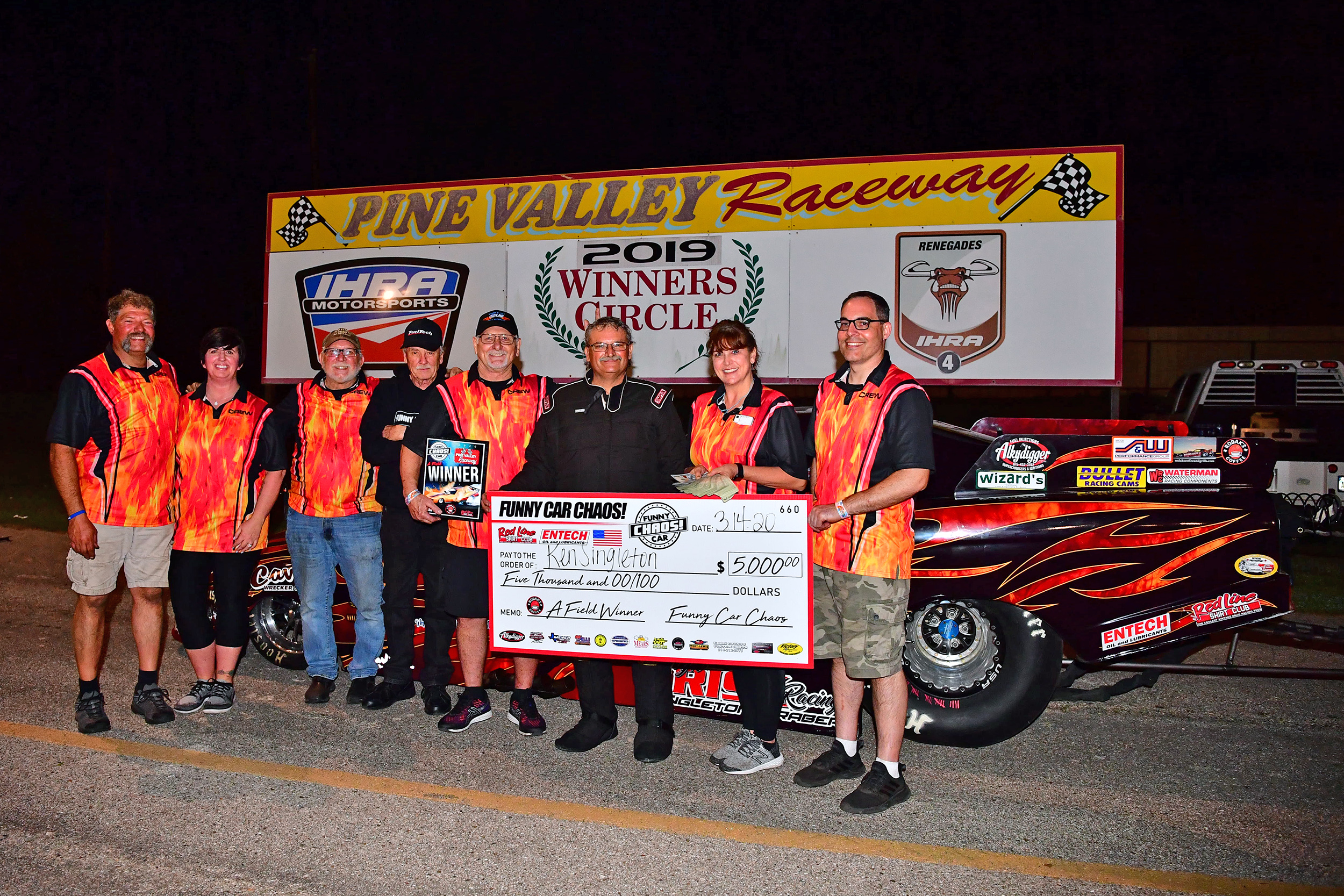 The highly anticipated season opener of the 2020 Red Line Shirt Club Funny Car Chaos Championship Series presented by Entech Oil was held March 13 and 14 at Pine Valley Raceway in Lufkin, Texas. Tucked deep into far East Texas, this event marked the first major event of the new decade at Pine Valley and despite an unfavorable forecast and growing paranoia of the Coronavirus, over 2,000 spectators and racers made it through the gates for two days of Funny Car-filled fun and entertainment. Thankfully, not a single drop of rain landed on the property and the Funny Car Chaos racers put on one heck of a show for the fans in Lufkin! 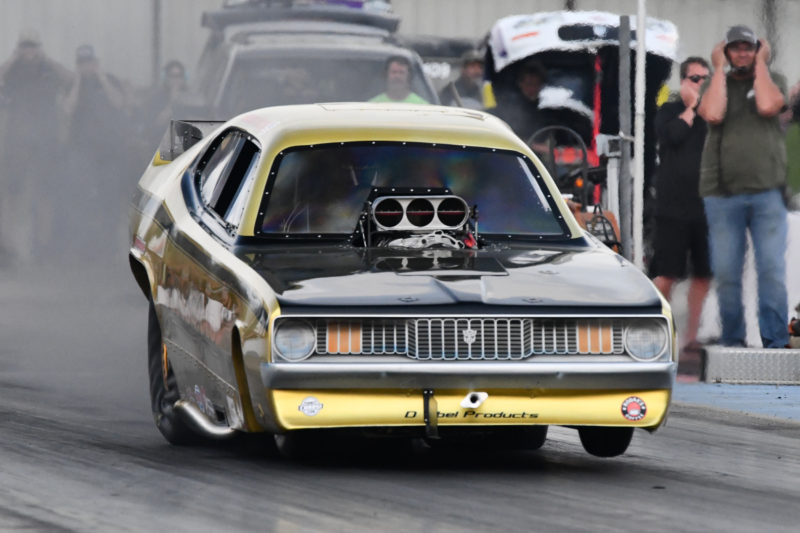 Friday night held two rounds of heads-up qualifying with 17 Funny Cars on the property plus Ray Kelley’s jet dragster, the always entertaining Dirty South Gassers and more. After two of three qualifying sessions were completed, Ronny Young in the famed “Blue Max” sat atop the list with a 3.88 at 197 mph pass. Defending series Champion Ken Singleton (pictured above) and team “High Risk” dipped into the 3’s with a 3.99 at 171 good for the number two spot. Chris King posted a nice 4.04 off the trailer in Michael Harrigan’s “Fool’s Gold” fuel burner who made the tow all the way from West Palm Beach, Florida. King and Harrigan plan to run the full tour in 2020. Chuck Loftin’s 4.10 rounded out the top four qualifiers in the Rodak’s Custom Coffee ‘A’ Field while Jeff Cameron’s “Magnolia Missile” led the AlkyDigger ‘B’ Field qualifiers with a 4.61 at 149 mph.

A Saturday morning fog cleared and brought sunshine and wonderful weather conditions and funny cars rolled out of their trailers and teams began preparation for the final qualifying session. Fans found their seats in the stands and tailgaters sold out ‘redneck row’ as they call it, everyone eager for some Saturday side by side funny car action as the final session got underway. Sixteen cars survived Friday night as unfortunately the Doak & Poloson “Bucket List” team broke a rear end and were now out of competition.

In the final qualifier, Ken Singleton booted Ronny Young off the top of the list with a strong 3.85 at 197 mph to take the pole position in the ‘A’ Field. Jeff Cameron improved his time to a 4.52 at 151 mph, bumping into the ‘A’ field which settled Dustin Bradford’s “American Dream” into the pole position in the ‘B’ field with a 4.53 at 138 mph. Paula Martin rounded out the ‘B’ field in Walt Fuller’s nitro machine as the pairings were set for first round eliminations, scheduled for a six o’clock start. 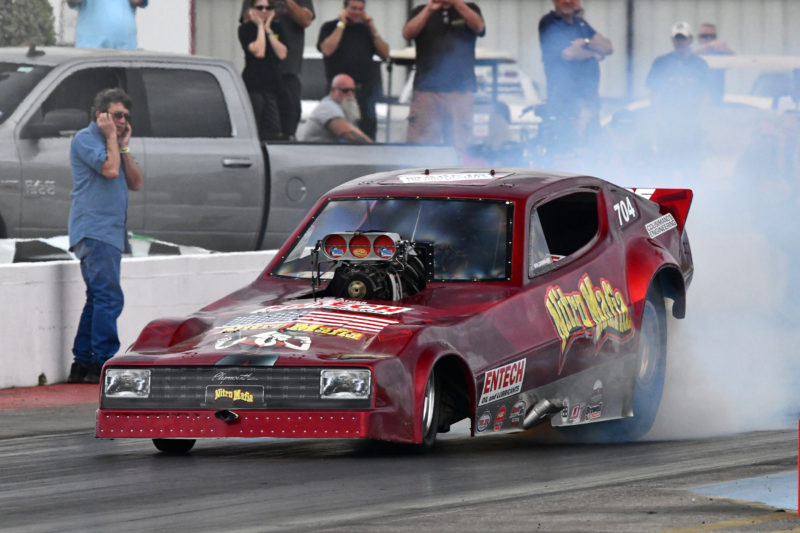 It was time to play for keeps as the Rodak’s Custom Coffee ‘A’ Field got underway with two fuel burners kicking things off. Kebin Kinsley’s “Wild Child” came to life joined by Chuck Loftin’s “Motivation” as the sound of cackling pipes filled the valley in Lufkin. As the drivers crept into the beams, hair stood on the arms of everyone on the property as the first pair was just seconds away from blasting off the line. They left together and charged hard out of the gate, Kinsley’s front wheels clearly dangling as the car was making a stead move to the centerline. Finally, Kinsley was forced to lift and watch Loftin rip off his best pass of the weekend with a 3.87 at 192 mph to take the win.

Chris Schneider staged John Troxel’s “Brutus” alongside Ronny Young in the “Blue Max” in a match up that took many on a trip down memory lane. Young took a slight advantage off the line, but went into severe tire shake forcing him to abort the run, while Schneider charged right down the track to a 4.52 at 157 mph win. Ken Singleton repeated his qualifying time, to the thousandths, with a 3.852 to dance around Jeff Cameron and in the closest pair of the round, Steve Burck’s big show legal top alcohol entry posted a 4.32 at 172 mph to holeshot Chris King’s 4.15 at 156 mph. 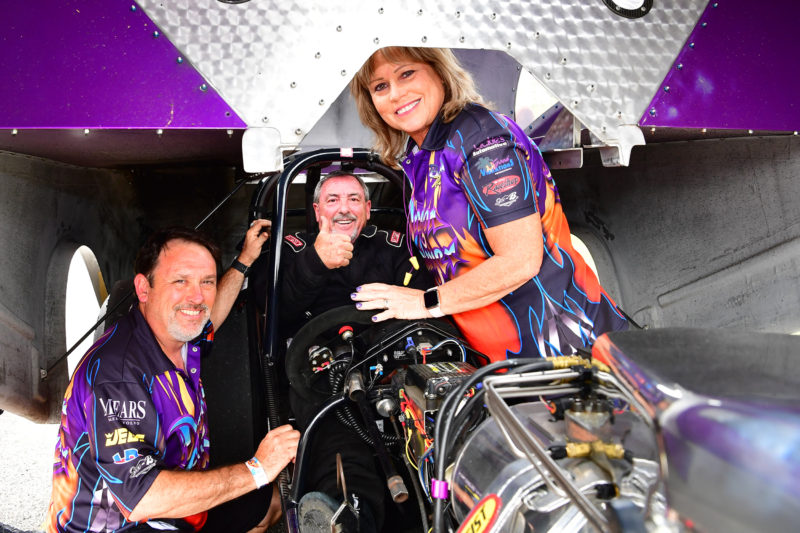 Paula Martin and Dustin Bradford squared off in the first pair of the AlkyDigger ‘B’ Field but top qualifier Bradford had issues starting and Martin was given the solo signal from race director Bubba Corzine as she advanced with an 8.86 at 52 mph. Andy Mears’ “Dragon Slayer” and Damon Kuhn’s “Passin’ Gas” alcohol burners were up next. Mears ripped off the line, but the engine went silent at halftrack. Luckily for Mears, Kuhn, who is still in shakedown mode with a brand new car, was far behind as Mears coasted to the win with a 7.05 at 58 mph. Unfortunately, Mears’ damage was enough to sideline his team for the remainder of the event.

Tod Barker ‘s “Back in Black” and Scott Cousimano’s Entech Oil-sponsored “Nitro Mafia” kept fans on their feet as Cousimano’s parachute shook out, the car broke loose, and pedal jobs ensued but to no avail as Barker’s clean 4.57 at 155 mph took the win. Finally, two Oklahoma based alcohol burners closed the round as Steve Vang made his series debut in the “Wicked Weekend Warrior” entry alongside Jordan Ballew’s new look “Ballew Thunder” Nova. Ballew had mighty struggles in pre-season testing, but was not going to miss his first ever Funny Car Chaos as the only racer on the planet to have attended now all 13 FCC events. Despite struggling to find the tune up, Ballew and team put their best effort forward but a 5.55 was no match for Vang’s 4.66 at 148 mph as Vang was going rounds in his series debut. 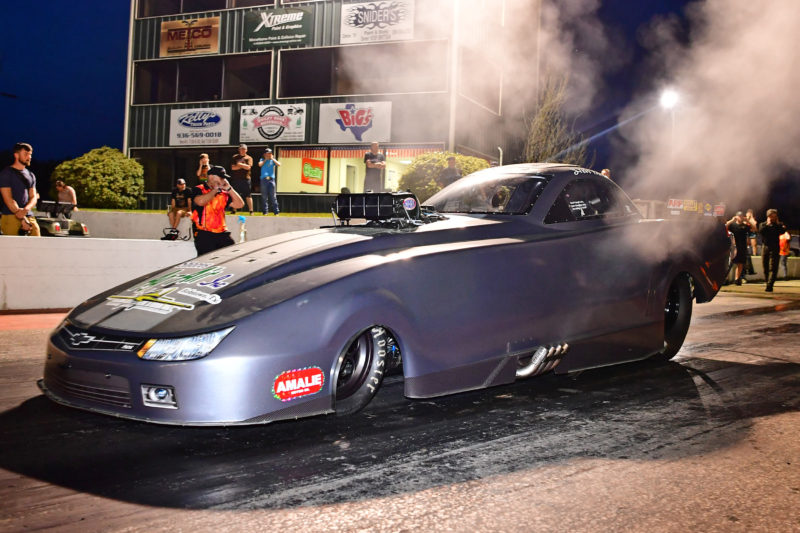 The semi-finals brought some great match-ups to the lanes with Schneider and Burck kicking off the ‘A’ field as Schneider used a .007 reaction time and a 4.48 at 159 mph to edge out a pedaling, but quicker Burck who’s 4.40 at 139 came up just short at the stripe. Schneider was final round bound in the “Brutus” and would face the winner of the next powerhouse pairing between Singleton and Loftin. Loftin’s .022 reaction time gave him the edge early, but the “Motivation” Mustang went wheels up and drifted across the centerline while Singleton lowered the boom with a stellar 3.83 at 196 mph win.

Barker and Martin came to life as the ‘B’ field got underway. After their burnouts, Martin was forced to shut off due to a leak, giving Barker the solo win as he clicked off a 4.89 to move into the final round. Steve Vang took advantage of a competition bye run as Andy Mears was unable to make the call. Vang’s 5.07 solo hit put him into the finals in his series debut as the all Oklahoma final round was set in the AlkyDigger ‘B’ field. 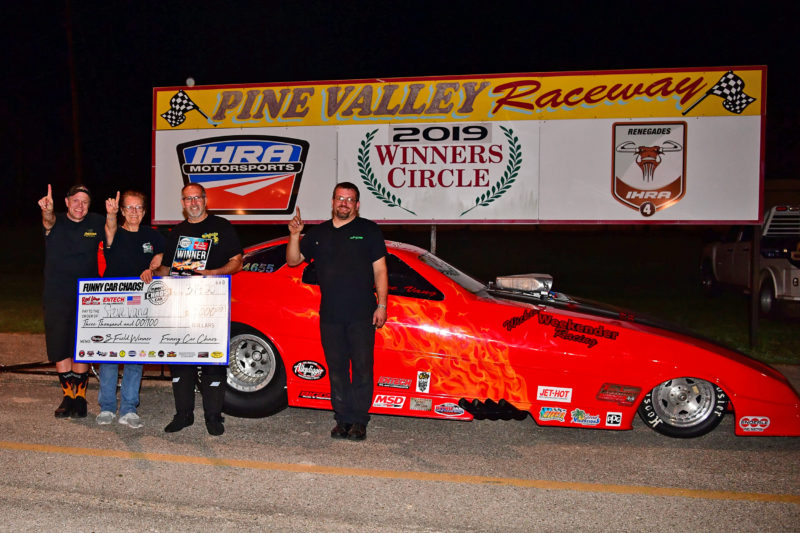 It was time for the last dance in Lufkin, which actually got underway thirty minutes early as all the teams quickly serviced their cars and made a prompt arrival to the lanes ready to crown our first Funny Car Chaos winners of the new decade! Four alcohol burners were ready for battle in Lufkin as Barker and Vang pulled into the waterbox. A friendly Red River rivalry had quickly formed between these two teams and bragging rights meant more than the pay day in this one. Barker could taste the win light, which may have influenced his anticipation, as his -.160 red light ended his chances on the starting line despite his quickest pass of the event with a 4.52 at 158 mph. Vang’s win light was on and his 4.90 at 136 locked in his first Funny Car Chaos victory in an impressive debut with the series. Congratulations to Steve Vang and the entire “Wicked Weekend Warrior” team on their big win in the Alkydigger ‘B’ Field at our season opener.

The last pair, the big kahuna, the Rodak’s Custom Coffee ‘A’ Field final round was ready to fire. Could “Brutus” muscle past the defending Champion and top qualifier? The burnouts were complete and the crew chiefs guided their drivers into the beams. Schneider blasted off the line yet again with a big holeshot, but the screw blown ponies of Singleton quickly closed the gap and at the stripe it was all “High Risk” with a 3.87 at top speed of the meet, 200.53 mph, as the team erupted in celebration on the starting line. Hats off to both teams as they proved consistency wins drag races. Congratulations to the “High Risk” team on their Rodak’s Custom Coffee ‘A’ Field win to start their title defense and to team “Brutus” on a strong showing in Lufkin.

Whew! We did it! The season opener is in the books despite threatening weather and a global paranoia we all know much more about, now just a few days later. For those in attendance, Funny Car Chaos at Pine Valley Raceway was a welcome relief and opportunity to do what we love with the people we love. Let’s all be thankful for that opportunity and Funny Car Chaos would like to thank the Gary Peltier, William Valentine and the entire Pine Valley staff for a job well done in addition to thanking all our supportive racers and fans who made this weekend such a fun time for all involved. 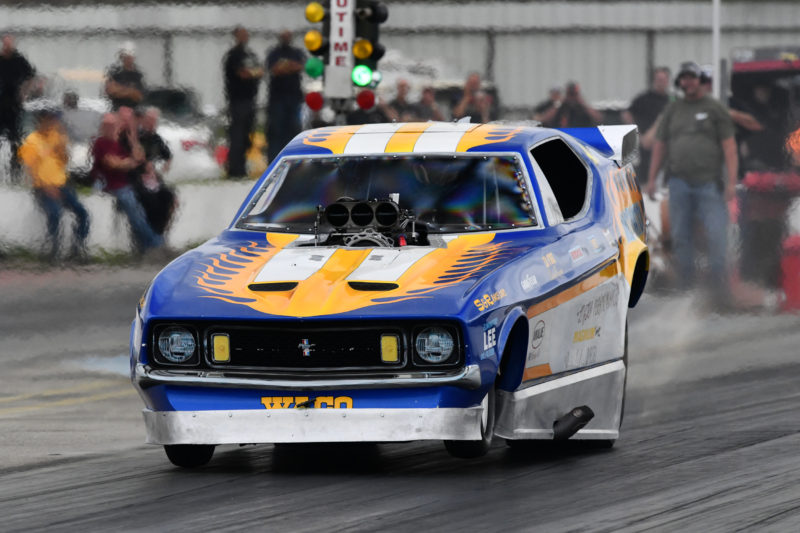 Bonus program winners from Lufkin include Chuck Loftin who took home the “Entertainer of the Race” award in memory of Raymond Beadle courtesy of Blue Max Racing, Jordan Ballew took home “Quick Reaction Time of Round 1” courtesy of Mears Mazda Volvo, Tod Barker clinched the “Top Speed of ‘B’ Field Eliminations” bonus courtesy of Littlefield Blowers and Justin Craig won the “BUG” bonus, which at this event stood for “Back Up Guy” in his crowd favorite ‘Brutus’ outfit, courtesy of Still Crazy Racing and Concrete & Asphalt Paving Services.

Please note a schedule change in required response per the request of Ellis County, the event previously scheduled for April 3-4 at Xtreme Raceway Park in Ferris, Texas has been re-scheduled for May 1-2 as we highly anticipate our series debut at DFW’s premier eighth-mile facility. Thus, our next event will be held April 24-25 at historic Mo-Kan Dragway in Asbury, Missouri at the third annual Decades of Wheels Funny Car Chaos.