Shawn Langdon is used to racing a lot, just not like this.

With the country on lockdown, the NHRA Top Fuel standout has taken to iRacing for the first time. There’s been pluses and minuses with it, with the plus being it’s opened up the former Top Fuel world champ to new forms of racing.

He’s showcased his driving talents in the Elite Racing League, putting together impressive showings racing against top names in IndyCar. It’s kept Langdon busy during the COVID-19 pandemic, but it certainly not what how he had expected his 2020 to go.

“I was running with the actual IndyCar guys, and I’m like, ‘I have no business being in this race.’ It was pretty neat and I’ve been having a lot of fun,” Langdon said.

Of course, the minus is Langdon isn’t racing in a drag racing format virtually, something he talked about with Drag Illustrated in part one of a two-part interview. Langdon discussed his iRacing start, the lack of a drag racing presence in iRacing and how team owner Connie Kalitta and Kalitta Motorsports have pushed forward during this time of uncertainty.

DRAG ILLUSTRATED: What was your experience with iRacing before all of this hit?

SHAWN LANGDON: I had never done any of it. I had heard about it from some of the different drivers like (Ron) Capps and couple of the other drivers, and you know, we kind of kicked around the idea and talked about it, but for me, I didn’t really have a whole lot of time. Most of my time is usually spent on the NHRA circuit and usually I’m working on my sportsman cars and doing sportsman racing on my off weekends, so I don’t really have a whole lot of time to do it. It kind of looked like something that would be fun to do, you know, a here and there type of thing.

I was sent (a simulator) just before we went to (preseason) testing, and so I hopped on it a couple times and thought, ‘You know, this is pretty cool.’ Through all the stuff that’s been going on, I’ve really utilized it in the last a few weeks, just as, as kind of staying relevant, staying out there, keeping racing. I mean, as much as some people view it as a video game and I mean, I guess it could be taken that way, there’s so many things that are realistic. There’s a lot of things I’ve learned driving-wise from this game.

DRAG ILLUSTRATED: It’s certainly a big adjustment going to a totally different style of racing. What was that process like for you?

LANGDON: I just had no idea the world of open wheel racing, or stock car racing, or sprint car racing. Obviously I’ve kind of always been a one track mind with drag racing growing up. I pay attention to the other sports, but never really got into it. Then when I started getting into this game, the first couple of races, I’m speeding on pit road blowing through my pit stall, like causing accidents, they’re kicking me out of the game.

I practiced probably five, six, seven hours, just understanding how to pit under green, understanding fuel mileage and being able to calculate my fuel mileage, and that’s just the testing. Then, I started doing some practices with the other drivers, understanding how to drive in traffic, and what was pretty neat was being able to do that and understand it and see the progression. I really started picking Graham (Rahal’s) brain about driving an IndyCar, and for the most part he says it’s pretty darn close (to realistic). Like that’s about as close as you’re going to get without actually doing the real thing. 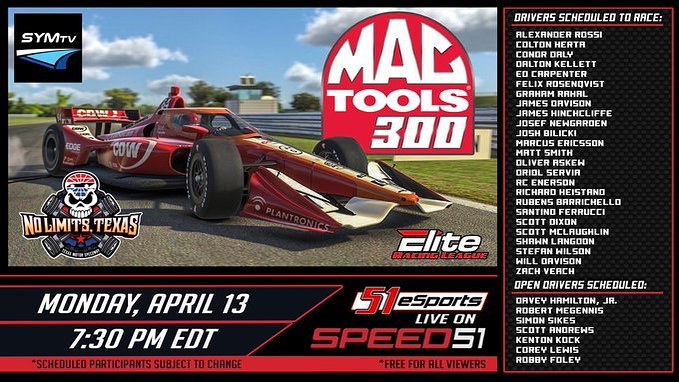 DRAG ILLUSTRATED: It seems like you’ve shown that driving talent is applicable to all motorsports. Winning races, having some success — and at the very least just staying active — how exciting has that been?

LANGDON: It’s been pretty cool. We just did a race at Texas and I was able to work with Mac Tools and brought them on board and they sponsored the race. So you get them a little added exposure, which was really neat, and I felt really good. I was first in practice, I qualified fourth, and, then I was running top five majority of the race I’ve won a couple races and there’s some pretty good drivers in there.

I’ve learned a lot from it. I tell you, the adrenaline that you get from it is real life and, and just the commitment that you have mentally in it is pretty substantial. I mean, you can feel your adrenaline going, your heart’s pumping, your hands are getting sweaty. I understand why a lot of those guys wear gloves.

DRAG ILLUSTRATED: It seems like we could have been having these same conversations with a drag racing game or simulator. Is it discouraging that there isn’t a drag racing game, especially seeing the interest these iRacing games have with fans?

LANGDON: Oh, absolutely. I mean NHRA as a whole missed the boat on this. I’ve been one that’s expressed for the last few years that, ‘Hey, look, we need a video game.’ I’ve been fairly vocal about it. But I really felt like some sort of simulator like this would be huge for NHRA and NHRA fans because there’s a lot of things that go on inside the car and I don’t think a lot of people have experienced that.

It’s a whole different engagement deal drivers can have with fans, not only with the fans being able to pop on and race against professional drivers — which for me, running against the IndyCar guys like Graham, Will Power, James Hinchcliffe, Alexander Rossi, Juan Pablo Montoya, Helio Castroneves, like that’s pretty cool. It’s an interactive thing and something that’s really cool where the fans get an opportunity to run against these guys. And that’s something that they couldn’t otherwise have. This is the only opportunity for that.

Hopefully (NHRA and drag racing) can take this and learn from it and, and see that there is a lot of value in it. Like I said, it was cool for Mac Tools to be involved in that race last weekend and they were thrilled to be a part of it. Right now, this is really the only opportunity that you have to interact with your fans, to interact with your sponsors.

DRAG ILLUSTRATED: It seems like you and everyone at Kalitta has been pretty creative in trying to activate some sort of sponsorship during this time. How much of that has been stressed as a team, just keep those sponsors in the spotlight as much as possible in a time like this?

LANGDON: I have to give a lot of credit to the collective group, especially Chad Head. We’re constantly having conference calls and there’s a lot of stuff getting discussed, a lot of ideas getting thrown around. One thing that Elon Werner and Luke Fath have both done is they’ve done a really good job of keeping our names out there. That was one thing that was stressed to us in the beginning, like, ‘Hey, look, we’re not going to be the team that’s just going to go sit on our butts for the next three months and wait this out.’

We’re in a very good position, and Connie has kept the teams intact, all three teams, and we’re one of the few teams that have done that. Obviously we’re very grateful to Connie for that, but in the meantime, we’ve got to keep the sponsors happy and keep them going. So that’s just been a very big thing. It’s constant discussions of, ‘Hey, do you guys have any ideas? Hey, what do you think about this?’ You’ve got to keep going, keep progressing, keep pushing and you’ve got to keep your name out there.

In Part II, Langdon discusses more about what an interactive drag racing simulation could provide to fans, how soon he expects to be racing and what the rest of the year has in store for him and the rest of the NHRA. 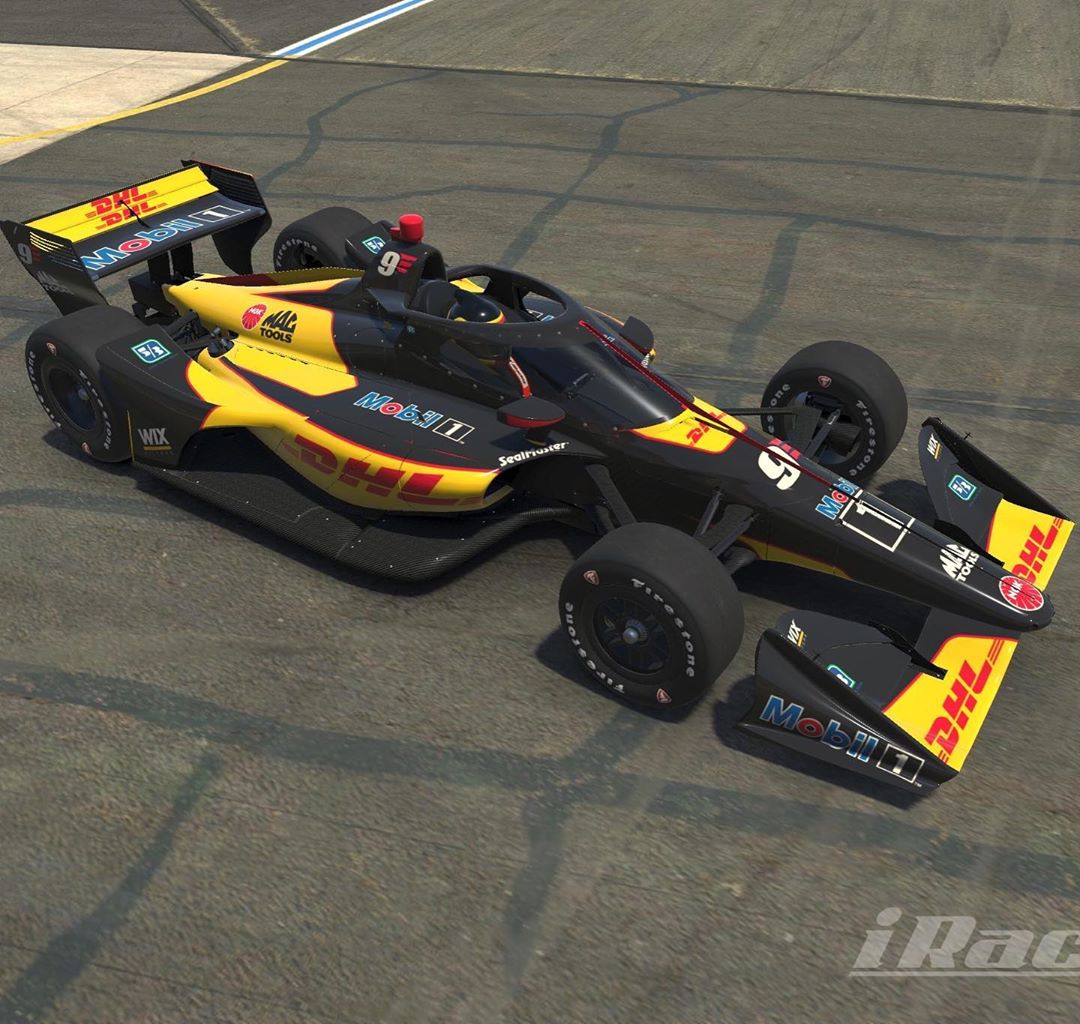