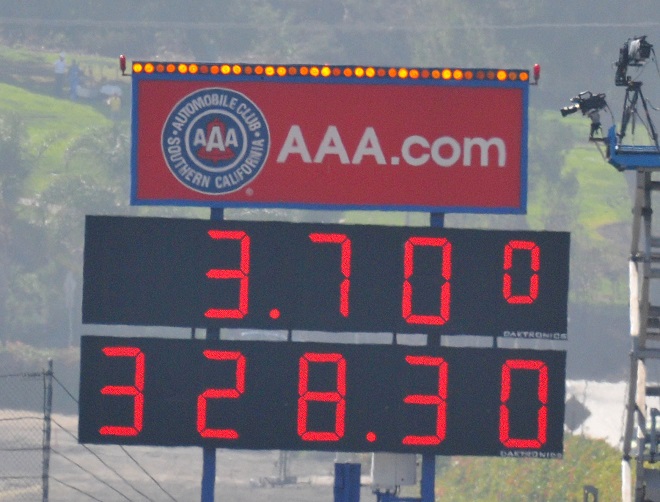 Shawn Langdon made the quickest pass in NHRA history in the Knuckle Sandwich/AJPE Top Fuel dragster during today’s third qualifying session for the first race of the 2015 NHRA Mello Yello Drag Racing Series season. Langdon, whose Alan Johnson Racing team is searching for a sponsor after unexpectedly losing its funding in the final days of 2014, is the No. 1 Top Fuel qualifier for tomorrow’s 55th annual Circle K NHRA Winternationals, and the team won this event in 2014.

Langdon blistered the Auto Club Raceway track with a brilliant 3.700-second pass at 328.30 mph and blasted to the top of the event qualifying order. The previous quickest pass was Antron Brown’s 3.701-second effort recorded in October of 2012 in Reading, Pa. The teams were set to make the fourth and final qualifying attempt late Saturday afternoon when light rain showers moved into the Pomona area forcing NHRA officials to cancel the final qualifying session. 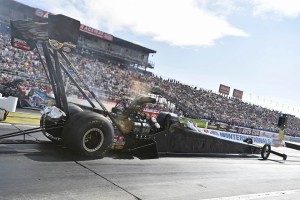 “It was just a picture-perfect run,” Langdon said. “It accelerated hard and pulled all the way until I shut it off. I thought I caught a glimpse of a 3.70 on the scoreboard, but I wasn’t really sure. When I turned the corner and saw everyone hootin’ and hollerin’, I thought ‘I guess I did see that 3.70.’ It was an excellent job for the guys – very rewarding for them. We knew the potential was out there; it was a matter of getting the right conditions and setting the car up for them. (team owner) Alan Johnson, (crew chiefs) Brian Husen and Jason McCulloch have been putting their heads together, and we felt there was an opportunity for it. It was just a matter of everything falling together.

“It couldn’t have happened at a better time for everyone at Alan Johnson Racing. Coming to the first race of the year, it’s crucial for us to make a statement early and try to start off with a win – that’s our focus, and we couldn’t have scripted it any better at this point.”