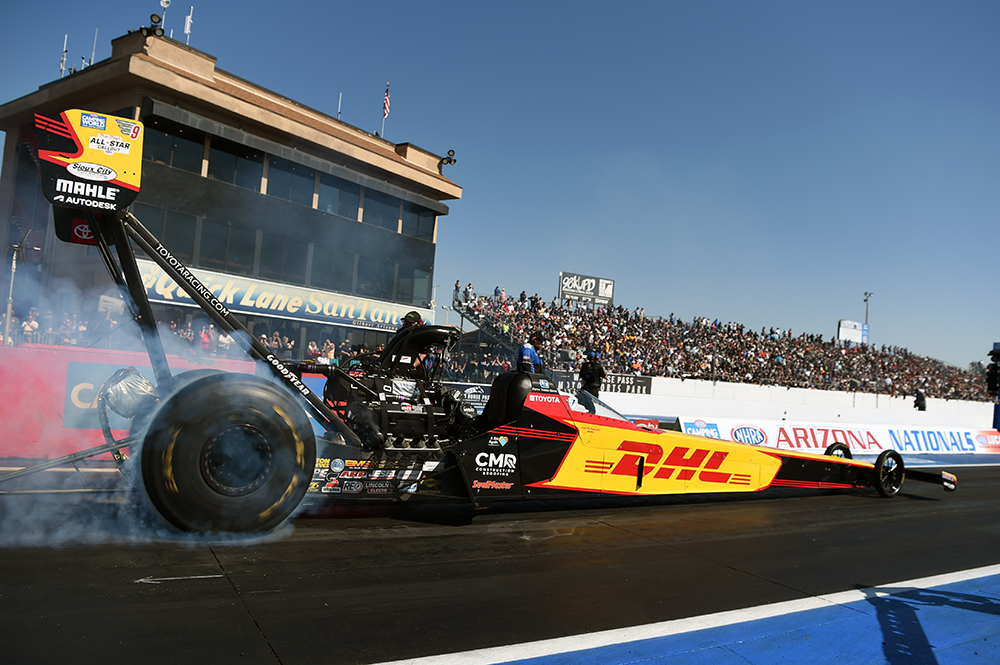 Shawn Langdon and the DHL Kalitta Air Toyota Top Fuel dragster raced to the quarterfinals today at the NHRA Arizona Nationals. The 2013 NHRA Top Fuel champion stepped up every round of qualifying and moved into race day as the No. 7 qualifier. His best time of the weekend going into eliminations was a solid 3.696 second pass.

In the first round Langdon was able to secure lane choice over his opponent. When the Christmas Tree fired Langdon got the jump off the line against Antron Brown and he never trailed in the race. His .045 reaction time put the DHL Kalitta Air Top Fuel dragster out in front and a flawless pass at 3.699 seconds and 330.47 mph handed him the win light.

“That was a great win for the DHL Kaitta Air Toyota team,” said Langdon. “We have been making lots of changes and improvements. These guys are really doing a great job and you saw the results of their hard work with our qualifying runs and that win in the first round.”

Facing another tough opponent in the quarterfinals Langdon was giving up lane choice but he knew he had a race car that was very competitive. Off the starting line Langdon was right beside his opponent and both cars were rapidly accelerating down the Wild Horse Pass Motorsports Park track. As the finish line closed in on Langdon his dragster dropped a cylinder and he lost just enough power to drop him back in his lane.

While he didn’t get four win lights Langdon will leave Arizona with a victory of sorts as he moved his DHL Kalitta Air Top Fuel dragster into the final spot in the Pep Boys Allstar Callout specialty race in two weeks at the NHRA Gatornationals. He will have a chance to race for $130,000 and the honor of being the first Pep Boys Callout champion.