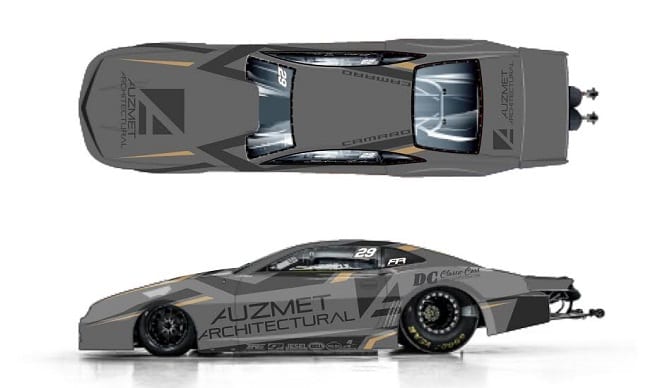 Tucker took a year and a half hiatus from behind the wheel in 2015 to dedicate the entirety of his time to expanding his company Auzmet Architectural in the Dallas, Texas area.

“After the U.S. Nationals in 2014, we had a huge architect firm named Boka Powell approach us after the companies Principal Don Powell who happens to be a huge NHRA fan himself, notice our car on the television broadcast,” said Tucker. “They did some research on us and told us if we wanted to set up our company in the states, Don suggested Texas being the market.”

“I flew out to Dallas and met up with Don and his wife Cindy before the Dallas race. After that race, I knew if we were going to make this work, I needed to be 100% focused on it and not have any distractions,” admitted Tucker. “The racing is a full-time business in itself so my father Rob and I decided to park the race team and focus on Auzmet US. We opened in June 2015; we’ve got 15 employees here and 45 back in Australia with a third office also opened in Melbourne earlier this year.”

Tucker has grown up as a regular fixture in the ANDRA (Australia National Drag Racing Association) racing alongside his family. Now with 10 NHRA national events under his belt, he’s ready to take on the new electronic fuel injection.

“Electronic fuel injection has been around for years in Australia,” said Tucker. “From my side of it, it’s very exciting. Coming back with fuel injection is sort of like starting over again. It’s been over a year and a half since I let the clutch out, so with a bit of luck I might have forgotten all my bad habits when driving carburetor cars. Hopefully it’s like riding a bike and it will all come back to me when the door closes. It’s a new era and I think this is just another way the fans are going to relate to Pro Stock.”

Tucker plans to test his Auzmet Architectural/Rob Tucker Racing Chevrolet Camaro the week of the Lowes Foods NHRA Four-Wide Nationals and is currently on the entry list but may possibly withdraw due to his fiancé Rebecca being weeks away from giving birth to their second child.

“If the doctor says she’s ready, I’ll go back to Australia. This one is non-negotiable!” laughed Tucker. “Regardless, we plan on running from Indy until the end of the year. If all goes to plan, I’d like to run a full season in 2017.”