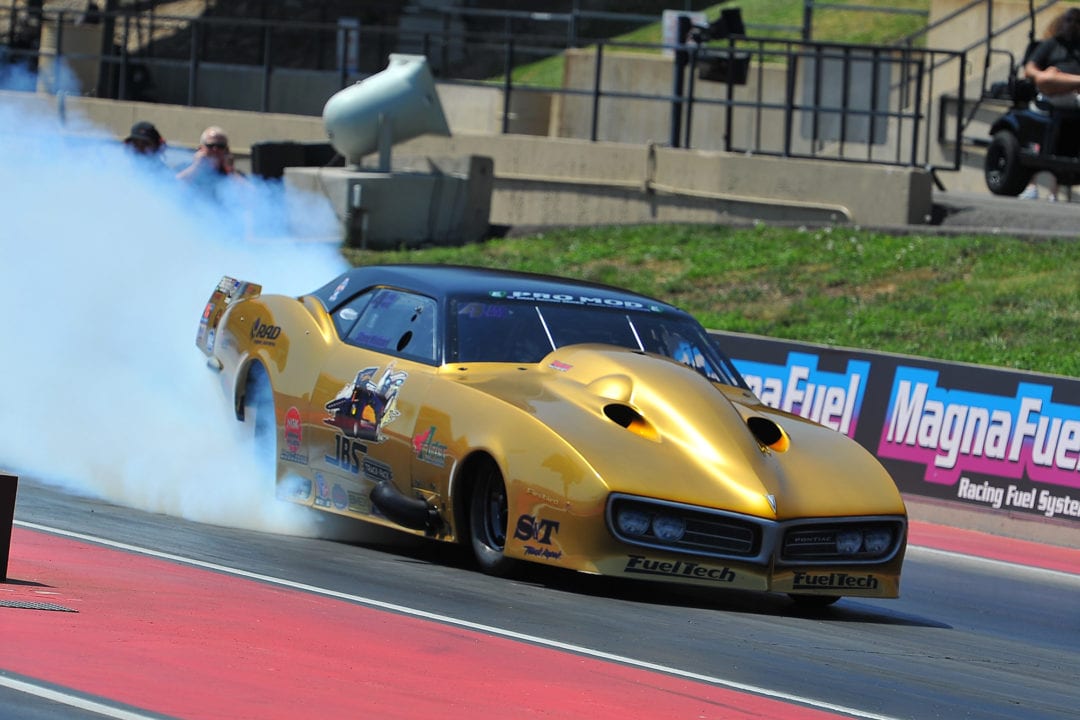 The scoreboards were shut off, but the smiles on the face of Shane Molinari’s team told the story.

Back in the car for the first time in two months, Molinari had arguably the most impressive run during Wednesday’s test session for the DRAG ILLUSTRATED World Series of Pro Mod at Bandimere Speedway.

Molinari’s stunning turbocharged ’68 Firebird blasted off the starting line during the late afternoon run, making a clean and stout pass down the right line.

It stole the show on the second day of testing and Molinari, who was consistently among the quickest races during last year’s inaugural race, was pleased with the impressive start to the event.

It was pretty stellar,” Molinari said. “It was a good start and we’re going in the right direction. It’s the first time I’ve been in the car in a couple months, so to make a full pull and have a good hit like that, it’s a bonus for everybody.”

Molinari came out swinging and the strong start left the team in a strong position on Thursday. Standout crew chief Brad Personett said the team had a number of thoughts in mind to work off Wednesday’s blast, with most of it building consistency leading into raceday.

The scoreboards will remain off on Thursday and during Friday’s shakedown runs before being turned on for eliminations.

“It was a pretty good run, so now we’re just trying to change a couple things and make some more laps,” Personett said. “It confirms we’ve got a good set-up, so now we just have to make it more reachable.”

Molinari last raced at the NHRA Pro Mod race in Richmond, but missed the next two races in Bristol and Norwalk as Eric Dillard filled in for him.

Back in the seat at the biggest and richest Pro Mod race in the history of the known universe, Molinari looked like he hadn’t missed a beat.

“He did a damn good job, I can tell you that much,” Personett said.

Molinari hoped the pass sent a statement to the rest of the all-star lineup on Thunder Mountain, and it’s a message that indicates the Battle Ground, Wash., native is among the favorites to win the $100,000 payday.

Molinari had a supremely competitive car a year ago at Bandimere Speedway before losing to eventual winner Mike Bowman in the semifinals.

“This place, it’s just great. It doesn’t get any better than this,” Molinari said. “The people are great, the track is awesome. It’s just a great event. We know how to go fast, we just have to make some good runs and see what happens.”

The plan for Thursday was to run as late in the afternoon as possible to hopefully replicate the conditions for Saturday’s first round of eliminations, which are slated to begin at 3:45 p.m.

The rest of eliminations take place later in the evening, but Personett knows worrying about that is irrelevant if the team isn’t prepared right off the bat.