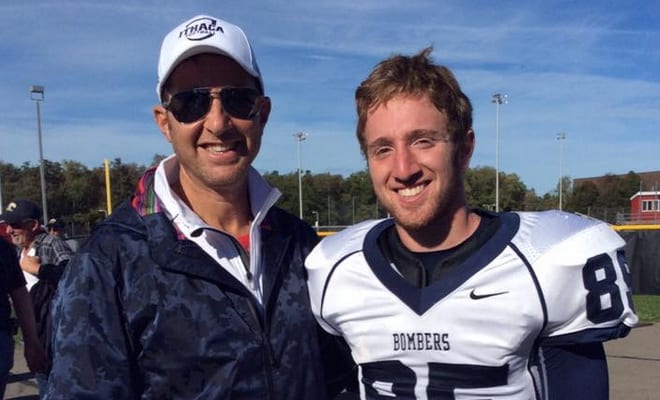 Justin Ashley, 21, plans to chart his own path in drag racing and luckily for him he has a good mentor to provide advice along the way.

Ashley (above right), son of two-time Pro Modified champion Mike Ashley, will make his competition debut this weekend (Apr. 7-9) in the Professional Drag Racers Association (PDRA) Spring Nationals at Rockingham, North Carolina, behind the wheel of Barry Brown’s Top Dragster entry. A graduate of the Jr. Dragster ranks, Ashley said this weekend is the result of many years working toward the ultimate goal of becoming a national-event drag racer.

“Now that I’m getting ready to graduate from college the opportunity is really presenting itself,” said Ashley, a senior at Ithaca College majoring in business. “I just want to go out there and compete.  I love the whole competition aspect of being an athlete and I like the idea of competing at the highest levels; that part really excites me.”

While Ashley said his father, who helped pioneer the Pro Modified division, is both his hero and inspiration in life, at this point in his career he places importance on charting his own path toward a future as a professional drag racer.

“He wouldn’t have it any other way and neither would I,” said Ashley. “I think watching my dad race was a blessing and privilege, but I really want to establish my own identity.  There are parts of what he taught me that I’m going to carry with me, and he’ll be with me along the way to teach me and help me grow.  To me, the challenge will be in finding a way to separate myself for my own identity as I go along.”

Ashley already has experienced success through positive thinking, and a relentless drive to succeed outside of the cockpit. An undersized player at 5-foot, six-inches tall and 165 pounds, Ashley earned a spot on the roster of the Ithaca College football team, an NCAA Division III squad.

“The lessons that I learned on the field are very similar to what I’ve learned on the track and it helped me grow a lot as a person which is something that I can translate to racing,” he said. “Just like in football or any other sport, it’s not steady and there are lots of ups and downs.  Some days you’re going to do good and some days you’re going to do bad.  Sports have mainly taught me to maintain that steady level and stand straight throughout those times.  I’m really able to translate that mentality to drag racing.  I have to stay focused on the task at hand, no matter what’s going on.”

And while Ashley’s father was known as a pure driver whose talents allowed him to drive as close as one can get to the edge without lifting, the kid plans to take a more methodical approach. In other words, he’s not planning to run 210 miles per hour through the grass like his famous dad did once at Englishtown, New Jersey.

“Yeah, I think I’ll lift, heaven forbid if I ever get in that situation,” Ashley said. “But if there was anybody who could pull that off it was my dad. I think I need a lot more runs to get to that point.”