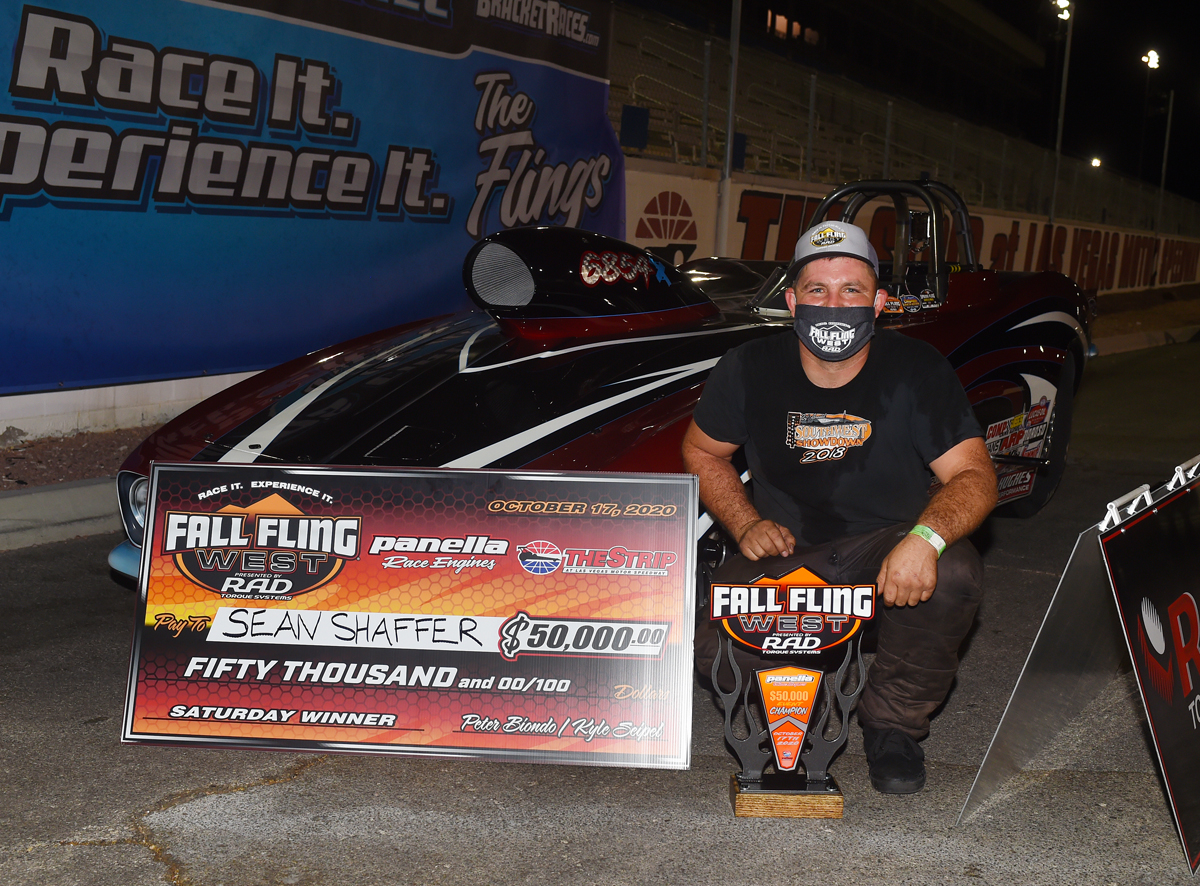 Day #3 of the Fall Fling West presented by RAD Torque Systems raced into action Saturday morning with a Run for the Money time trial.  Next on the schedule was the Panella Race Engines $50,000 main event.  In addition to the main event, race promoters Peter Biondo and Kyle Seipel added a 64-Car $10K Shootout to the program.  The Shootout was reserved for racers who did not advance to round three of the $50K.

As we moved through eliminations, racers looked to collect the Goethe Enterprises Bounty Award by taking out Friday’s $10K winner Chris Northup.  With the sun setting behind the mountains, eleven racers returned for round six of the Panella Race Engines $50K.

With six cars remaining in the Panella Race Engines $50K, Northup and Carr opened eliminations.  Carr was .011 take .025 to breakout .005 sending Northup to the semifinals.  Northup’s .009 light left put him in contention for the semifinal bye.  Shaffer, in his roadster, stopped a red-lighting Coltrin to advance one of his entries to the semifinals.  Bottom bulb racer O’Moore then squared off against Shaffer in his dragster entry.

If O’Moore wins and post a .008 or better reaction, he gets the bye to the final.  If not, Northup goes to his second consecutive final round.  A win by Shaffer would see him race himself in the semifinals.  Shaffer grabbed the advantage off the line, .005 to .025, and cruised to a two over 4.853 to move two entries into the semifinals.

With Northup on the bye and Shaffer owning the other two entries, the semifinal round was skipped, and we moved directly into the final round.  After a short negotiation on the split, the two childhood neighbors and Idaho residents faced off in the Panella Race Engines $50K final.

The Shootout final paired Marcum, another Idaho based racer, against Wamboldt from Colorado.  Wamboldt took full control off the line grabbing a .005 to .026 reaction time advantage.  That advantage allowed Wamboldt’s 4.736 on his 4.72 dial to stop Marcum’s one over 6.777 lap.