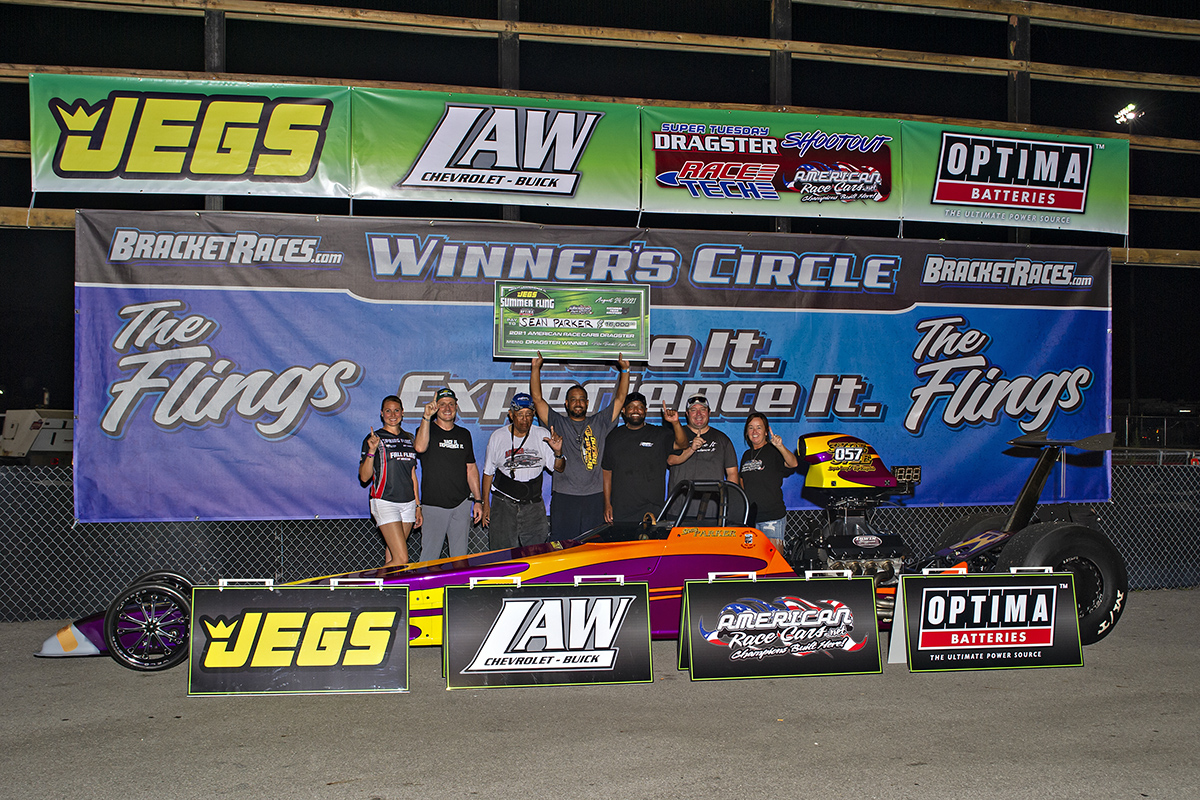 The sun rose above National Trail Raceway on the first day of the inaugural Summer Fling, illuminating the prominent black and yellow of JEGS Performance branding across the facility. The air was thick with both humidity and excitement for an installment of the Fling franchise in a new region of the country.

The early half of the day saw Bob Brockmeyer of Compulink giving the timing system a “freshen up” to be sure the Fling Racers would get an even playing field for this week’s racing. TruStart, his “Worst Red” invention, would also be implemented during the event as is at all Fling events. Once Brockmeyer’s work was complete and the National Trail Raceway staff concluded their track prep, racers were given the opportunity to make as many runs as time allowed during the Law Chevrolet and Buick Test and Tune between rounds of the American/Race Tech Super Tuesday Dragster Shootout.

As is tradition with this shootout format at the Fling events, the two finalists would earn a dragster chassis valued at $16,000 — with the winner having their choice of builder. The randomly selected 32-car field consisted of a balance of past event winners, Fling regulars, and local racers.

Third round put competitors on a ladder with Donovan Williams and Jim Glenn staging up first, which ended quickly after Williams’s redlight by just sixth thousandths. Jeff Serra advanced past Troy Coughlin Jr. using a .014 advantage on the tree and taking .014 at the stripe. Vinny DiMino earned a place in the semifinals after he was nine thousandths ahead of Josh Gnandt on the starting line. Sean Parker rounded out the quarterfinals using a .005 reaction over Scott Taylor. 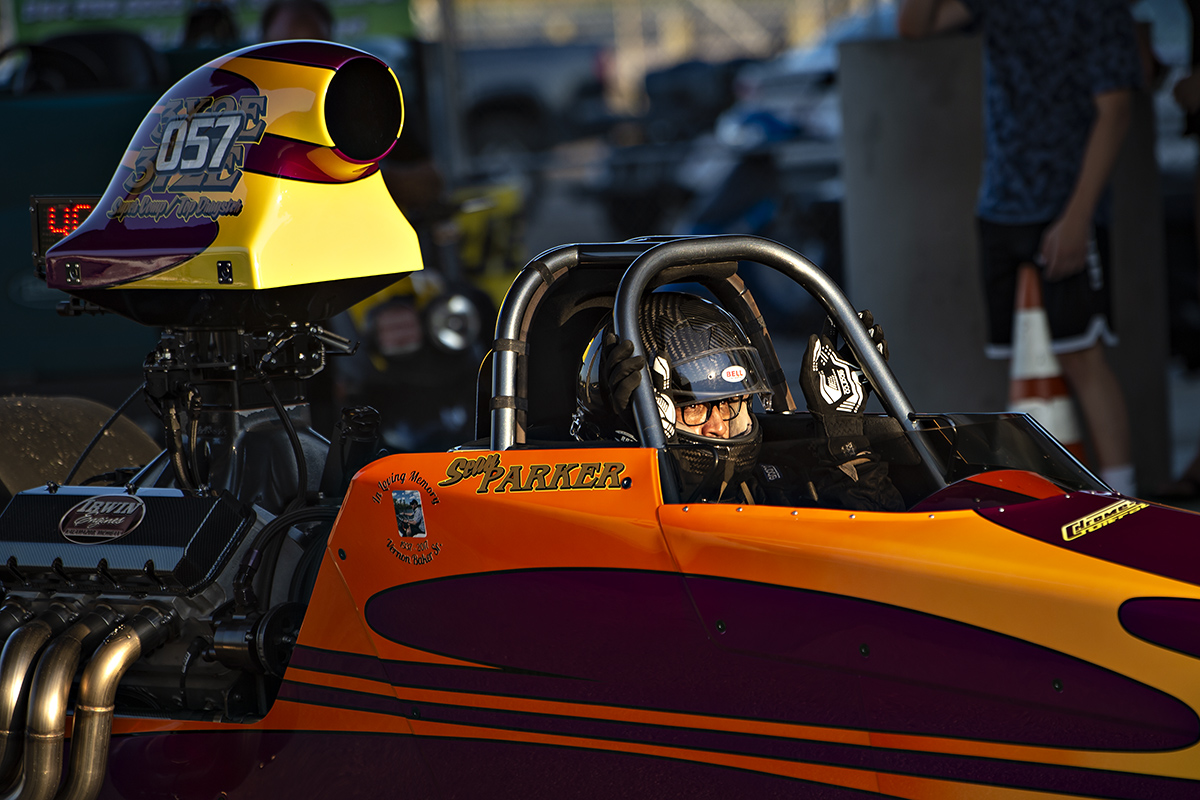 Although he ran “dead-on” three, DiMino was locked out by Parker’s .033 advantage on the tree in the semifinals. Four thousandths separated Glenn and Serra, but Glenn took five thousandths too much to run 4.735 on the 4.74 dial.

The track lights gleamed off the racing surface as the finalists rolled up to the line for bragging rights and their choice of dragster. The shootout winner was determined at the tree by the .006 red of Serra, and so Parker selected the American dragster. 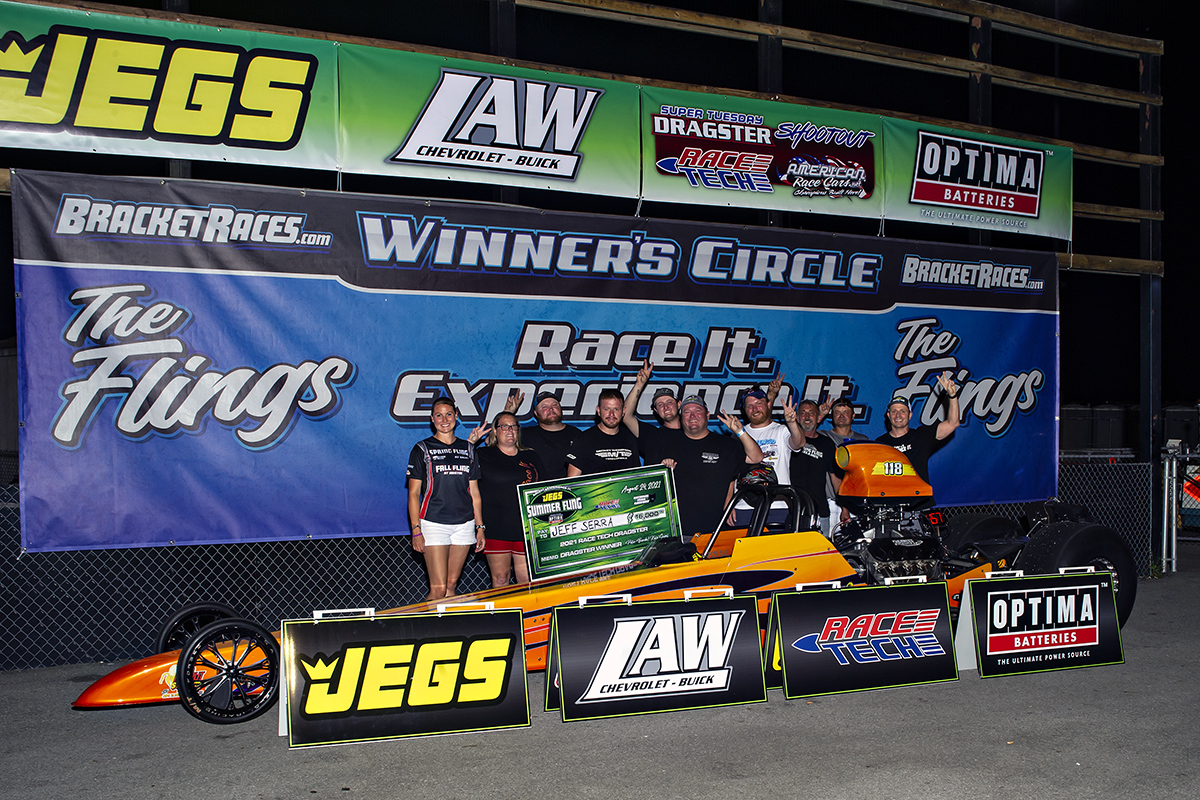 Fuel System Technology Carburetors 15K Wednesday will kick off at 8:15 a.m. with a time run starting with door cars. The time run session will be open to all drivers regardless of whether they participated in the Tuesday test and tune. Racer appreciation prizes from leaders in the industry will be given out from the prize vault including helmets, weather stations, dragster scoops, and more.

You can follow all the action from the JEGS Performance Summer Fling presented by Optima Batteries live at www.MotorManiaTV.com thanks to Strange Engineering.

For more information, visit www.BracketRaces.com, the Spring Fling Bracket Races Facebook page, or text the word “COLUMBUS” to 74121 for race info and updates.