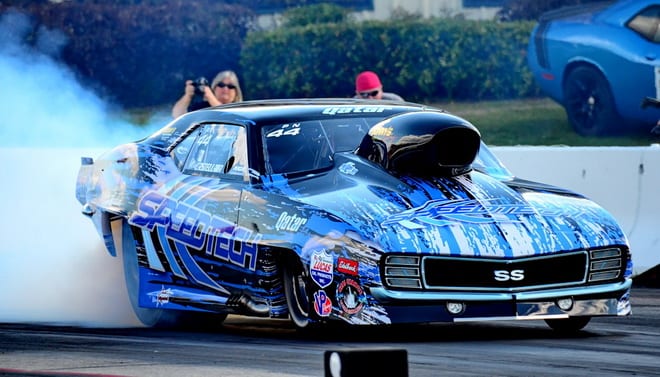 Beneath a full moon shining brightly over the flatlands of northwestern Louisiana, Jason Scruggs and Mike Castellana (above) scored victories May 2, in Pro Extreme and Pro Nitrous, the top two classes in the inaugural PDRA Cajun Nationals at Thunder Road Raceway Park, near Shreveport. It marked a welcome change for both former class champions as neither had previously reached victory lane with the all-eighth-mile Professional Drag Racers Association since its inception early last year. 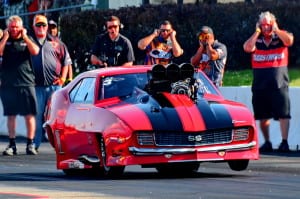 Jason Scruggs, from Saltillo, MS, started from the number-four slot on the 16-car NAS Racing Pro Extreme list after running 3.57 seconds at 217.63 mph in qualifying his ’69 Camaro. Brandon Snider was the top qualifier after going a career-best 3.54 in his own ’69 Camaro.

Scruggs got progressively quicker and faster with each elimination-round win, opening with a 3.59 at 212.83 to beat Todd Tutterow, winner of the previous PDRA race last month at Rockingham, NC. Next came a stripe-to-stripe, 3.57-at-217.14 win over Mustafa Buhumaid, who won the season opener in March at Ennis, TX. In the semi finals, Scruggs met up with Snider and overcame a sizable .042 holeshot to win in 3.54 seconds at 218.37 mph. “I was a little slow on the tree against Brandon, but he shook and our car went a .54, so that was lucky,” Scruggs admitted. 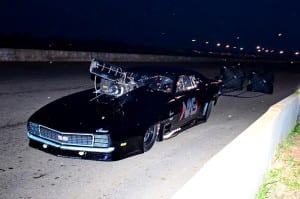 Badir Ahli banged the blower on his NAS Racing ’69 Camaro just as he crossed the line in 3.601 seconds at 209.20 mph in a Pro Extreme quarter-final win over Frankie Taylor at the PDRA Cajun Nationals.

That left only the final and NAS Racing driver Badir Ahli between Scruggs and his first PDRA trophy. Ahli, who started his ’69 Camaro sixth after a 3.60 at 211.93 qualifying run, had beaten Don Wootton, Frankie Taylor and Wesley Jones in the preliminary rounds.

With lane choice for the final, Scruggs went against the grain and went with the right lane, despite having a little trouble seeing the starting tree from that side.

“I lost lane choice for the semis, but when we went a .54 in the right lane I decided to just stay there for the final against Badir. I was having a little trouble seeing the tree from the right lane, though, because of a bar near the window, so I was having to stick my head out to the right side of the cage just to see it. That’s what made me late against Brandon,” he explained.

Last year, in the PDRA’s first season, Scruggs was number-one qualifier at five of eight races; however, never managed to win any of them. This year, he opened the schedule with a number-three qualifier at Dallas and started number one in Rockingham–but lost both times in the opening round of eliminations.

“I was beginning to think I was jinxed,” Scruggs said later. “And when you start trying too hard bad things happen, so I’m happy to finally get that out of the way and now we can just go race and have a good time.” 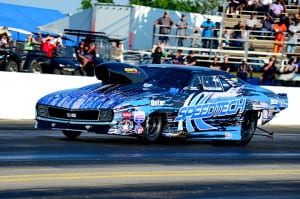 With a 3.82 pass at 192.25 mph, Mike Castellana qualified his Speedtech ’69 Camaro ninth at the PDRA Cajun Nationals. Leading the way in the Switzer Dynamics Pro Nitrous class was Jay Cox with a 3.73 run at 200.68 mph, which stood up as low ET and top speed for the weekend.

“I honestly couldn’t tell who won at the end, but then I saw my win light was on,” the New York native said. “I actually thought he won, I really couldn’t tell.”

Crew chief Shannon Jenkins said Castellana drove “perfect” in the final and the win reflected a true team effort. “We’ve been trying some new stuff and it’s starting to come together,” he said. “Hopefully this is just the start of a lot more races like this for us.”

Castellana echoed that thought. “We knew if we could get it all together we would have a car that could win. Shannon did an awesome job putting everything together,” he said. 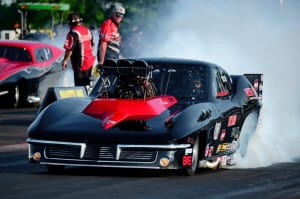 The weekend at Thunder Road Raceway could not have gone any better for Gerry Capano and his Greenville, DE-based team. After running a then-career-best 3.86 at 193.68 mph to capture his first Precision Turbo Pro Boost pole, Capano and his supercharged ’63 Corvette remained consistent and got even quicker and faster through four rounds of eliminations.

He opened with a 3.87 at 193.77 win over Californian Scott Oksas in round one, then posted 3.82 at 193.63 to beat John Strickland in round two. Next was a 3.81 pass at 193.40 that overcame a huge .120 holeshot by Tylor Miller in the semis and sent Capano on to face Strickland’s teammate Kevin Rivenbark and his ’67 Mustang in the final round. Rivenbark, who started from the number-six position, had put Brian Hicks, Steve Summers and Ric Fleck on the trailer in the preliminaries.

Rivenbark, who had won twice in two prior PDRA final-round appearances, moved first with a .041 reaction time, but his .026 advantage was soon erased as Capano ran a straight and smooth 3.80 at 194.18 mph to handily defeat Rivenbark’s back-pedaling 3.91 at 192.30 combination.

“Man, this is awesome,” Capano excitedly declared upon exiting his car at the top end of the track. “I have to thank my crew and sponsors and especially my wife, Heather, for all of their hard work. We’ve never had a day like this before. The car just went A to B and got the job done. He got out on me a little there, but once we got to the 330 I didn’t see him anymore. It’s just awesome!” 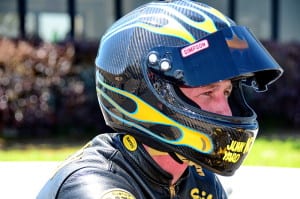 With so many first-time victors at Thunder Road Raceway, it was left to multi-time class champion and defending Drag 965 Pro Extreme Motorcycle champ Eric McKinney to represent the veteran winners at the Cajun Nationals. The Hamersville, OH-based rider kept his perfect record in 2015 intact with his third number-one qualifier and third event win in as many races.

He had been scheduled to face teammate and tuner Ashley Owens in the final, but at the end of Owens’ semi-final win over Terry Schweigert, his bike’s steering jammed at the top end and its front tire slid sideways as the bike leaned over, scraping the right frame rail along the track in a 150-mph shower of sparks.

“We had just run and I was by the scales when Ashley came by with the sparks flying,” McKinney described. “It wore a hole in the bottom of the frame and knocked the exhaust off, so there’s no way he could’ve run.

“I really don’t want to win like that, but we had a good weekend here,” he continued. “Sometimes it seems like we have to overcome a lot of stuff but the bike ran really good all weekend here; no problems at all.” 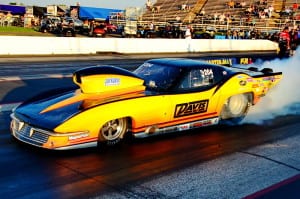 An influential figure in Top Sportsman after many years in the IHRA and NHRA, Ronnie Davis was instrumental in getting PDRA to adopt the class and served as a sounding board to series officials regarding rules and procedures. However, until the Cajun Nationals securing that first PDRA win had proven elusive for the golf cart dealer from Suwanee, GA.

“I like to have at least one win with everyone I ever race with and this was the only one I was missing, so we got that and now we’re ready to roll,” Davis said after defeating defending class champion Dan Ferguson in the final round.

Davis qualified second behind rookie Tricia Musi with a 3.99-seconds pass at 181.11 mph in his ’63 Corvette, then beat Cheyenne Stanley, had a second-round bye, and outran Earl Folse in the semis. Ferguson, meanwhile, started fifth and defeated Keith Hollenshead, Musi, and Bob Gulitti to reach the final.

“I really didn’t think there was any way it could go quicker than 4.09 so I ran it out the back door,” said Ferguson, who won the 2015 PDRA season opener at Dallas in March. “All I had to do was dump it at the finish line, so I gave that one away.”

Davis revealed his engine was hurt before the second round, but it lasted just long enough to secure the win.

“We hurt a lifter in the second round, patched that up and we ran the semi finals, then we repatched it up for the final and it was squeaking so bad up there that Todd Tutterow came up giving me the broke signal with his hands before we ran,” Davis said with a laugh. “I was already doing pretty good in the points here so this should really help us out, too. We’re really happy about that.” 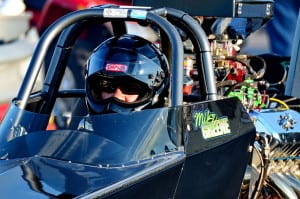 Another first-time winner got the job done in Dart Machinery Top Dragster at Thunder Road, as Mike Greene of Burleson, TX, survived from the number-11 qualifying spot to beat number-12 starter Derrik Sholar in the final.

That left only the final, where a 4.16 against his 4.13 dial in got the job done for Greene as Sholar also broke out by a hundredth under his 4.22 dial in.

In the Huddleston Performance Junior Dragster ranks, fourth-place qualifier Brooke Heckel of Cove, TX, won the 7.90 index Pro Jr. Dragster class with a 7.90 run at 80.72 in the final over number-nine starter Preston Tanner, who broke out at 7.89 and 80.78 mph. The Huddleston Top Jr. Dragster final saw Scottie Taylor, son of PDRA Pro Extreme star Frankie Taylor, take the win with an 8.97-seconds pass at 72.91 mph on an 8.95 dial in over number-one qualifier Mia Schultz, who dialed in at 8.79 and ran 8.80 at 75.88, but left .077 later than Taylor off the start.