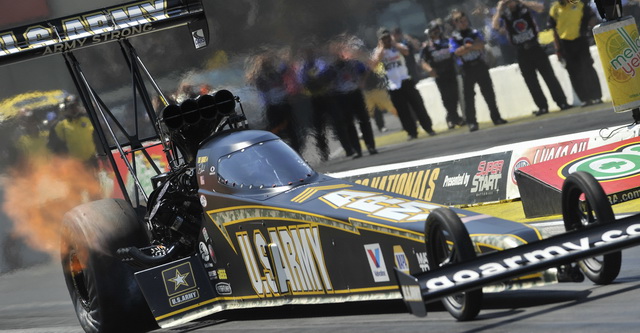 One year ago at the Chevrolet Performance U.S. Nationals Tony Schumacher was able to put one of the big questions circling around his NHRA Top Fuel career to rest. He finally broke the tie with “Big Daddy” Don Garlits to become the winningest Top Fuel driver at the world’s most prestigious drag race.

For his efforts, Schumacher gets to answer one more big question this season: When is he going to break the tie with another NHRA legend – Pro Stock great Bob Glidden – and become the winningest driver ever at the Big Go? 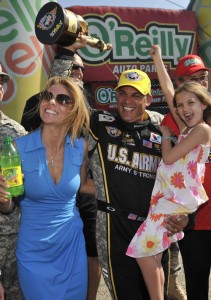 For Schumacher, who has won the Chevrolet Performance U.S. Nationals an amazing nine times in 11 final rounds during his career, he doesn’t think there is any time better than the present.

Schumacher is still riding the momentum from last year’s victory at Lucas Oil Raceway Park at Indianapolis and feels confident he can move ahead of Glidden. Mike Neff (Funny Car), Dave Connolly (Pro Stock) and Andrew Hines (Pro Stock Motorcycle) joined Schumacher in the winner’s circle at the iconic event in 2012.  The Chevrolet Performance U.S. Nationals, the final race of the regular season in the NHRA Mello Yello Drag Racing Series, will be contested Aug. 28-Sept. 2 at the multi-purpose motorsports facility located just west of downtown Indianapolis. Once again, the race will be showcased nationwide on ESPN2 and ESPN2HD during more than 10 hours of coverage.

“To have the chance right now, we’re sitting on an opportunity to win ten U.S. Nationals,” Schumacher said. “No one has ever done that before, and I think that plays into our benefit.  We’re better with the pressure on.  That’s when our team has been great.”

Schumacher enters the 59th annual running of the tradition-rich event third in the Top Fuel points standings with three victories in six final round appearances behind the controls of his U.S. Army dragster. His seasoned crew, led by crew chief Mike Green, has a great feel for the track, and according to Schumacher, a knack for delivering the goods when it counts the most. 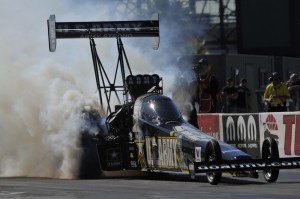 Schumacher says just being mentioned alongside drag racing immortals like Glidden and Garlits turns into a pinch-me moment for the seven-time world champion.

“It sure puts you in an elite group,” Schumacher said. “There’s only two of us now that can say that (we’ve won Indy nine times). I’m honestly not showing up to Indy to take Glidden’s record. I’m trying to win the race. If you do your job, those records will come.”

Schumacher has earned a lot of records during his 17-year career in NHRA. He says once he retires he’ll check everything out to see what he was able to accomplish. For now, he’s just focused on winning more races and championships. He hasn’t had too much time to reflect on his achievements.

“When you start thinking about what number wins you are at or who is next, you can start making mistakes,” Schumacher said. “As far as I’m concerned, I am showing up to be a machine. The light comes on. Go. Over simplify. It’s a dragster. I have guys around me that have to make my U.S. Army car very special at that moment and I have to make zero mistakes. So thinking about all of the records that could be out there is probably more harmful than it is good.” 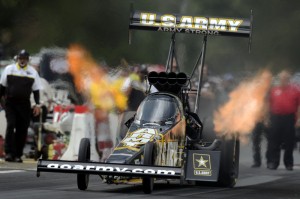 In order for Schumacher to win, he will need to hold off series points leader Shawn Langdon, a four-time season winner, along with another four-time season winner, Spencer Massey. Defending world champion Antron Brown, ultra-quick Doug Kalitta, Clay Millican, Morgan Lucas and Khalid alBalooshi are also among those to watch in the 8,000-horsepower category. Steve Torrence, Bob Vandergriff and David Grubnic will not only be looking for a race victory, but the trio also will be in the hunt to secure a post-season playoff position.