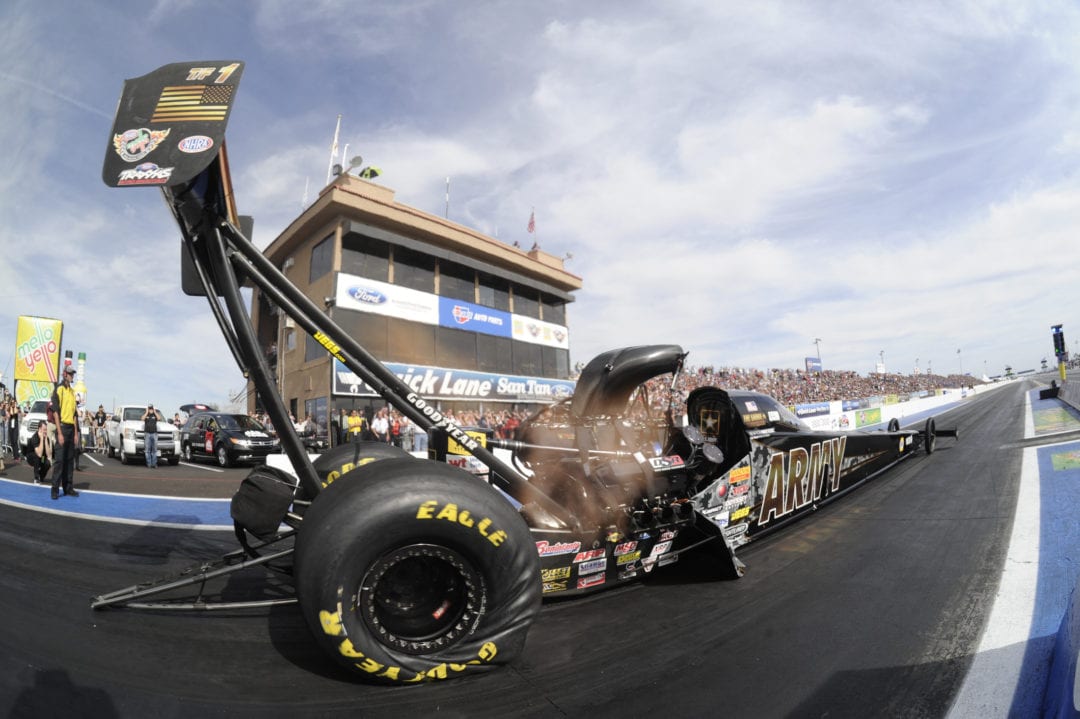 Schumacher powered his U.S. Army dragster to a career-best performance of 3.722 seconds at 325.61 mph during Friday’s second session. In addition to the track record on Friday, the four-time Phoenix winner also had one of the quickest dragsters during Saturday’s two sessions, posting a pair of low 3.7-second runs.

“It is great that we went down the track on all four runs and got every point except one,” Schumacher said. “It is more impressive that the run was my career-best. The car is making good, quality runs down the track and it is being consistent. If we can continue to do that we’ve got a good chance of going out and winning some races.”

The eight-time champ will face Jenna Haddock in the first round of eliminations as he looks to get his season on track after a disappointing first round loss at the season-opener two weeks ago in Pomona. The round is a rematch from last year’s Denver race when Haddock defeated Schumacher in her first career start.

“We’ll go out there and do our job, not try to smoke the tires in the first round like we did in Denver,” Schumacher said. “That was an exciting win when she beat me in Denver – I just don’t want her to get used to it.”

Reining Funny Car world champ Hagan powered his Mopar Express Lane/Rocky Boots Dodge Charger R/T to a track record time of 3.978 at 320.28 mph as he is seeking his second victory of the season.

“It speaks volumes of why we are a championship team,” said Hagan, who will meet Jeff Diehl in the opener. “I have a great crew and race car and I am blessed to be able to drive the wheels off it. That thing was just really digging and posted some great numbers. This team continues to grow and we are really coming together and have great chemistry. I am very excited what this year has to hold for us and I think we are going to win a lot of races this season.”

Friday leader Courtney Force will start from the second spot in her Traxxas Chevy Camaro SS and face rookie Shane Westerfield, while third qualifier Del Worsham will race rookie John Hale in the opening round. Eight-time Phoenix winner John Force qualified seventh in his Peak Camaro and will meet teammate Robert Hight in the opening round. Last year’s winner here, Alexis DeJoria, qualified fourth in her Patron Cafe XO Incendio Toyota Camry and will pair up with Tony Pedregon in the first round.

In Pro Stock, Enders-Stevens earned her 14th career No. 1 and second of the season with her Friday best of 6.545 at 211.20 in her Elite Motorsports Chevy Camaro. She will open against Joey Grose. 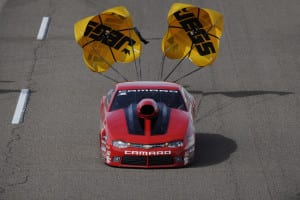 “It’s just a great start to the year for an entire Elite Motorsports team, a better start to the year than we had in 2014, so I’m really proud of them,” Enders-Stevens said, who won this race in 2013. “It would definitely be great to win early in the year. It, obviously, doesn’t determine where you end up, but it certainly helps boost confidence and morale, but I’m really blessed with a team where we always have fun no matter what. It would be great. I mean, I would never turn down a win, for sure, but to start off early, it would be wonderful.”