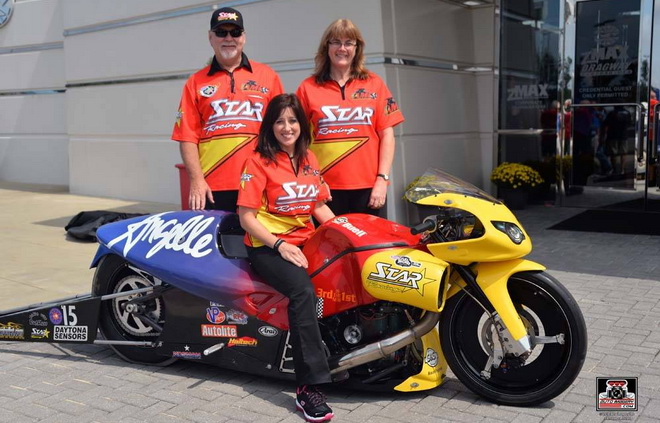 In her mind, Angelle Sampey-Drago was happily retired. But after a trip to an NHRA Mello Yello Drag Racing Series event earlier this year, the itch to compete started to come back. When the team that gave the winningest female in NHRA history her start in Pro Stock Motorcycle called asking her to return to competition, Sampey-Drago knew she had to at least consider it. 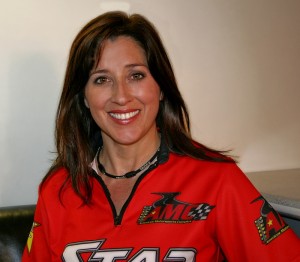 After getting the full support of her family, the three-time PSM world champion knew it was time end her retirement. Sampey-Drago and George Bryce’s Star Racing team announced the return of one of the sport’s most popular drivers during a press conference at last weekend’s Pep Boys NHRA Carolina Nationals in Charlotte.

Sampey-Drago and her Star Racing team won’t waste any time in getting back on the bike, either, as she will make her first appearance since 2008 at this weekend’s 29th annual AAA Texas NHRA FallNationals at the Texas Motorplex.

“I never thought I was going to be back here again,” said Sampey-Drago, who has 41 career wins. “When I retired seven years ago I really thought that was it for me. As the years went on I started thinking about it. I went out to Houston (in April) and there was something about being there. I had my little girl with me and she loved it. This is such an awesome family sport and I thought maybe I could do it.

“It’s pretty awesome. It’s a whole new perspective on how awesome this is going to be. I’m looking forward to the fun of it this time around, the fun of sharing it with my family and especially my little girl.”

Star Racing wanted something big to celebrate its 35th year in racing in 2015. Enticing Sampey-Drago to end her retirement qualifies as that, but an opening on Star Racing’s two-bike team made her first appearance much more immediate. After being away from the sport starting in 2009, Sampey-Drago had her doubts about returning to racing. With her family firmly on board, it took 10 passes over a two-day test session to convince her that she was still capable of competing at a high level.

Sampey-Drago’s legacy was firmly secure when she retired following the 2008 season where she finished in the top five for an incredible 12th straight year. After making her debut with Star Racing in 1996, Sampey-Drago went on a remarkable tear, winning three straight championships from 2000-2002.

“That’s the main reason why I did say yes,” Sampey-Drago said. “If I had the title of the winningest racer I don’t think I would have anything else to accomplish. I accomplished every goal I wanted to except I didn’t win those four races to tie Dave and five to beat him. I know with the way the competition is now it could take a while to get that, but I can’t do it if I don’t try.”

Going as quick as 6.90 seconds in testing – not far off her career-best pass of 6.871 – showed her the potential to run well is there. But the two-day test session also validated something else that was just as important heading into Dallas.

“I don’t think I’ve lost the desire or drive,” Sampey-Drago said. “I think I still have the passion. I didn’t know if I did until we went testing. But when we went that 6.90 and I started screaming, I knew I still had the desire. Whether I still have the capability we will see. It’s going to be a work in progress. I have to get used to the bike and the competition again. I have a lot to learn and get back into and that’s why we wanted to start as soon as the opportunity opened up.”