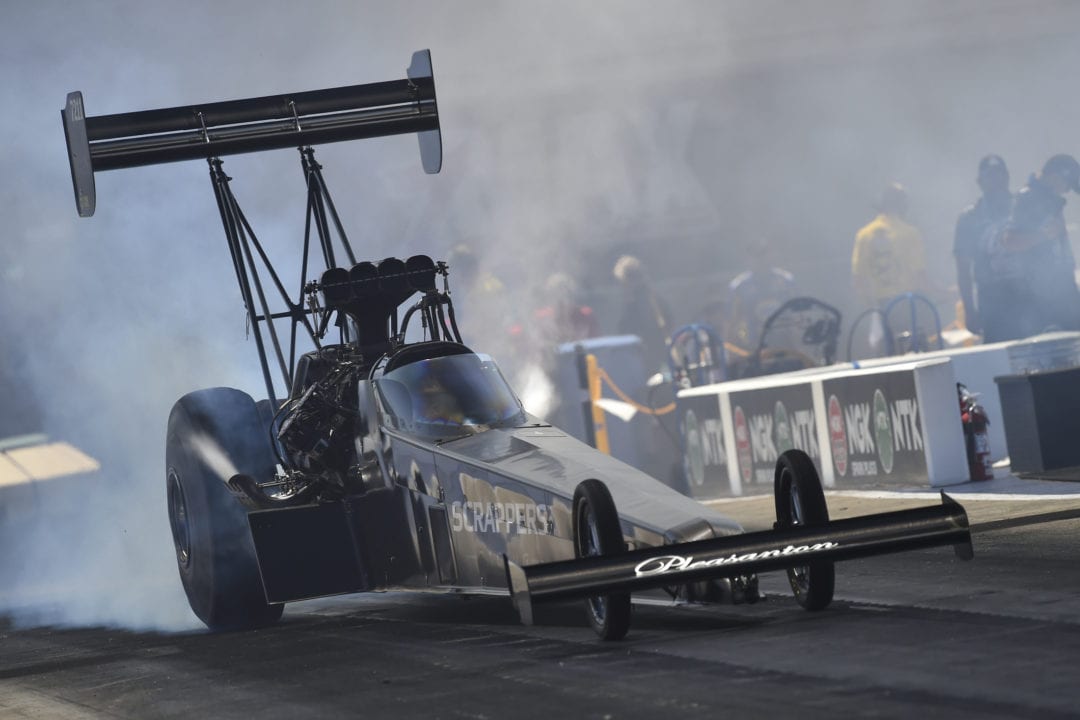 The ladders are set for eliminations at the 10th annual NGK Spark Plugs NHRA Four-Wide Nationals. Mike Salinas, who recently won his first Top Fuel event in the NHRA Mello Yello Drag Racing Series, secured his No.1 qualifier position with his run from Friday night when he set the track E.T. record at zMAX Dragway. This will be only the third time in his career to start eliminations from the top spot on the ladder.

Robert Hight (Funny Car) and Karen Stoffer (Pro Stock Motorcycle) are also top qualifiers in their respective categories at the sixth of 24 events of the 2019 NHRA season.

Salinas powered his Scrappers Racing Dragster to the top of the field with a pass of 3.687-seconds at 327.43 mph. Antron Brown came in second with his run of 3.725 at 327.03. Terry McMillen nabbed the third spot running 3.728 at 320.36. In Top Fuel this season, the No. 1 qualifier has gone on to win the event three out of five times. Salinas won the Four-Wide event in Las Vegas from the top spot and hopes to repeat that outcome today.

“We knew (on Friday) that the track might not hold much,” said Salinas. “Alan (Johnson, tuner) is a genius at what he’s doing and the nice part about it is the car did exactly what we wanted it to do, getting us into the number one spot. All in all I think we had a great run right off the trailer from our disappointment in Houston.” 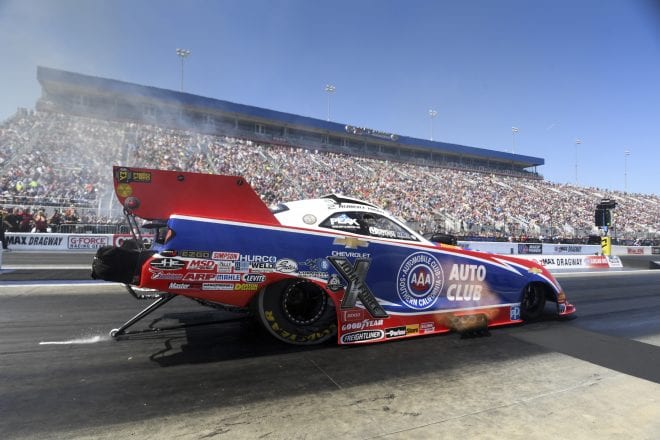 Hight piloted his Auto Club of Southern California Chevy Camaro SS Funny Car to the top position in the final qualifying round on Saturday with a pass of 3.883 at 325.92, earning his fourth No.1 qualifier this season. He’s won the Four-Wide event at zMAX once before, in 2014 and hopes to continue the positive trajectory he’s experienced this season. Jack Beckman sits in the No. 2 spot with his run of 3.891 at 321.42. John Force landed the third position on the ladder with his pass of 3.905 at 329.42.

“I don’t think I’ve ever in my career had a car that’s this dominant,” said Hight. “When you really look at how competitive the class is, from one to twelve, there’s just hundredths of a second separating us. It’s pretty amazing for us to be running this well and it makes my job pretty easy. You know that this car is going to go down the track as long as you don’t screw it up.”

While Stoffer landed the provisional No. 1 position in Pro Stock Motorcycle on Friday night, it was her first pass of Saturday morning that secured the low E.T. of the event, 6.793 at 197.91 on her Stoffer Enterprises Suzuki. This marks the first time in four years for Stoffer to begin eliminations at the top of the ladder. With an impressive run of 6.802 at 196.10, Hector Arana Jr. is right behind Stoffer in the No. 2 position. Andrew Hines is third with a pass of 6.811 at 199.05. In the final round of qualifying, Matt Smith broke the track speed record with his pass of 6.838 at 200.32.

“It’s pretty big for me,” said Stoffer. “It’s been a long time and even then, I’ve only done it one other time so it’s pretty huge. I think what was more impressive for me was that we did it with a 6.79. I’ve never run in the 70s so it was a record for me E.T.-wise and to also maintain that and get the green hat in the end of qualifying was pretty huge.” 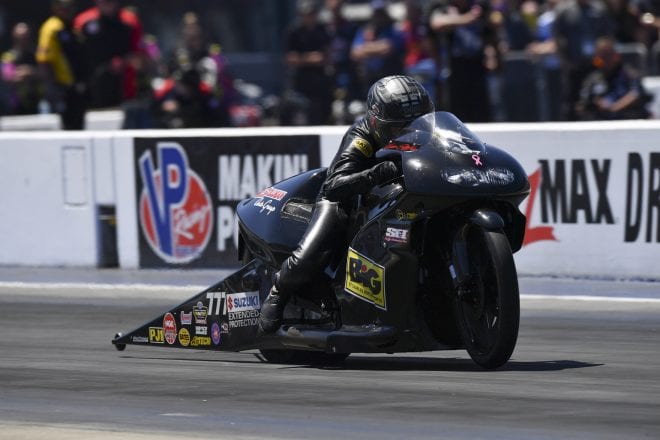 “I can’t believe we’ve qualified No. 1 for the second race in a row,” said Gonzalez. “The four-wide is so hard to predict but I’d place our bets on our team to come home with the Wally tomorrow.”