In the Top Fuel final round, Salinas’ run of 3.706-seconds at 333.58 mph in his 11,000-horsepower Valley Services/Scrappers Racing dragster outdistanced Josh Hart, as he also set the track speed record in the championship round. It continued Salinas’ remarkable season, sending him past Brittany Force for the points lead with his seventh career victory. Salinas reached the final round by knocking off Tony Schumacher, Doug Kalitta and Leah Pruett, posting a stellar reaction time in the final round against Hart as he won for the third time in the past five races. 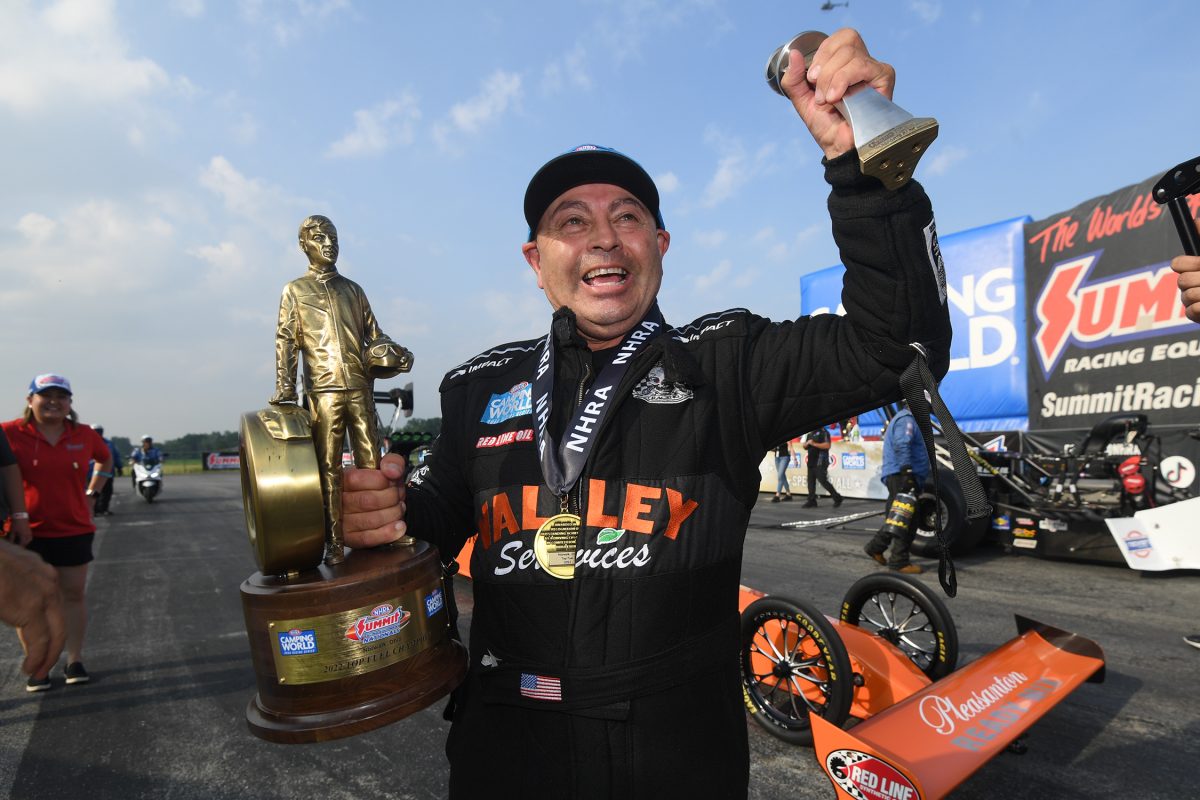 “It’s amazing,” Salinas said. “(Crew chief) Rob Flynn brought a calmness to this team, and everyone has a voice. I think that is unprecedented and that’s been pretty awesome. We’ve earned the right to be out here and race against these guys, and we belong here. It’s a good thing because we’ve got a great team and I’m learning how to drive. It’s been really cool for this entire team and a lot of fun, and I just really appreciate being here and being in this position.”

Hart reached his first final round of 2022 and third in his career by knocking off Spencer Massey, Austin Prock and Force, who now trails Salinas by just 12 points. 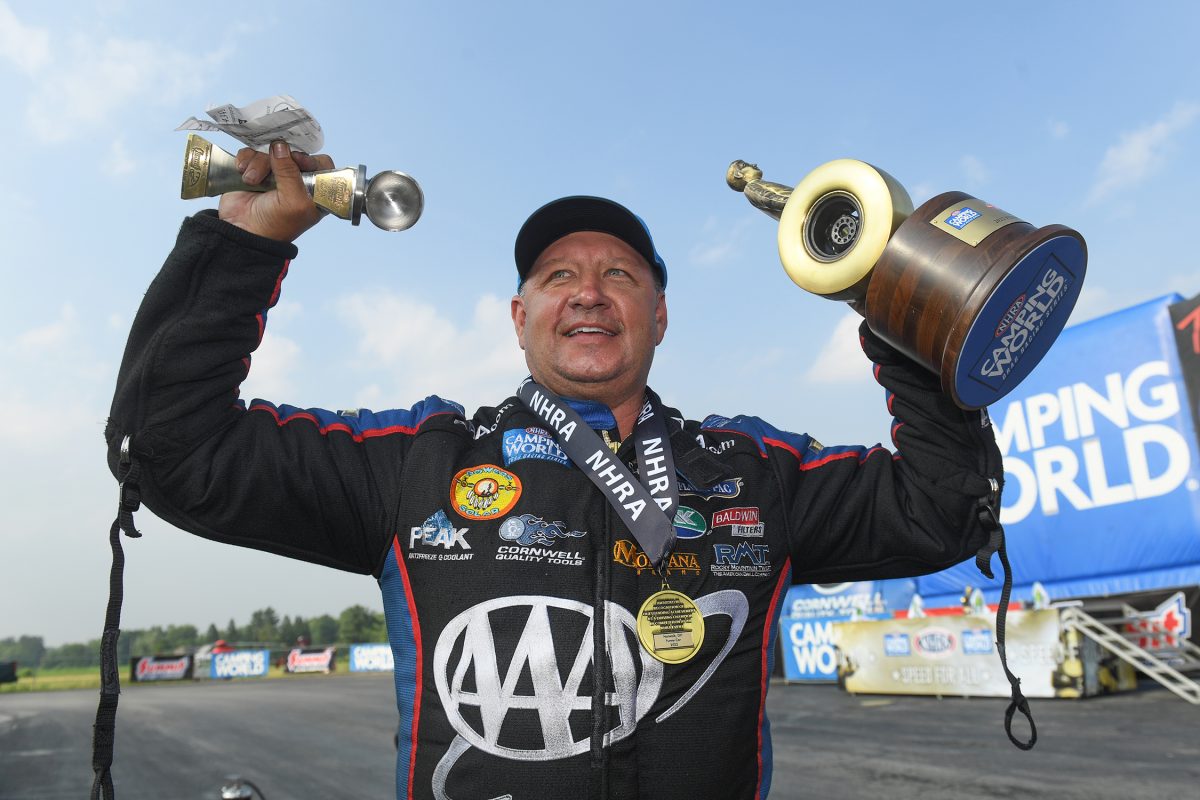 Salinas wasn’t the only nitro driver who took over the points lead on Sunday, as Hight did the same in Funny Car, rolling to his fourth win of the season as well with an impressive 3.944 at 327.51 in the finals in his 11,000-horsepower Auto Club Chevrolet Camaro SS against Bob Tasca III. It is Hight’s 57th career win and first at Summit Racing Equipment Motorsports Park, making a series of stellar runs during eliminations, including a 3.890 at 328.06 in the semifinals against J.R. Todd. Hight also took care of business against Jim Campbell and Alexis DeJoria to reach the final round, where he was able to hold off Tasca for a monumental victory.

“This is big for us,” Hight said. “I had never won here, so being able to cross this one off and get the points lead, it’s big. The conditions kind of came to us (on Sunday). When it gets a little cooler, you’re not going to beat (crew chief) Jimmy Prock. I’m so proud of this team, they’ve worked so hard. It shows we’re legit and we’re here to win. I’ve had so much fun this weekend and we’ve had a great time, and I’m not ready for it to end.”

Tasca reached the finals in Norwalk for the third straight time, picking up round wins against Mike McIntire Jr., Hagan and No. 1 qualifier and defending world champ Ron Capps. Hight leads Hagan by 21 points as the 2022 campaign nears the halfway mark. 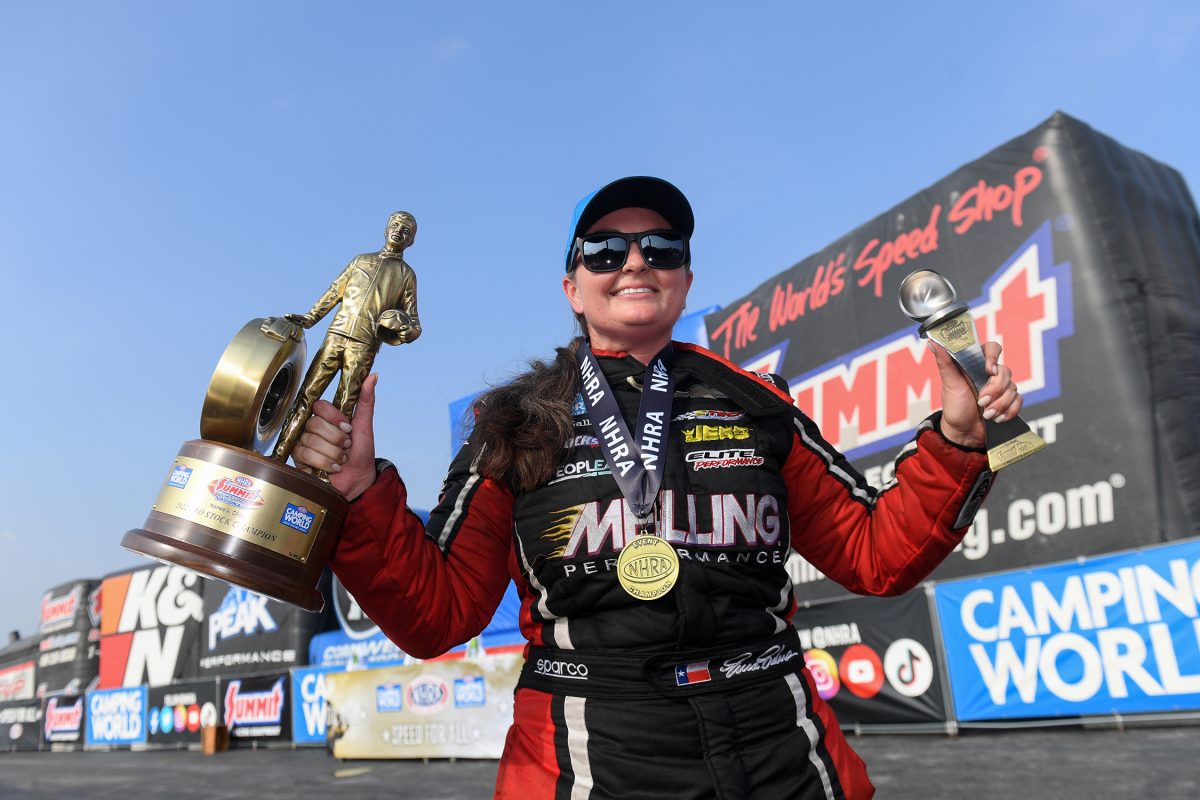 Enders’ incredible domination in Pro Stock during the 2022 season continued, as she won in Norwalk for the second straight year, beating Aaron Stanfield in the final round with a strong 6.627 at 207.88 in her Melling Performance/Elite Motorsports Chevrolet Camaro. In the third straight final round between the two teammates, Enders picked up her fourth win in the past five races, avenging last Sunday’s wild final against Stanfield in Bristol. This weekend, Enders was a step ahead of everyone throughout, qualifying No. 1 by a large margin and then making strong runs throughout eliminations, beating Fernando Cuadra Jr., Matt Hartford, and Deric Kramer to reach the championship round.

There, she was nearly perfect, posting a .018 reaction time before driving away from Stanfield in what has become a special year for the points leader and four-time world champ. Enders now has five wins in eight Pro Stock events in 2022, with Sunday’s victory her 38th overall.

“We started off on the right foot in Pomona, and after we exploded last weekend in Bristol, the guys rallied and put in a new bullet for this race,” Enders said. “It performed pretty flawlessly. It mowed down the scoreboard on Friday and we threw out some really great numbers on raceday. I’m really proud of my guys. To have a group believe in me like they do, it makes my job a whole heck of a lot easier. I have a group that believes in me and lifts me up, and I attribute all my success to that.”

Stanfield’s third straight final round kept him second in points and gave him five this season and 11 in his career. He got there on Sunday by taking down Troy Coughlin Jr., Mason McGaha, and Kyle Koretsky. Enders’ points lead is now 105 over Stanfield.

A week after going red in the final round, Sampey more than made up for it on Sunday in Norwalk in Pro Stock Motorcycle, knocking off Joey Gladstone in the championship round with a standout pass of 6.861 at 197.13 on her Vance & Hines/Mission Foods Suzuki. It gave Sampey, a three-time world champ, her first victory of the season and 46th in her career. She reached the finals with round wins against Ron Tornow, defending world champ Matt Smith and Jerry Savoie, who picked up the win against Sampey last Sunday. But this weekend belonged to Sampey, and she led wire-to-wire against Gladstone to come through with a much-needed victory, which is her first at Summit Racing Equipment Motorsports Park.

“You don’t know the internal battle that I was going through since last week,” Sampey said. “This was huge after the final in Bristol. I threw it away. I gave it to Jerry. It slipped through fingers and on Monday I prepared for this race. By Friday, I dug deep within myself. Twenty years ago, I wouldn’t have had to do what I did mentally, but I’ve found that the biggest competitor these days is myself.”

Looking for his first career win, Gladstone came up just short, but still managed a strong weekend, knocking off Jimmy Underdahl, Karen Stoffer and Hector Arana Jr. in his first final this season and third in his career. Steve Johnson maintained his points lead, but it closed to just 52 over Sampey.

The NHRA Camping World Drag Racing Series returns to action July 15-17 with the Dodge Power Brokers NHRA Mile-High Nationals at Bandimere Speedway in Denver. It is also the start of the famed three-race Western Swing.