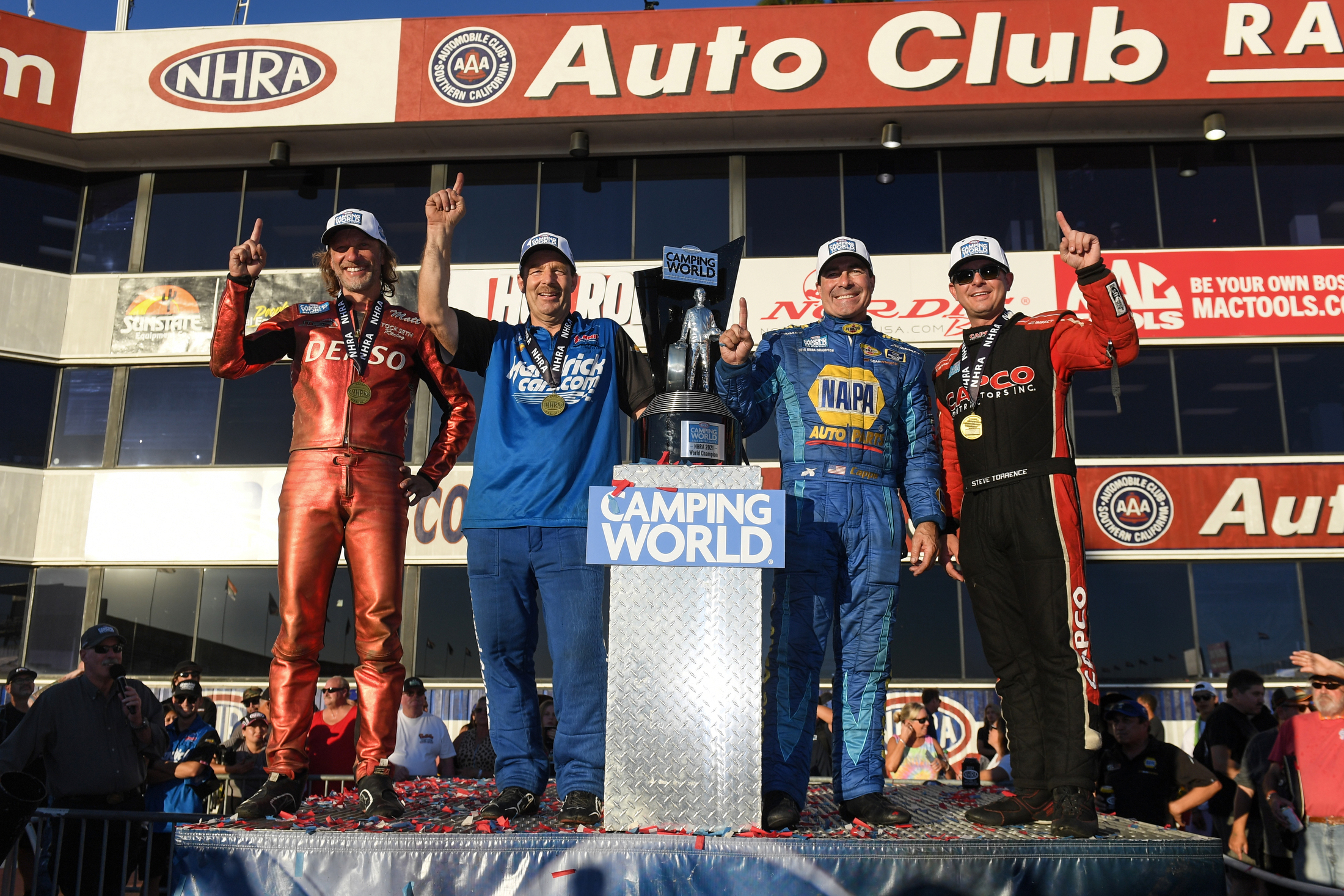 Steve Torrence, Greg Anderson and Matt Smith all wrapped up their championship seasons in impressive fashion, racing to a world title and the event victory on Sunday at the season finale, the Auto Club NHRA Finals at Auto Club Raceway at Pomona.

Bob Tasca III (Funny Car) also picked up a win at the final race of the Countdown to the Championship and the 2021 NHRA Camping World Drag Racing Series season.

Torrence continued his incredible reign of dominance and secured the world title for a fourth consecutive year with a win in the first round in his 11,000-horsepower Capco Contractors dragster. He wasn’t done there, either, and powered to the victory, going 3.759-seconds at 317.12 in the final round against Antron Brown. It capped off another dominant season, as he picked up his 11th victory of the season and 51st in his career. 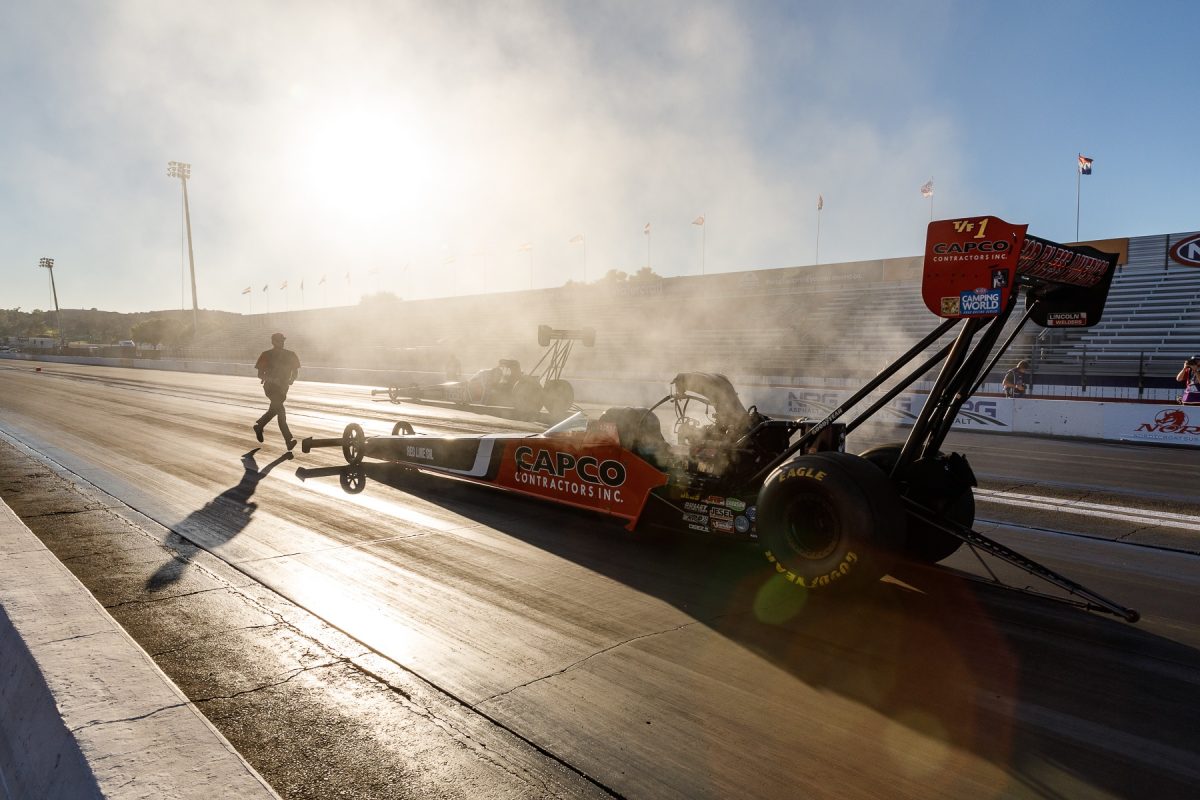 “I just have all the confidence in the world in that race car,” Torrence said. “I don’t know how we’ve accomplished what we have other than hard work and great support, but this is what all the guys on this team have dedicated their lives to. At the level we’re at, it takes a team that’s willing to go the extra mile. When you have people where winning is the only option, you’re willing to go the extra mile and that’s what these guys do.”

Brown reached the final round for the second time this year and 125th time in his career by beating Justin Ashley, Billy Torrence and Tripp Tatum. Torrence advanced to his 76th career final round thanks to round wins against Brandon Welch, Doug Kalitta and Cameron Ferre, and then wrapped off a truly memorable 2021 season by chasing down Brown in the finals. 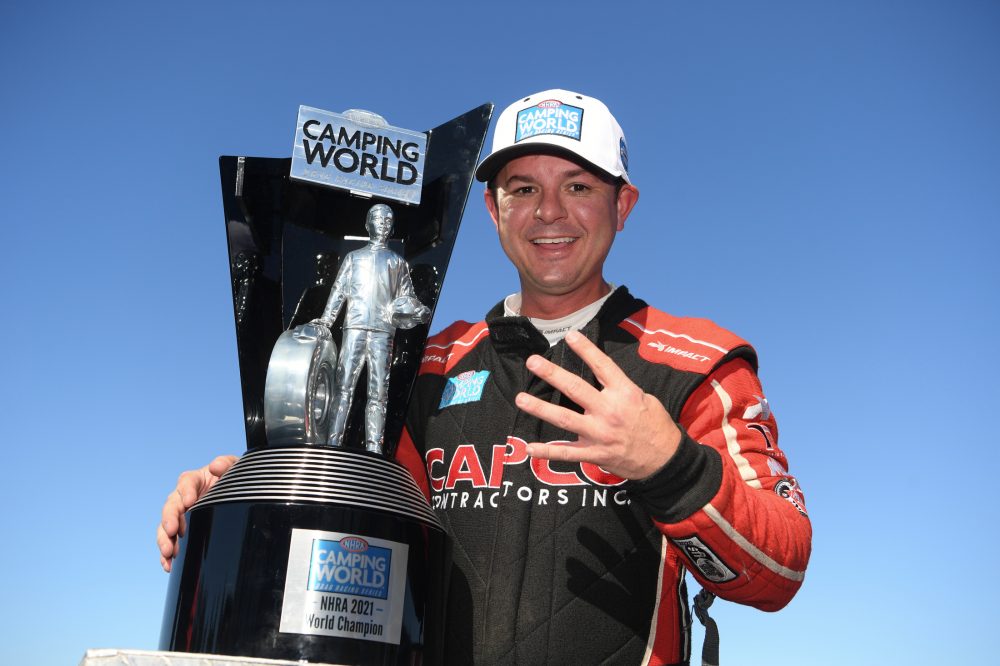 “Over the last four years I’ve been able to be in a lot of high-pressure situations and it prepares you,” Torrence said. “It trains you and conditions you to be a machine in those situations. I’m telling myself to do what you do and (my team) has my back. In the finals, I went up and did my job and the outcome fell our way. We’ve got a target on our back and each year it gets bigger, so we’ve got to continue to up our game.”

Capps won his second world title when defending world champ Matt Hagan lost in the semifinals. The Funny Car veteran won his first title in 2016 and was helped by a first round win against Terry Haddock on Sunday in his 11,000-horsepower NAPA Auto Parts Dodge Charger SRT Hellcat. Capps’ championship season included a pair of victories and five final round appearances, advancing to the championship round in two of the previous three races to take command in the points race against his Don Schumacher Racing teammate. Capps lauded the competition in the class in 2021, relying on a team that gave him a strong car in crunch time. 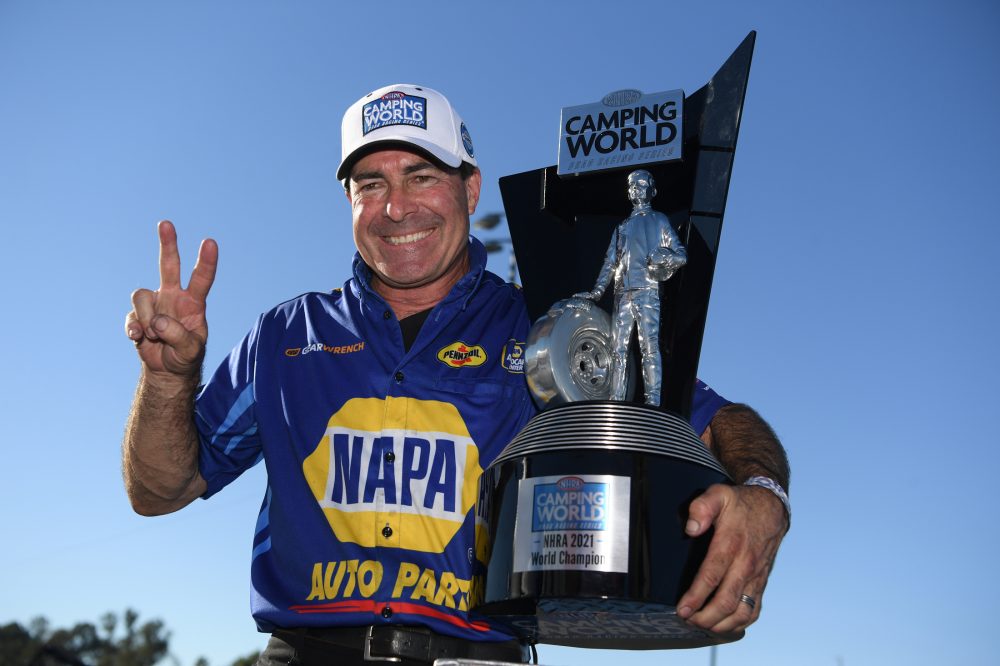 “I figured there was no way this was going to be easy,” Capps said. “It’s been so fun to work with these guys and this team, and to win another championship, you couldn’t have scripted it any better. I’m just so happy to be able to work with these guys. I always approach it like I’m trying to win another championship and Funny Car is just so tough. I’ve just had to chug along with a lot of great people around me and just do our thing. To have a second championship, it validates it all a little bit more.” 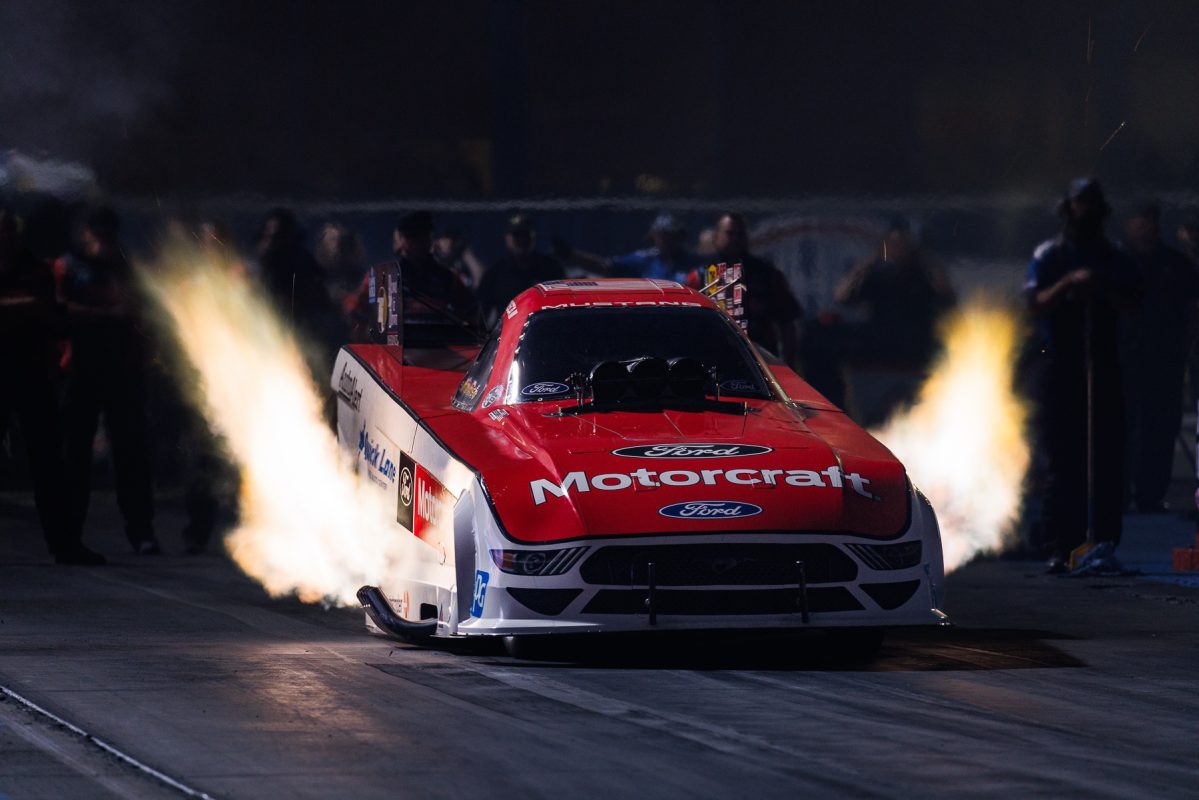 Tasca led the points for eight straight races in the early portion of the season and while he wasn’t in the title mix at the end of the year, he finished on a huge strong note, going 3.955 at 321.65 in his 11,000-horsepower Mustang to defeat Alexis DeJoria’s 3.974. It is Tasca’s third win this season and ninth in his career and it came after knocking off J.R. Todd, Jim Campbell and John Force to reach the final round. DeJoria advanced to her third final round this season thanks to wins against Bobby Bode, Tim Wilkerson and Hagan, but Tasca led wire-to-wire in the finals and finished a career-best third in points.

“I’ve been chasing a Pomona Wally for a long time,” Tasca said. “I remember being out here as a kid with my dad and I’ve always wanted to win here. It’s just a special day for my family, for sure. I just knew we were going to have a great weekend and we’ve got a great team. Everyone’s coming back next year and it was a fun way to end the year.” 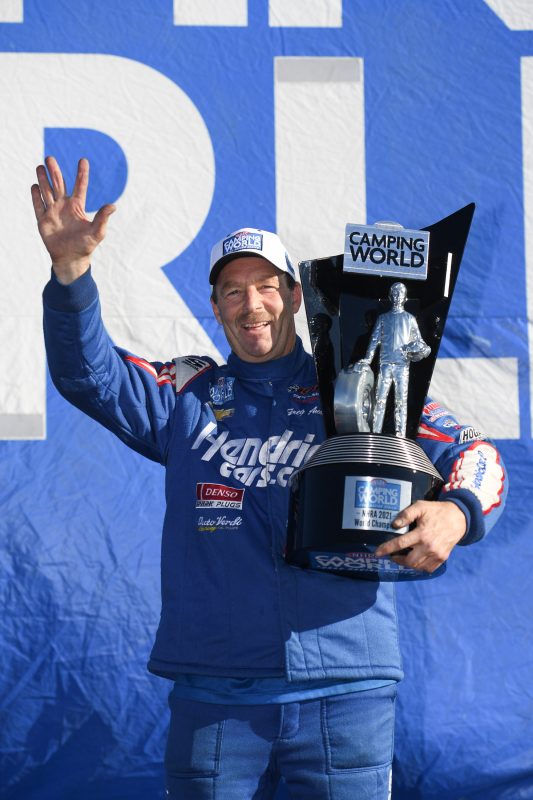 An absolute dream season for Anderson ended with a fifth world championship in his HendrickCars.com Chevrolet Camaro when he slipped past defending world champ Erica Enders in the semifinals. The all-time wins leader in Pro Stock history then rolled to his 99th career win, going 6.574 at 208.23 in the final round, defeating KB Racing teammate Kyle Koretsky on a holeshot.

“That is the meanest race car in all the years I’ve raced,” Anderson said. “It was fast right off the trailer and it never skipped a beat. I’m very proud of everyone on the race team this weekend and we definitely came prepared to race. I love the competition in the class and we had a great, great day. I really believe I had the best race car all year and we got it done. It was a pretty neat day.”

Koretsky reached the final round for the fourth time this year after beating Troy Coughlin Jr., Aaron Stanfield and rookie Dallas Glenn. But there was no stopping Anderson in 2021, as he beat Mike Callahan, Deric Kramer and then Enders in a thriller to advance to the final. In a year where he became the all-time wins leader in the class and also qualified No. 1 at 12 different races, Anderson finished it off with his fifth win this season. 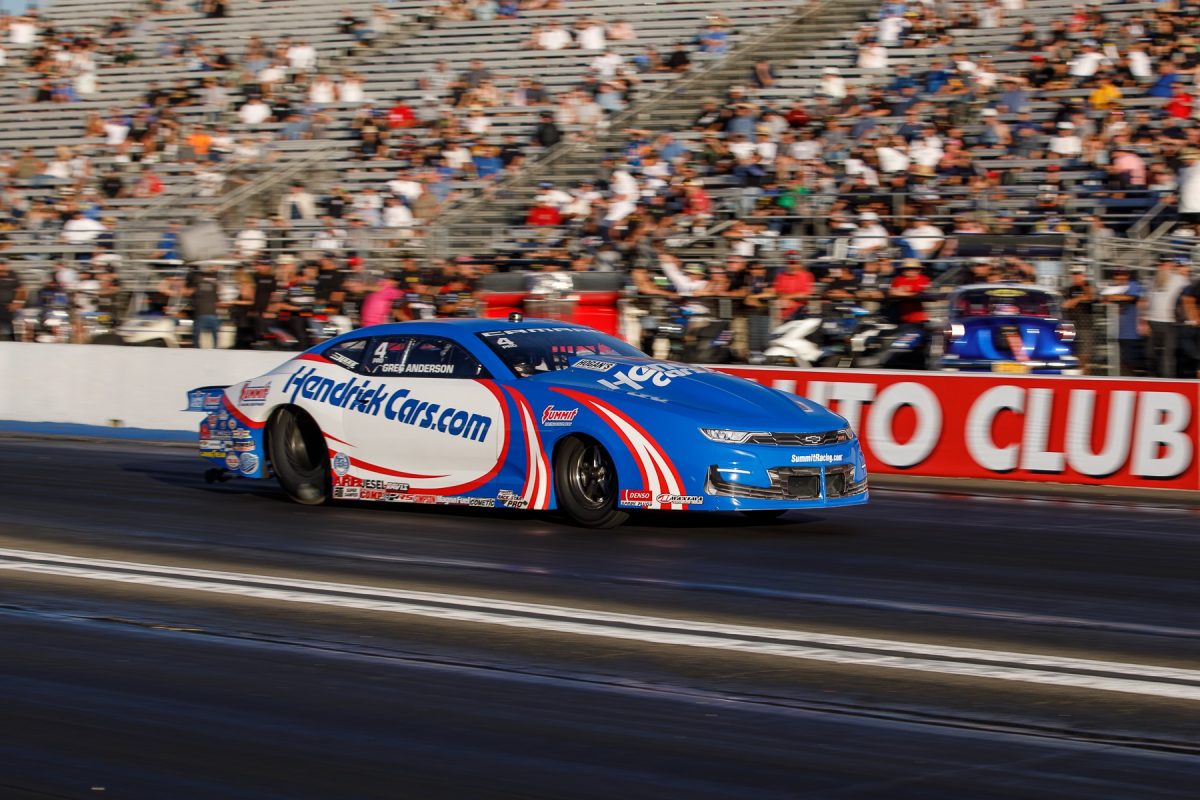 “In the final round, all the pressure and tension was off,” Anderson said. “It was fun. There’s a lot of pressure in these races. To finish the season and get a 99th win, we can’t quit now. We’ve got to keep digging and I still feel like I can win races and win championships. I’m having a ball and I think I had more fun racing this year than a lot of years.” 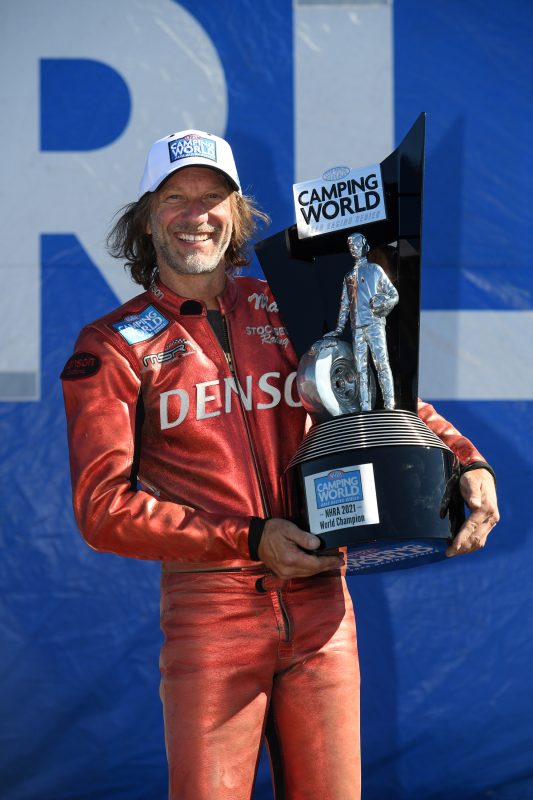 Smith wrapped up his second straight world championship and fifth overall by winning in the second round on his Denso Auto Parts/Stockseth/Matt Smith Racing EBR against three-time world champion Angelle Sampey. Smith was first off the starting line in the pivotal matchup to pull off the holeshot victory and replicated that in the final round, going 6.817 at 200.74 to beat Karen Stoffer on a holeshot. That gave Smith six victories during his championship season.

“The goal was to at least get three round wins today,” Smith said. “When we beat Angelle and Steve (Johnson) lost right in front of us, I knew we were champs. Everything worked out for the best. I knew we were going to have a tough race with Karen, but I hit the Tree as hard as I could and had the best light of the weekend for me. We just made it work and performed well on the starting line.”

Stoffer, who also qualified No. 1 and made her first career 200-mph run this weekend, advanced to her third straight final to close the year, knocking off Kelly Clontz and Scotty Pollacheck. Smith, though, was brilliant the entire season, knocking off Ryan Oehler, Sampey and Eddie Krawiec on Sunday to reach the final round en route to his 32nd career win.