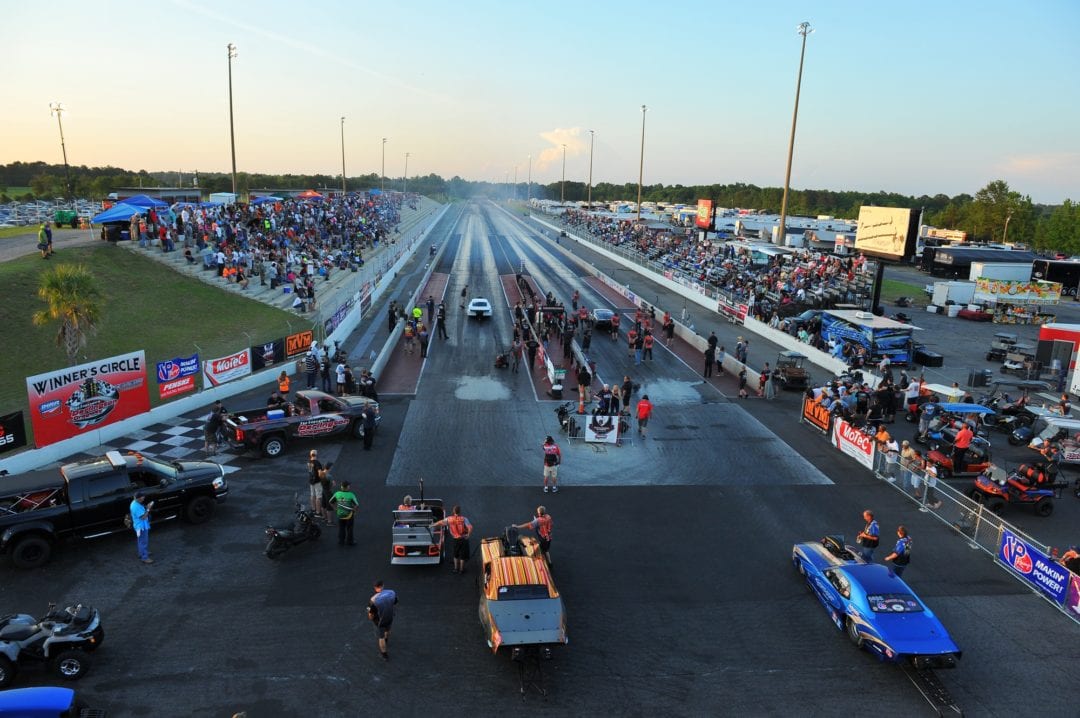 Drag racing is back – albeit in a highly controlled, single-car manner – but just having that possibility brings a smile to Russell Miller’s face.

The Darlington Dragway owner worked with the local police department and then received official permission from the South Carolina Department of Commerce on Monday to begin holding test sessions at the track under strict guidelines.

Social distancing, temperature-taking, no spectators on the premises and sheriff deputies on hand to make sure all guidelines are being followed is part of the process, but Miller was proactive in setting those standards. By providing a highly-stringent plan to officials last weekend, Russell and company were granted approval within 48 hours.

The first private test session takes place Thursday through Saturday at the track, and Miller is expecting in the range of 30-40 cars. He’ll have his core staff on hand, plus at least one sheriff deputy, and only one car on the track at a time. Each pit space will also be marked off to put plenty of space between teams, with Miller trying to take every precaution to make this a success.

“We’re going to try it and evaluate it,” Miller said. “We put a good plan together, but it’s not going to be perfect. We may find we have to restrict how many cars we can have and we may have to make adjustments.

“But we have to make this work. When these three days are done, I can promise you there’s going to be a report card.”

DRAG ILLUSTRATED spoke with Miller about the process, the strict guidelines in place and the reaction he’s received from racers.

DRAG ILLUSTRATED: What led you on this path to get these conversations started?

RUSSELL MILLER: What I was noticing was you had so many drag strips where this is their only income. In the neighborhood I live in, there’s a golf course a few blocks away. I went down there and looked and, sure enough, the place was packed with golfers and I thought that didn’t seem fair. You feel this way for selfish reasons, first and foremost. I understand that we can’t have events.

We don’t want to people in harm’s way, but under the guidelines, I feel like test sessions would give tracks an opportunity to run and generate revenue, along with giving racers the opportunity to have some needed testing for their race programs. We went over our governor’s guidelines and we said if we could build guidelines that could pass inside a building, surely being an open-air, outdoor venue we would be able to have these test sessions, getting the racers out doing what they needed to do and having the tracks generate some kind of income.

DI: Can you take us through the guidelines that will be in place for these test sessions?

MILLER: We will check temperatures when everyone comes in so nobody goes through the gates with a fever, and each team will be limited to five people (one driver, four crew members). You can have five people in a 1,000 square-foot area, and we’ll can mark that off. So we can still have multiple teams testing, so long as we mandate that they keep a six-foot distance between the people.

Then, we’re only going to let one car to the starting line at a time to prevent that grouping. We’re going to have so many feet per car in the staging lanes – keep at least 10 feet between cars. We came up with those guidelines and I was able to go onto the South Carolina Department of Commerce and they had a form you can fill out to see if you’re essential or non-essential.

We know we’re not an essential business. We’re not trying to fool anybody, and we’re not saying we are. But what we are saying is we can follow these guidelines and maintain the safety aspect of it, and we could be open for business – which is essential, at least to us.

I put in all those guidelines and my request was to have a very restricted test session with zero spectators. I added that I can and will use the local deputies to enforce it. I’ll have a deputy on-site and make sure people are following the rules.

DI: The approval process was pretty quick, which obviously had to be a good feeling. What was your next move from there?

MILLER: When I found that out, I immediately got in touch with Carolina Dragway because I knew they wanted to test. Then, I contacted Union Dragway and ran them through it, and they got (approval), too, as well as Pageland (Dragway) and they were approved. We were able to take a bad situation as drag strips and at least do something. At least for right now, we can test, which is something.

DI: The test session is Thursday through Saturday and you said you’re expecting 30-40 cars. Do you feel good about that kind of number being manageable as far as the guidelines in place?

MILLER: I think the 30-40 car deal is a good number, yes. When they hit the gate, it’s going to be official from the word go. They’re going to be as far away as they need to be from the next pit. The deputy is going to be hands-on and it’s going to be, ‘this is your parking area.’ We have a memorandum that basically says, ‘You agree to follow these rules. Don’t screw this up for everybody.’ We are taking very seriously.

DI: You’ve surely had a great reaction from racers. How excited are you to have a chance to provide an opportunity for racers, however limited it may be?

DI: Do you expect any blowback or criticism?

MILLER: What I would hope to see happen is these tracks continue to get open in a safe manner and be able to serve customers that need testing and also generate some revenue to keep the doors open. We needs tracks open, we need racers racing.

DI: What was the reaction you’ve heard from the racers coming to the track this weekend?

MILLER: They’re loading up and coming and they’re happy because they get to race in some form. I’ve had people call me and say, ‘Listen, can I pay $350 just to come watch?’ But they can’t. There’s zero spectators. But it makes you feel good that people miss drag racing. They want to be at the track.