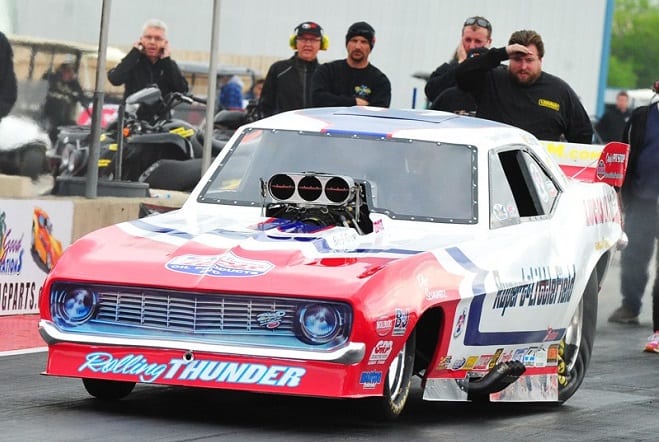 Rupert, the No. 3 qualifier, was consistently strong in eliminations. He defeated Bruce Litton and Mike McIntire before defeating Orlando winner Shawn Bowen in the AMSOIL Nitro Funny Car final round.

“It feels great (to win this race); the thing (car) responded,” Rupert said. “We put a new blower on it, and I had to chase the tune-up on it all day. We hurt a bunch of pistons the first run, but as time went on, I was able to figure that out and step up a little bit each run. It’s always good when you can do that. We did really good at the last race but shook the tires in the semis and fell behind so we needed to make up some ground right here so it was good. The competition out here is tough, and these guys are getting tougher, too. You try to stay ahead, but then all of a sudden, there’s a bunch of guys that come up with some stuff so you’re chasing them. It’s always tough.”

For the second time in as many races this season, Konigshofer reached the IHRA Pro Stock final round. He came up short in Orlando, Florida but made the most of his San Antonio opportunity with a hole-shot win over Team Aruba Racing’s Trevor Eman. Konigshofer defeated Larry O’Brien and John DeFlorian on his way to the final round.

“It was an awesome day for us; the car is strong,” Konigshofer said. “Jon Kaase gave us some awesome motors. We ran 6.22 (seconds) with a five this morning in real good conditions. I thought we could maybe grab the record tonight, but it wasn’t there. We’re really happy with the car; everyone’s doing their jobs, the brothers are doing their jobs so it’s working.”

Harper saved his best performance of the weekend for the most important time – the Pro Mod final round. His 5.842-second elapsed time set the IHRA Pro Mod record, and it was the second time in as many races that Harper set the IHRA mark. He defeated Jerico Balduf and Bill Lutz before besting Ruben Tetsoshvili on his way to his first winner’s circle celebration of the season.

“It always feels great to win, but I could never do it without this crew,” Harper said. “They’ve done a great job. We had a lot of bugs this weekend, but they got through it and brought home a national record and a win. The car’s coming around; we made a lot of changes in the winter, and we’re excited about how the car’s running. We’re having a ball here at the IHRA.”

The Nitro Motorcycle final round was a battle between the seventh and eighth qualifiers. Turner, a four-time IHRA Nitro Motorcycle World Champion, was the No. 7 qualifier; he upset No. 2 qualifier Tii Tharpe, and outran Randal Andras in the semifinals. In the final round, Turner defeated Rickey House to take home the Ironman. His Good Vibrations Texas Nationals victory is his first of the season.

“It was a long day, but it worked out,” Turner said. “We struggled and spun the tire in qualifying on the first pass. We broke some stuff in the transmission that takes a while to fix; it’s such a small unit. We missed the second round of qualifying, but we were still confident going into the race. It (stunk) we ended up having to run all of our teammates, but it is what it is. It was three good races. The transmission issue didn’t fix itself completely; we just crushed through it. It kind of gave up a little in the final. It was still a good race, and we put on a good show for the fans with side-by-side passes. It feels good to get a win for the 2016 season.”