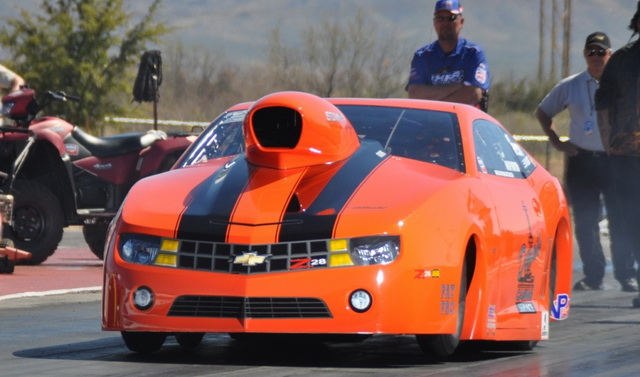 It was classic IHRA action at the 2014 season-opening Southwestern Nationals presented by Good Vibrations Motorsports in Tucson, Arizona, as a new championship program and new classes led to an increased sense of urgency and, in-turn, some incredible action on the track. 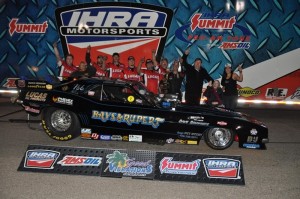 “This win really means a lot to me. We have won three championships and a ton of races and to win this race, the first with the new IHRA deal, is pretty prestigious to me,” Rupert said. “We have some of the best people and some of the best cars in the country in this category here this weekend and to win against that lineup is just an awesome deal.”

With the exception of a small hiccup in the opening round, Rupert was nearly unbeatable in the “Bays and Rupert” Camaro. Rupert kept his ride in the five-second range throughout the weekend, saving his best stuff for last. With the inaugural Ironman on the line in the newly restructured Nitro Funny Car class, Rupert went right down Broadway in the final against “Mr. Explosive” Mark Sanders with a 5.853 elapsed time at over 247 miles per hour in the “Bays and Rupert” Camaro, while Sanders had to click it off early.

“We have worked for years to reach this point, to be recognized as a premier class in these cars,” Rupert said. “In front of this great crowd, to come out and take the win was amazing. I want to thank my awesome crew, my sponsors, all which help me do what I do. It was a great start to the 2014 season.” 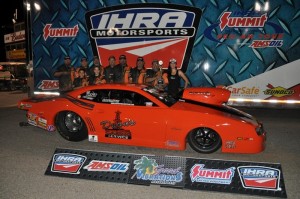 Mountain Motor Pro Stock highlighted IHRA’s other major attraction over the weekend as the powerful cars returned to the IHRA quarter-mile for the first time in four years. Cary Goforth, from Holdenville, Okla., took the win in an all-Goforth Racing final against teammate Todd Hoerner.

Filling in for regular driver Dean Goforth, Hoerner and Goforth topped the qualifying charts and proved the class of the field throughout the weekend. However the celebration was cut short in the final as Hoerner got out of the groove and leapt across the track, smacking the wall in handing the win to Goforth, who ran 6.382 at 219.12 in the final.

“Well, this is all a little bittersweet for us tonight. It is a great moment, it obviously means a lot to us to have both cars in the finals, but we obviously had a few issues that puts a little bit of a damper on the situation,” Goforth said. “Overall, though, it was a great weekend. We were the top two qualifiers and we were the cars to beat. It was a great team effort for the entire crew to get us here tonight.”

Goforth qualified second in the seven-car field, just a few tenths behind teammate Hoerner. He also had little trouble in his path to the final, besting Brad Waddle and Pete Berner with bracket-like numbers of 6.411, 6.376 and 6.383. His run in the final kept him ahead of Hoerner who put the brand new 2013 Dean’s Casing Camaro into the wall.

While the final provided plenty of excitement, the return of the IHRA original class was the real buzz as class returns to fulltime IHRA competition in 2014. 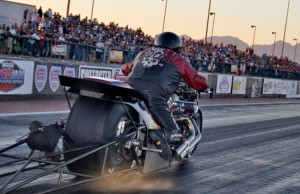 “We are just so glad to be back and I sure appreciate everyone involved in making this happen,” Goforth said. “We have had a pretty successful run elsewhere the last three years, but it just wasn’t where we want to be. We are so glad to be back with the IHRA and we look forward to a great season. We certainly couldn’t have asked for a better start.”

Mike Scott dominated the Nitro Harley class with an incredible sequence of runs unheard in the class known for its unpredictable passes. Scott had laps of 6.351, 6.361 and 6.387 on his way to picking up the Ironman in another class restructured for the 2014 season.

Scott never let up on his grip of the field, topping the charts on Friday before eliminating Steve Heidner, Ron Gledhill and class-favorite Jay Turner. In the final Scott had another tremendous 6.387, 224.47, while Turner had to shut it off early nearly halftrack.

Wrapping up the nitro categories was Nitro Altered as Arizona resident Mike Hilsabeck in the “Arizona Thunder” took the win over Jim Maroney. 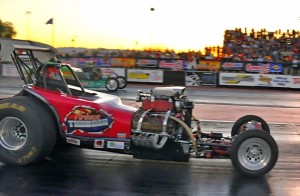 The class faced a particularly large amount of carnage over the two-day race weekend with a few smacks of the wall and a couple of timing blocks destroyed. But at the end of the day it was Hilsabeck left standing, besting Maroney in the final with a 6.966, 169.49 pass to Maroney’s 7.968, 122.20.

In the final competitive class of the weekend Marisha Falk drove her Embry-Riddle jet dragster to a win over team owner Elaine Larsen in the inaugural Jet Dragster competition.

Next up for the IHRA Nitro Jam Drag Racing Series North American Tour is a trip to San Antonio Raceway for the San Antonio Nationals March 28-29 and watch for the series on MAV TV coming this fall.