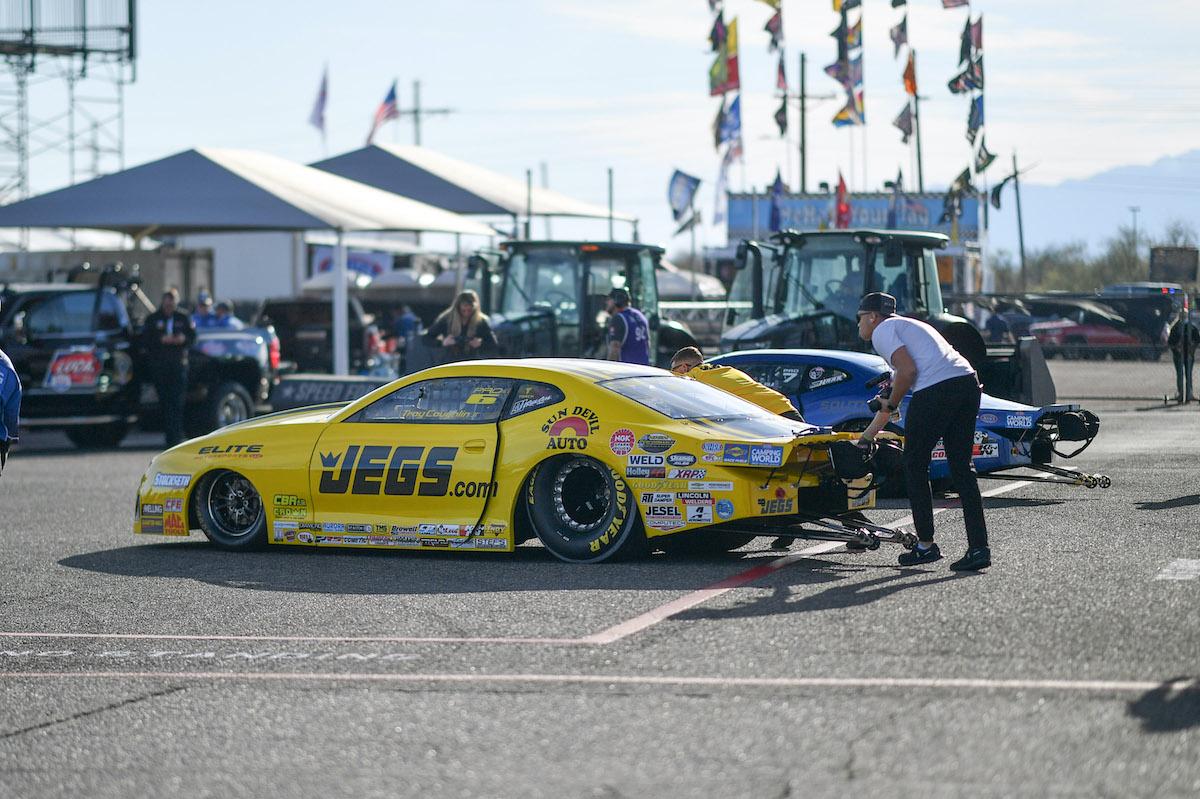 Troy Coughlin Jr. drag raced like a seasoned veteran Sunday at Wild Horse Motorsports Park, beating three championship rivals — two via holeshots starts — en route to his first runner-up finish of the season. Only his teammate Aaron Stanfield could stop him, using identical horsepower from Elite Motorsports to eke out a .01-second victory at the NHRA Arizona Nationals.
Reaching a Pro Stock final for the third time in his short two-year career was impressive, especially considering Coughlin was outside the 16-car field before making his third-and-final qualifying pass. That run of 6.535 seconds at 210.50 mph made all the difference as it pushed his JEGS.com Elite Motorsports Chevrolet Camaro all the way up to the fourth spot on the elimination ladder, setting the table for a big day.
“That was a big turning point right there,” Coughlin said of his final time trial run. “We had some electrical gremlins with the EFI stuff that had been haunting us but the guys were relentless in chasing it down and fixing the car. They made the right choices when they had to with some pretty extreme pressure on them. I’m so proud of this group.
“We were the 16th qualifier going into the third round of qualifying and then we got bumped out when I was sitting in the water box. It was really intense but I have tremendous trust in this team and they delivered, just like they always do. Mark Ingersoll, Kyle Bates, Ricky Calloway, and Kelly Murphy are world-beaters.”
Coughlin took advantage of his change in fortune on race day, opening with a convincing victory over Matt Hartford. His 6.525 at 210.97 mph was more than enough to eliminate Hartford’s 6.564 at 208.55 mph.
Up next was Deric Kramer, who Coughlin dispatched with his first of two back-to-back holeshot wins. By leaving .035 seconds ahead of Kramer, Coughlin had more than enough to win with a 6.558 at 210.01 mph to Kramer’s 6.557 at 209.26 mph.
Unfortunately, Coughlin’s motor was hurt enough in the race against Kramer that a full engine swap was required. Once again, his Elite team rose to the occasion, getting the job done in plenty of time for the semifinal race with top qualifier Kyle Koretsky.
“Everyone jumped in to help, even Erica (Enders, teammate and four-time world champion) and her entire crew, who had just lost their second-round race,” Coughlin said. “That’s when you know you’re a part of something big. This Elite family is like none other. Thank you so much to all of them for jumping in to get the job done.”
Flying high from the excitement in the pit, Coughlin pulled off another mammoth holeshot of .035 seconds to help him hold off a hard-charging Koretsky, taking the upsetwin and a trip to the money round with a 6.575 at 210.18 mph to Koretsky’s 6.561 at 209.46 mph.
In the final, Stanfield just wouldn’t be denied, winning with a 6.526 at 210.50 mph to Coughlin’s 6.539 at 210.24 mph.
“We kept it in the family with Aaron winning so that was good,” Coughlin said. “They just welcomed a baby girl into their family so I’m sure he’s proud to take that trophy home. We’ll get one soon for this yellow and black team. I can feel it coming.”
Coughlin enjoyed support from Sun Devil Auto, a local group of service centers throughout the Phoenix area, during this event.