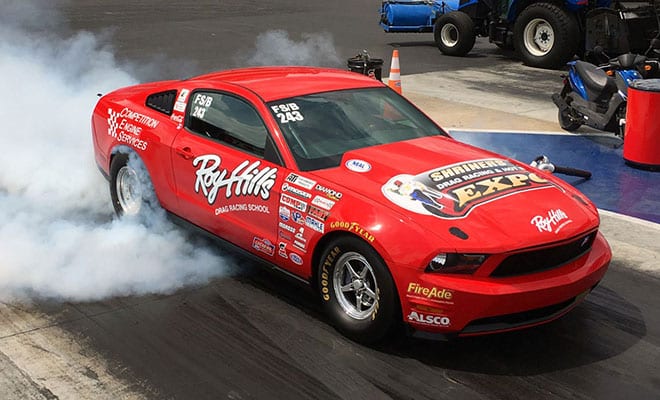 Never one to stray too far from the spotlight, Roy Hill is charging hard as he rounds out the 2016 season. The racing icon took some time off from racing his Ford Mustang Cobra Jet Super Stockers in order to regroup, as well as focus on his venerable drag racing school and driving experience events.

Before heading to Summit Motorsports Park in Norwalk, Ohio, for the 15th annual NMCA World Street Finals featuring the Cobra Jet Showdown, Hill took to zMAX Dragway just outside of Charlotte, North Carolina, for a test session. In addition to testing revamped equipment in his own Cobra Jet, Hill was helping an experienced racer earn his Super Stock license in the team’s second car. The racer just happens to have a wealth of experience on two wheels rather than four.

“We were pleased to have NHRA Pro Stock Motorcycle standout Chip Ellis licensing with us last week,” Hill said. “Chip will be racing Super Stock in addition to his usual Pro Stock Motorcycle duties at the upcoming NHRA Carolina Nationals. I’ve known Chip a long time, and he has helped out at some of my schools in the past. He’s a great racer and a talented engine builder at Lon Moyer’s Competition Engine Services, and one of their engines is in the car he’ll be driving.”

Ellis successfully earned his license and came away with a newfound respect for his peers that race on four wheels.

“That was a lot more challenging than I thought it would be, but both Roy and I were up for it,” Ellis admitted. “I’m used to doing everything with my hands on the bike, and to have to use your feet was foreign to me at first. It just goes to show that anyone can come to Roy’s school and learn, no matter what class or what you’re used to driving.

“I’ve never driven a race car other than a few runs in a Super Comp dragster, so this was fun and I’m really looking forward to coming back here in a couple weeks for the race,” Ellis continued. “Last year at the US Nationals I really got to know Roy when he helped me through some reaction time struggles and I ended up going to the final round so hopefully we can duplicate that success.”

At both the NMCA World Street Finals Cobra Jet Showdown last weekend and the NHRA Carolina Nationals, which will be held September 16-18, Hill’s car will feature backing from Goodyear and Ford Performance, while Ellis will be supported by Junior Pippin and Pippin Trucking. Both cars will also feature Competition Engine Services signage. Fast door car veteran Nate Pritchett scored a semi-final finish in a third Cobra Jet Super Stocker at Norwalk, and will compete again at Charlotte with support from the Shriners Drag Racing & Hot Rod Expo, a yearly event held in Greensboro, North Carolina.

In addition, longtime Roy Hill’s Drag Racing School and Roy Hill Racing sponsor Alsco has stepped up its involvement for the second half of 2016. The worldwide textile rental company backed all three Cobra Jets in Norwalk and will do so again in Charlotte.

“It’s always exciting to put something together with Roy Hill,” said Jim Divers, director of Sales and Marketing at Alsco. “You get the excitement and fun of being with Roy and his crew, and we’re looking forward to bringing our local customers to the Carolina Nationals for a great day at the drag races.”

Sandwiched between the NMCA World Street Finals and the NHRA Carolina Nationals, Hill kicks off a busy September with a visit to northeastern part of the country.

“Roy Hill’s Drag Racing School sessions at zMAX Dragway will prevent us from attending this year’s US Nationals in Indianapolis,” Hill said. “Instead, we’ll be at New England Dragway in Epping, New Hampshire, on Saturday, September 10 for the 50th anniversary of Funny Cars Under the Stars. This should be a great event! I’ll be match racing Cobra Jets with my old friend Carl Tasca Sr., and I just can’t say enough about the Tasca family and what they’ve meant to me and to this sport. We’re really looking forward to this one.”

Hill returns to the familiar confines of Rockingham Dragway in Rockingham, North Carolina on October 21-22 for a recently-scheduled Roy Hill’s Drag Racing School event. The session is open to all classes and drivers for licensing and testing.