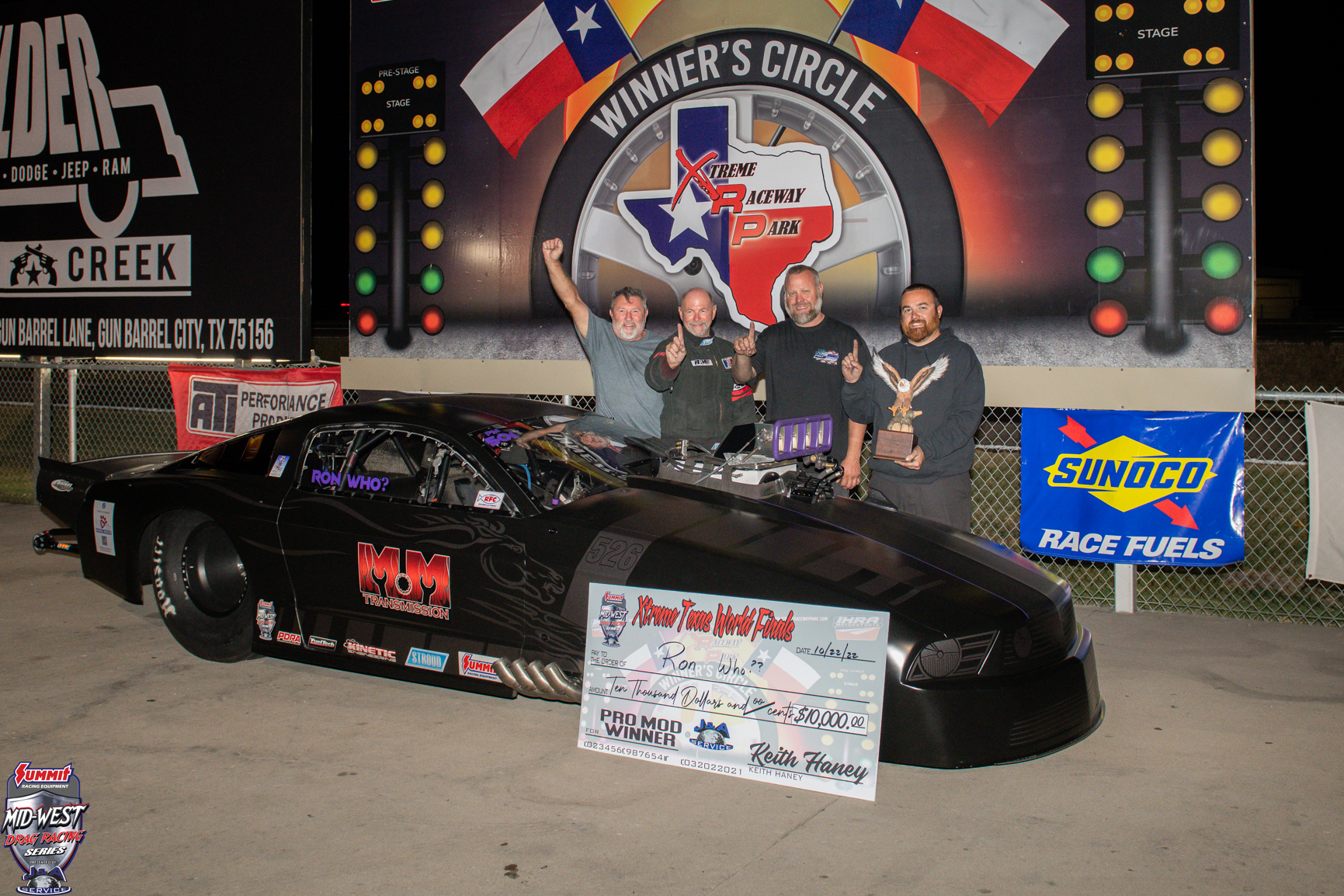 Pro Mod driver Tony “Sandman” Williams was awarded the Aryan Rochon Hardest Working Crew award. Major rig issues left Williams stranded on the side of the road on his way to the race. He was able to get his rig fixed and made it to the track just in time for the second qualifying session, where he made a solid 3.72-second run.

After many years of campaigning a nitrous-assisted ’68 Camaro known as the “Purple Gorilla,” Ron Muenks and car owner Dave Pierce decided to debut a screw-blown Mustang just weeks before the Xtreme Texas World Finals. That move paid off Saturday night when Muenks and tuner Jeff Pierce took the Mustang to the winner’s circle following a final-round battle with past series champion Keith Haney. Haney was first off the starting line, but Muenks threw down a 3.618 at 208.62 to drive around Haney and his 3.676 at 204.36 in his nitrous-fed “Black Mamba” Camaro.

“Hat’s off to Jeff, Dave, Ryan [Sadler] and Jeff Holloway,” Muenks said. “Those guys work their butts off. We worked like clockwork this weekend. Sometimes you have little bumps and things that go on, but this weekend, just like in 2020 when we won the championship, everything worked like clockwork. Everything just worked out perfect this weekend. The track was awesome, the track prep was awesome, the track facility, the employees, the staff at MWDRS was great, and the crew, you can’t say anything more about them. They’re the best.”

After qualifying third, Muenks set low E.T. of all four rounds of eliminations, starting with a 3.693 at 205.20 to knock out Robert Costa in the first round. He dipped further into the 3.60s in the next two rounds, using a 3.635 at 207.18 to beat Mike Labbate’s 3.796 and a 3.632 at 206.80 to beat Brian Lewis. Lewis reached the semis after running a career-best 3.696 in the second round, though he had to change engines with the help of crew members from eight different teams to prepare for the semis.

“Jeff had a pretty good baseline from testing on Thursday – I think we popped off a 3.65 at 206,” Muenks said. “From there, we sat out to get ready for first round of qualifying. Jeff kept tuning on the thing and making it go faster and faster every round.” 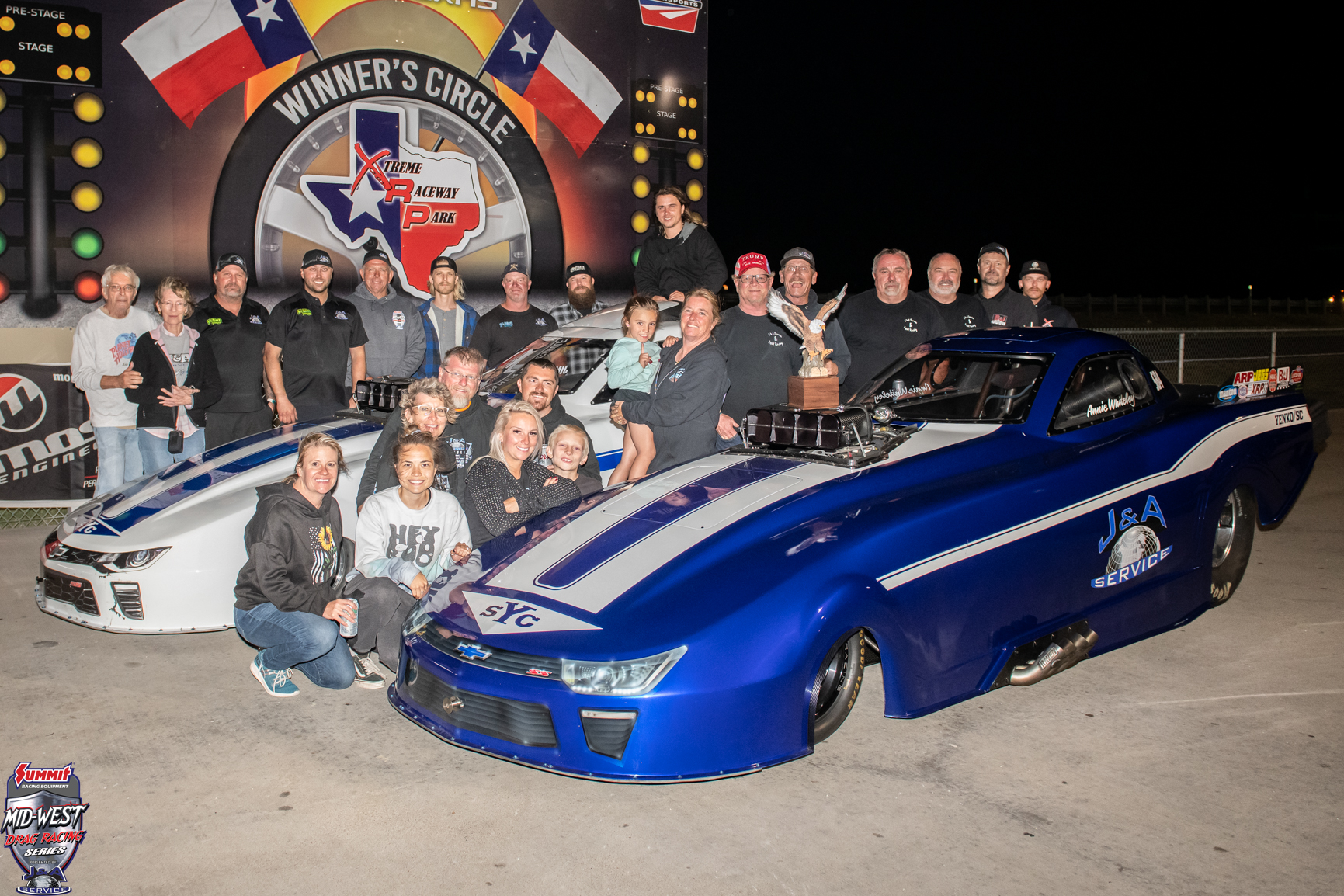 With three NHRA Top Alcohol Dragster world championships and success in both quarter-mile and eighth-mile Pro Modified competition, Jim Whiteley has a lengthy racing résumé. Now he can add a MWDRS Top Alcohol Funny Car win to that list, as he defeated his wife and teammate, Annie Whiteley, in the final round at XRP. Jim recorded a 3.685 at 209.79 in his white J&A Service Camaro, while Annie had to lift to a 7.624 at 58.90 in her blue J&A Service Camaro. 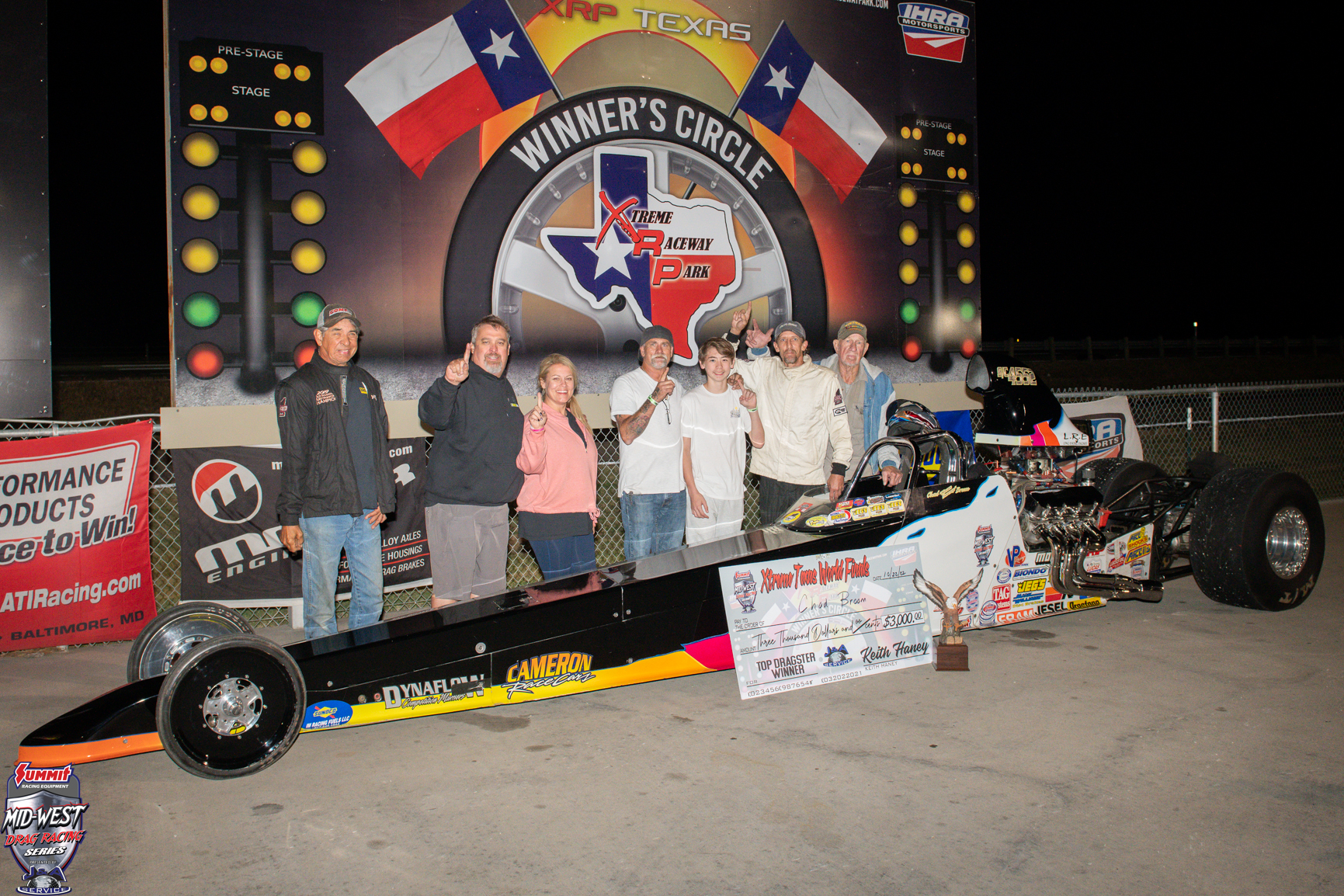 The Top Dragster final round featured an all-Texas throwdown between Chad Broom and Jessica Ogden, who won the MWDRS season opener at XRP. Broom’s .001 reaction time and 4.776 on a 4.73 dial-in allowed him to hold off Ogden and her solid 4.411 on a 4.41 dial-in. 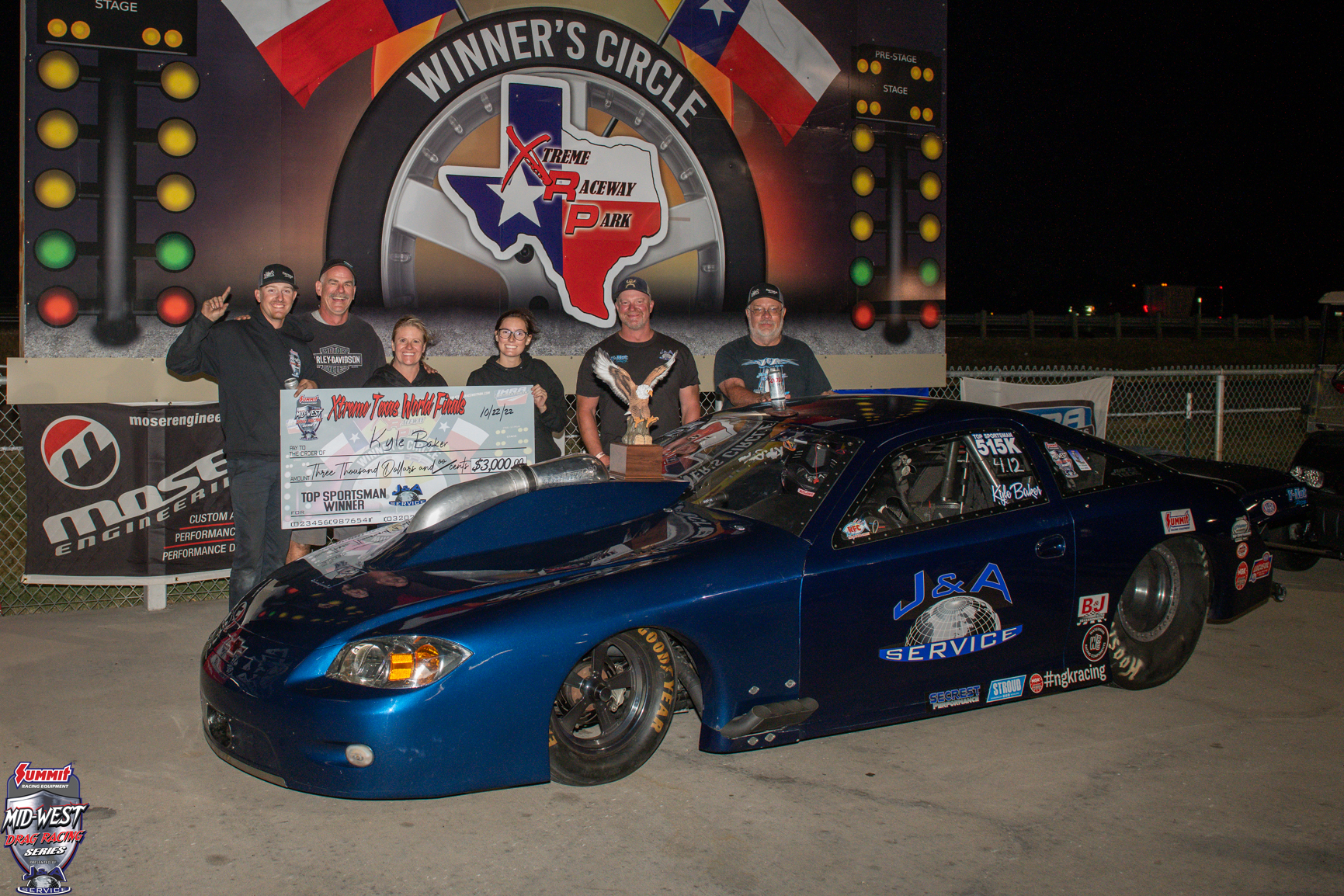 Fresh off a runner-up finish at the Great Bend make-up race held at Tulsa, Kyle Baker turned on the final-round win light in Top Sportsman. Driving his boosted J&A Service ’08 Cobalt, Baker won with a 4.137 on a 4.12 dial-in. Opponent Bob Gulitti followed with a 4.073 on a 4.03 dial-in in his nitrous-fed NTG ’67 Mustang. Baker and Gulitti had nearly identical reaction times – .014 for Baker and .015 for Gulitti. 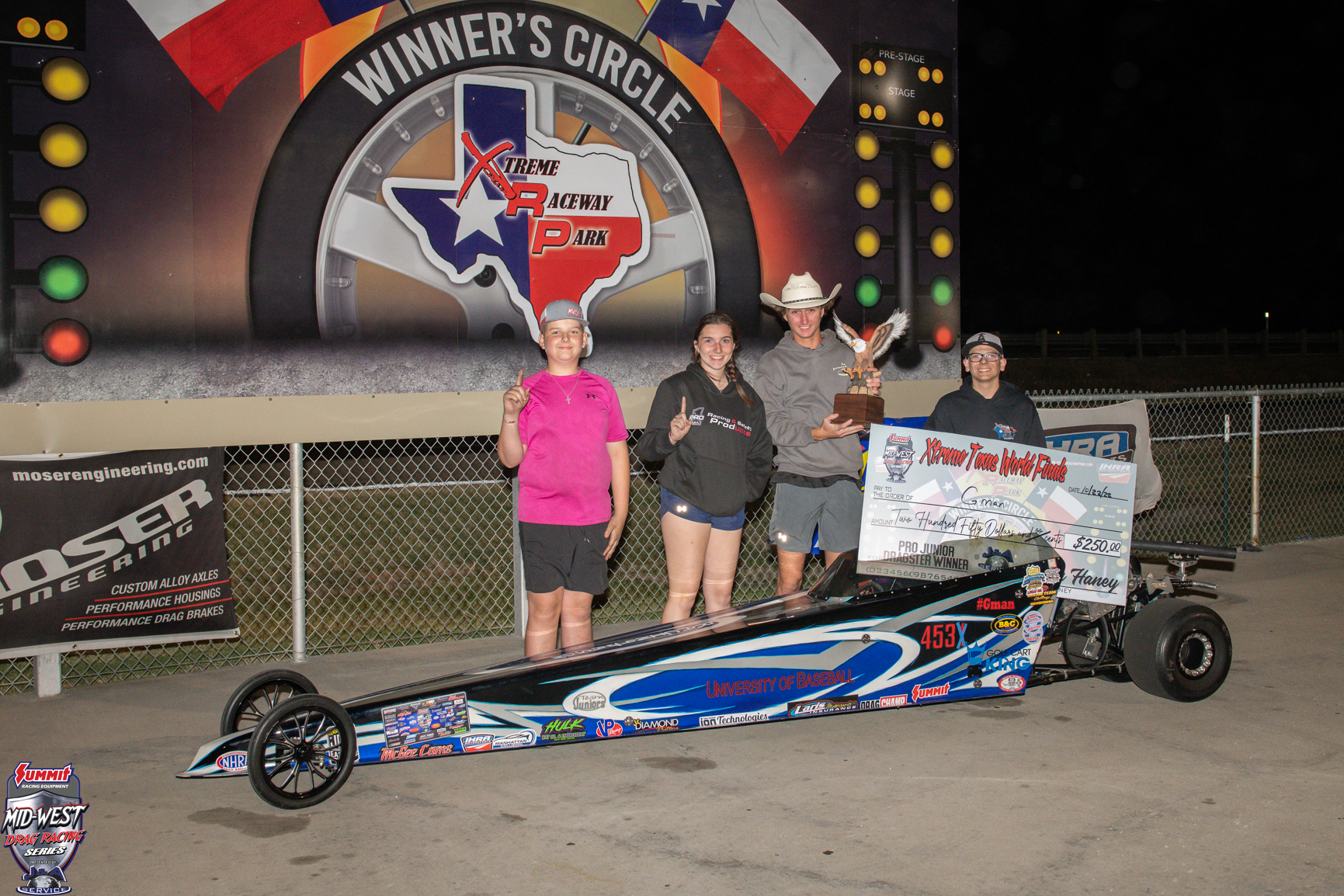 Graeme Rufenacht scored the Pro Jr. Dragster win, thanks in part to a quicker reaction time in the final round. Rufenacht ran an 8.191 on an 8.14 dial-in to defeat Maddy Poplawski and her 7.935 on a 7.90 dial-in. 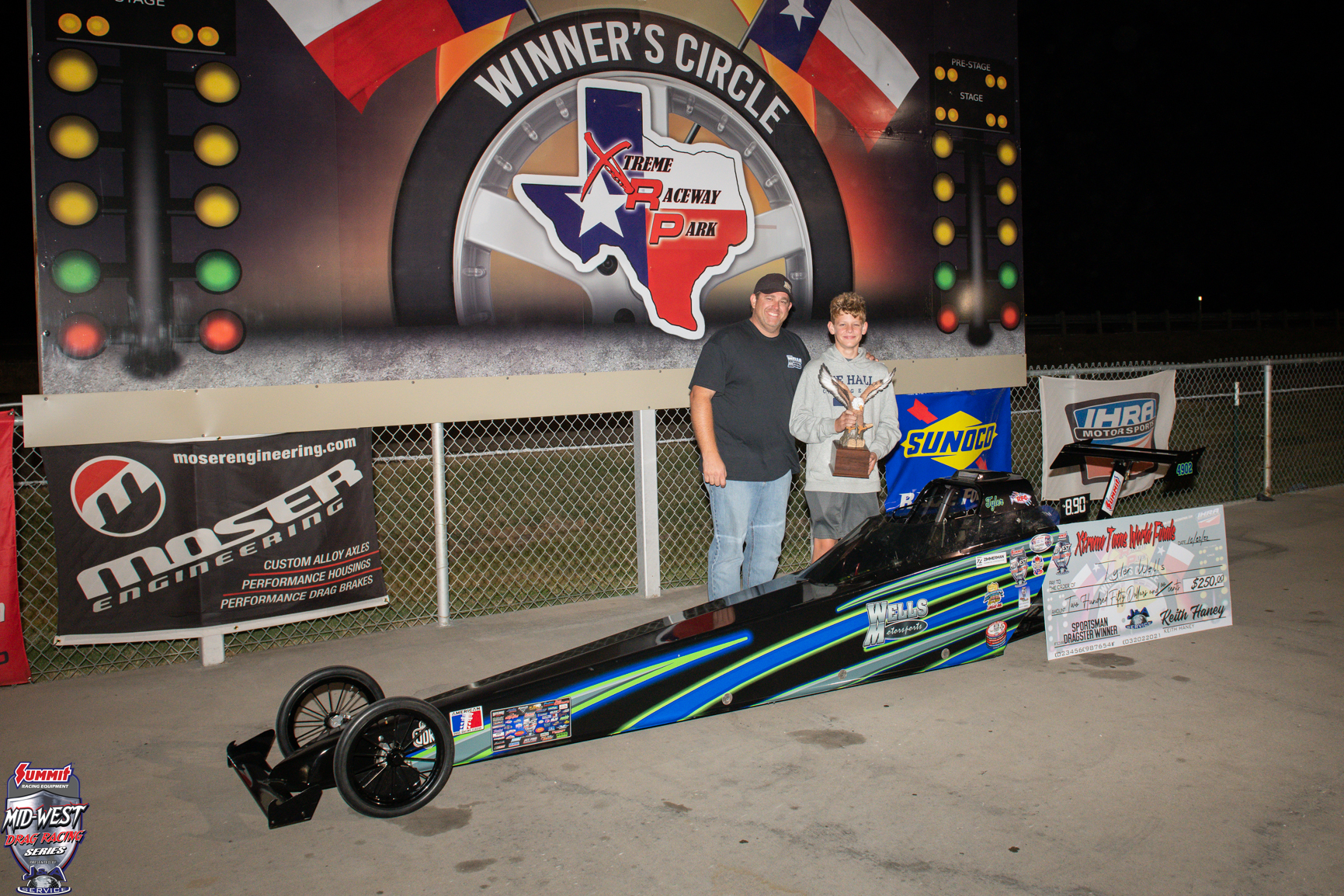 Sportsman Jr. Dragster season champion Tyler Wells added one more win to close out his stellar season. The Oklahoma driver beat Makenzie Roberts in the final round, with Wells’ 8.932 on an 8.90 dial-in topping Roberts’ 8.985 on an 8.94 dial-in.

The MWDRS will hold a special awards banquet on Saturday, Jan. 7, 2023, in Claremore, Okla., to celebrate the 2022 champions.