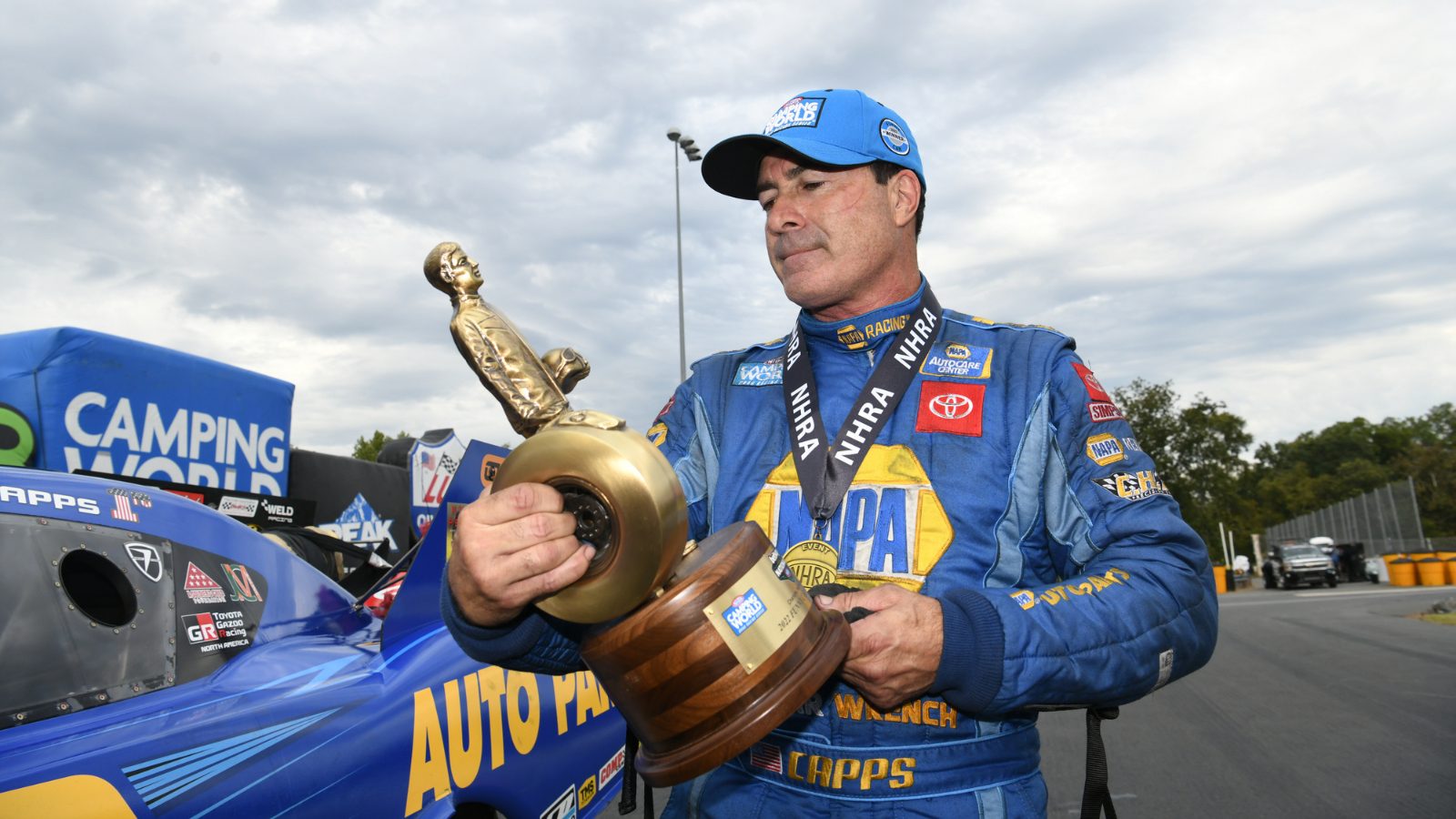 Ron Capps raced to victory for the fourth time this season on Sunday afternoon during the Betway NHRA Carolina Nationals, defeating Alexis DeJoria in the final round to move up to second place in the NHRA Countdown to the Championship standings.

Including his runner-up finish in Brainerd, Minn. and Indianapolis triumph, Capps has now taken his NAPA AUTO PARTS Toyota GR Supra to the final round at three out of the last four events, placing him solidly in the championship hunt after the second of six playoff events, but the 28-year NHRA veteran is careful not to get ahead of himself.

“I try not to get that jacked up about it,” Capps said during his post-race interview. “I’ve been around the block, and I’ve driven for the ‘Snake’ (Don Prudhomme), and one of his favorite quotes is, ‘don’t drink your own bath water,’ meaning don’t start reading your own press and getting too high and mighty on yourself. I knew in Indy we had a great car, but we weren’t going to live off of that. I’ve been around long enough to know to keep my mouth shut because you look at what happened where we won the U.S. Nationals, and then went out second round last weekend in Reading (Pa.); we were humbled. That’s drag racing, you can’t get cocky, you can’t mouth off because that sort of thing will happen to you in a heartbeat.” 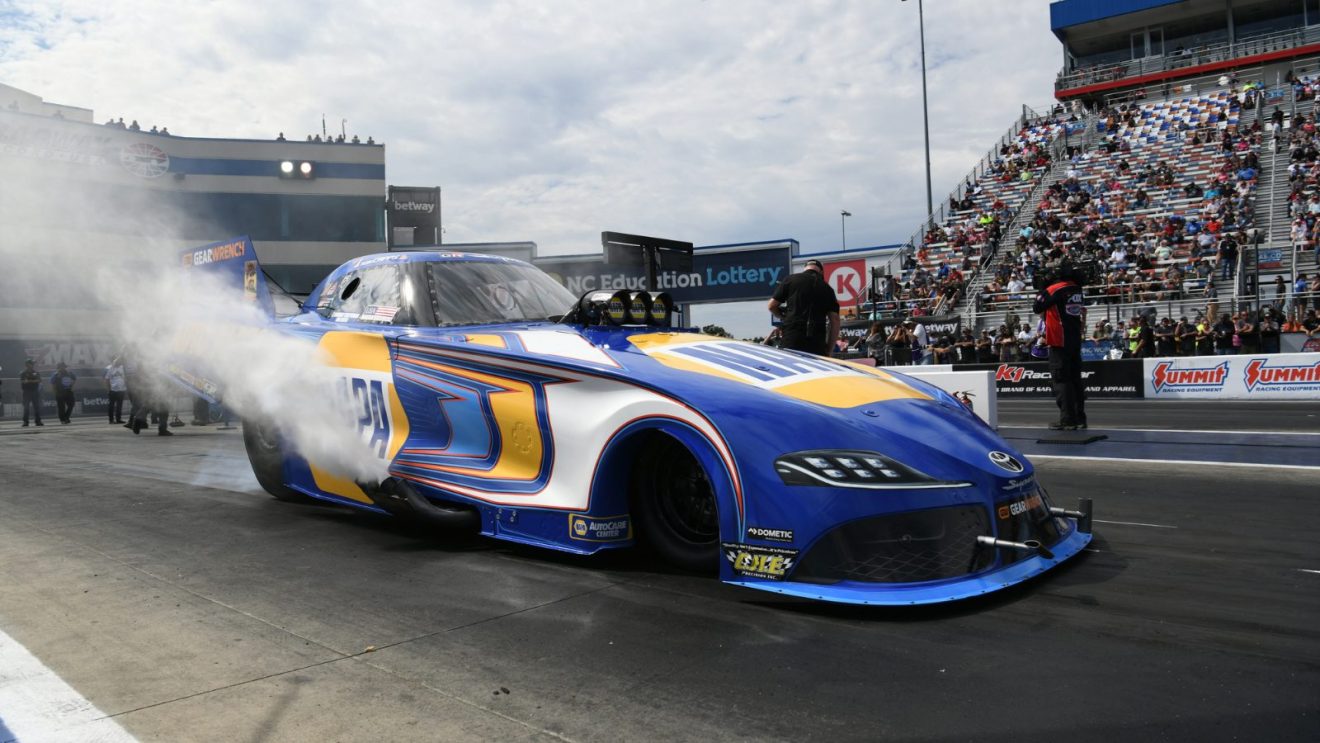 As the two-time and defending NHRA Camping World Series Funny Car champ, Capps is pursuing his third title overall, and first for Ron Capps Motorsports in its rookie season. By capturing his fourth zMAX Dragway victory, and 72nd overall, Capps successfully narrowed the margin separating him from No. 1-ranked Robert Hight to a mere 27 points with four races remaining until the 2022 Funny Car world champion is crowned.

Capps began his march to the Carolina Nationals winner’s circle by powering the NAPA AUTO PARTS Toyota GR Supra to a 3.866 E.T. at 334.90-mph in the opening round of qualifying to earn the No. 4 spot on the Funny Car eliminations ladder. His run through the field began with a first-round victory against Blake Alexander where he posted a 3.889 to defeat his tire-hazing opponent. In the quarterfinals, Capps sat buckled into his Supra, ready to take on championship-challenger Bob Tasca, and watched as Hight was defeated just before Capps was set to run. The Dean ‘Guido’ Antonelli/John Medlen-led NAPA team knew they had to capitalize on Hight’s early exit and seize the opportunity to make up ground in the points.

Antonelli and Medlen turned up the wick and tuned Capps’ NAPA Supra to a stout 3.885 E.T. at 335.07-mph to score the top speed of the meet and set up a semifinal match with John Force. The two winningest Funny Car drivers in the history of the sport lined up ready to battle for a bid to the finals. Capps moved first and never trailed for the win, posting his third consecutive 3.8-second run to reach his sixth final round of the season.

The final round featured an all-Toyota Gazoo Racing showdown with Capps squaring off against Alexis DeJoria to vie for the Carolina Nationals Wally trophy. The TGRNA teammates staged their Toyota GR Supras, and Capps stood on the throttle first to secure the early lead but his machine went silent near halftrack shortly after DeJoria had suffered a similar fate. The race came down to a coasting match with Capps getting to the finish line first for the win.

“I just wanted to get back into the fight, and that’s what we did today,” explained the first-year team owner. “We saw Robert go out in front of us, and we knew that was our opportunity, and every round we could pick up would be big. You can’t count on Robert Hight and (crew chief) Jimmy Prock to do that very often, and we knew we needed to take advantage.

“Every round win was huge; it was ‘championship Sunday, Pomona final round huge,’” Capps added, but again, was careful not to get ahead of himself.  “I had read something in the media after last week that Robert had closed the door on the championship with his Reading win and he was 80 points out, and all I could think was ‘you’ve got to be kidding me, it’s only the first race of the Countdown.’ They dominated, they’ve ran well, but there’s just too many good, talented Funny Car teams so the championship is far from locked-up at this point.”

For Capps, Sunday’s win was extra special as he learned of a dear friend’s passing on Friday night, and was racing with him in his thoughts.

“I’m dedicating this win to Balin Hewson and his family,” he said, his voice tinged with emotion. “I first met Balin and his family when he was our NAPA Honorary Crew Member during the 2014 Indy race, and we became very close. He was diagnosed at a young age with a life-threatening disease and wasn’t expected to make it to his teenage years, and here he was, getting ready to celebrate his 21st birthday. He was just someone who lit up the room. He was an avid, avid follower of our team, and his family are NAPA AutoCare Center owners.

“This has been a tough day all day today. He’d be doing donuts in his wheelchair right now, and would’ve been the first one to text me to say congratulations. When his father called on Friday night and shared the news of his passing, it was a shock. We really wanted to win for him today, and I think we had some help from him. I can’t wait to take this trophy to Phoenix and give it to his mom and dad.”