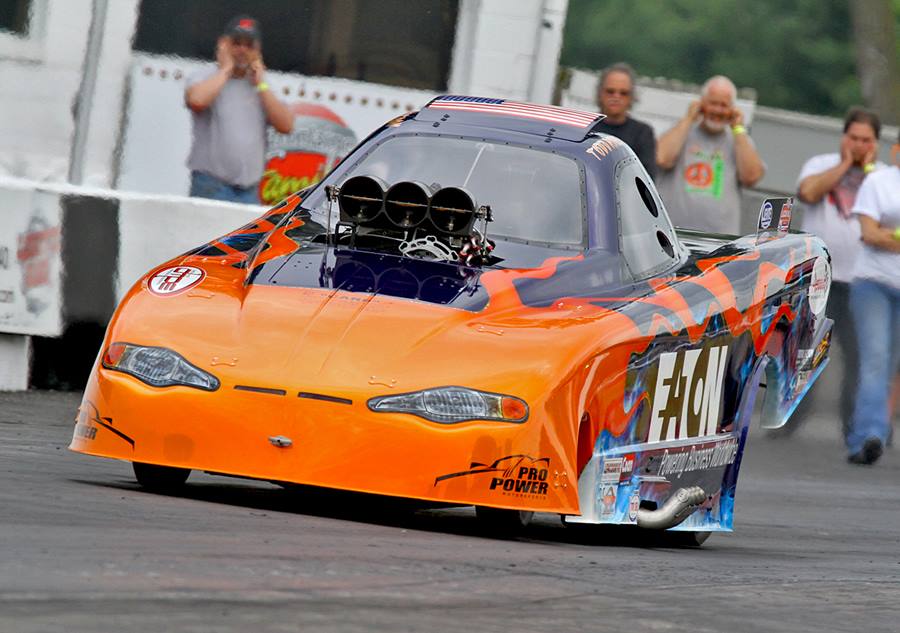 Todd Robertson will be back behind the wheel of his Top Alcohol Funny Car this weekend (June 27-29), competing at the 17th annual O’Reilly Auto Parts Route 66 Nationals just outside of Chicago in Joliet, IL.

Robertson and his Eaton-backed team are returning to Route 66 Raceway just a few weeks separated from his last outing, the NHRA North Central Division “Burn Down at Sundown.” After their last outing the Michigan-based team stayed in Joliet to test and after the results they are excited to be heading back.

“The more familiar we get with the guys we run with, the more you get to spend time talking shop with them,” crew chief Dennis Kolomyjec said. “There’s guys out here with 15 to 20 years of specific knowledge that make a living because of this industry, but if they see you need a hand they will drop what they are doing to help you fix something, make a round, or even just give you some pointers to help your progression.

“We were lucky enough to have the guys from Torque MGMT of Champaign, IL come by the last time we were in Chicago and point out some stuff and kinda be an extra set of eyes for us when we stayed to test. I think we may have just gotten that shot in the arm we needed. We’ll see this weekend.”

While the weeks of preparation before any national event are always packed with hard work, this year was a lot less stressful than the last time the Eaton team prepared for this event. Robertson spent nearly a month away from home criss-crossing several states collecting and repairing parts in order to compete at last season’s Route 66 Nationals.

“It was something. I’m not going to lie; it was fun,” Robertson recalls. “Doing it and focusing solely on racing for that period of time while seeing parts of our great country that I had never seen before was a great experience, but when it was all said and done I was glad to get home to my wife and my boy.”

To follow all the action of the 17th annual O’Reilly Auto Parts Route 66 Nationals, log on to http://www.dragracecentral.com,  or follow along at NHRA.com. The first rounds of qualifying for the Top Alcohol classes will be Friday at 11:30 a.m. and then again at 3 p.m. The final round of qualifying is set for 2:30 p.m. on Saturday with final eliminations set to begin at 9 a.m. Sunday.