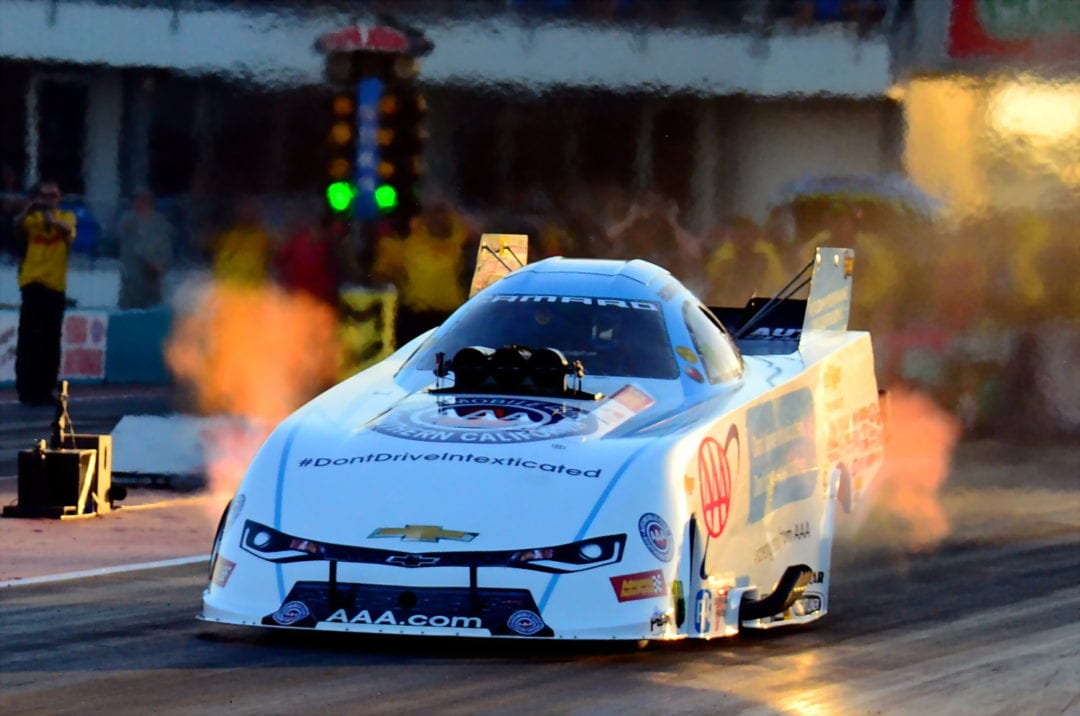 Just the fact that Robert Hight was in the Lone Star State and racing his 10,000-horsepower Funny Car was impressive itself, but that he wound up winning the AAA Texas NHRA FallNationals Oct. 7, at the Texas Motorplex was nothing short of amazing.

“That was one of the biggest rounds I’ve ever won in my career, because J.R. Todd, he was 30 points behind me going into the final and there’s 20 points available to win, so if I had lost I’d be just 10 points ahead, but now I have a 50-point lead, so that’s a 40-point swing,” he pointed out.

Two weeks earlier, the defending class champion was in St. Louis, where just as he crossed the 1,000-foot finish line at Gateway Motorsports Park to win the AAA Insurance NHRA Midwest Nationals, most of the body on his John Force Racing flopper was sent sky high by a violent engine explosion. Though Hight brought the car to a safe stop and exited under his own power, no one realized at the time that the subsequent crash into the left guardwall had broken his left collarbone.

After being examined at a local hospital and being told to expect an eight-week recovery time while the bone fused itself, Hight flew home to California where he met up with former Automobile Club of Southern California CEO and longtime team supporter Tom McKernan, who took him to seek additional medical opinions. The first doctor he visited reaffirmed what Hight was told in St. Louis; however, Dr. George Hatch at USC’s Department of Orthopaedic Surgery predicted just a two-week recovery if Hight went through with internal fixation surgery that used a metal plate and screws to rejoin and stabilize the fracture to speed healing along.

Not surprisingly, he chose Option 2 and underwent surgery just nine days before the FallNationals began.

That wasn’t enough to get him back in the Funny Car championship chase, though. While his team busied themselves under the leadership of crew chief Jimmy Prock building a new car from the ground up, Hight secured a carbon-fiber shield from Simpson similar to what Pro Stock racer Greg Anderson used to keep his shoulder belts away from the surgery area after undergoing a heart procedure a few years ago.

“I took that, measured around my chest and we got a mannequin and put towels around it and got it to the same size and put the head-and-neck restraint (HANS) on it and then put this thing from Greg Anderson on it and built ears off it of carbon fiber to go to the HANS device and the belts come over that. There’s room underneath to protect my collarbone,” Hight explained.

With the seatbelt cushioning device in hand, he returned to see Dr. Hatch about gaining clearance to compete in Texas, less than two weeks after the St. Louis crash. “I did everything like he said, went back late on Thursday to get my clearance, and he said I wouldn’t have gotten the clearance if I didn’t have that device.”

After making his first qualifying pass on Friday in Texas, Hight knew he’d be okay to go the distance.

“I was most worried about the chutes because it slams you forward when you hit the chutes, but no issues,” he said. “But I probably couldn’t have raced without that piece. It’s actually comfortable and I may never take it off. One of the first things I did was thank Greg Anderson for giving me a start.”

Hight qualified sixth in the Funny Car field, then raced through Jim Campbell, Tim Wilkerson in a repeat of the St. Louis final, and Bob Tasca III to reach Todd, who took out Texas racer John Hale, Jack Beckman and polesitter Tommy Johnson Jr. in the semis.

“What’s really cool is it’s two Triple-A races in a row that you’re winning in front of your sponsors,” Hight said of winning at the Motorplex, something he accomplished in both of his previous championship-winning years (2009, 2017).

“And I think we’re on our way again,” he added. “I made a prediction early on going into the Countdown that I need to win three races and not have any first-round losses, and so far, so good. You know, we’re halfway through, we’ve got two wins and a semi-final, but 50 points isn’t a big lead over J.R. Todd. That car is strong and running well. He’s been to two finals and we have to keep pushing. And Pomona is points-and-a-half, so anything can happen. We just have to keep pushing.”