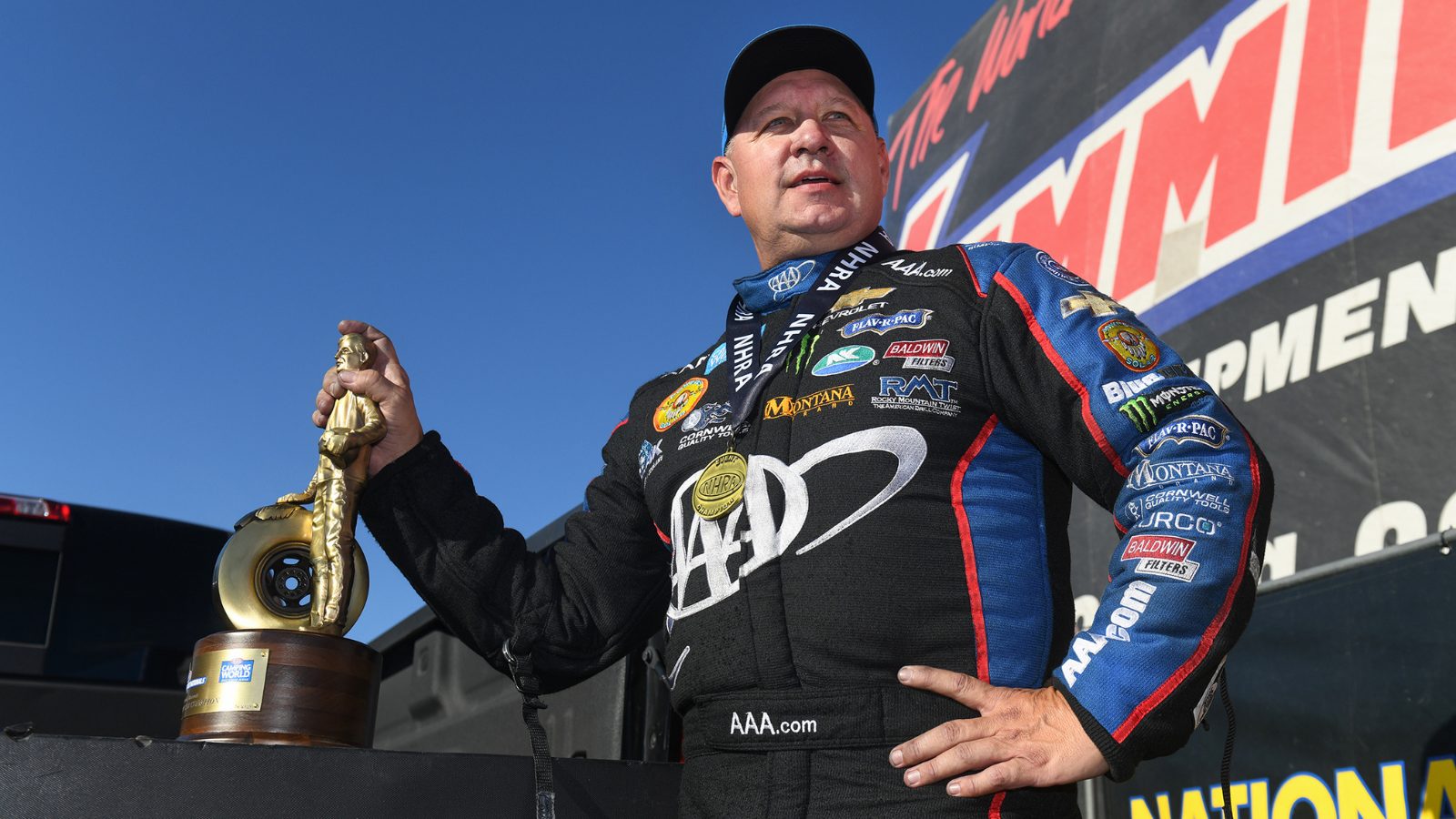 Robert Hight and the AAA Missouri Chevrolet Camaro SS team raced to a career best eighth win of the season, 61st of Hight’s career and third at World Wide Technology Raceway Sunday at the NHRA Midwest Nationals. John Force and the PEAK Antifreeze and Coolant Chevy raced to their fourth consecutive semifinals appearance. In Top Fuel, Brittany Force and the Flav-R-Pac / Monster Energy team had a second-round exit after handing Austin Prock and the Montana Brand / Rocky Mountain Twist team a first round loss.

Coming in as the No. 1 qualifiers, Robert Hight and the AAA Chevy had the added bonus of a bye run in the first round. The AAA Missouri Camaro would run into tire smoke around half track and click off going only 4.076-seconds and 238.60 mph. Matched with veteran racer Tim Wilkerson in the second round. It would be a clean side-by-side drag race with Hight driving around Wilkerson for win. Hight would have the quickest pass of the round at 3.903-seconds and 330.72 mph bettering Wilkerson’s 3.972 at 326.24.

In the semifinals, Hight would take on season-long rival, and No. 2 in the points, Matt Hagan. Hight would maintain his consistency taking the AAA Chevy to a 3.913-second pass at 327.59 mph to defeat Hagan’s 3.945 at 330.31 sending Hight to the finals to face reigning world champion Ron Capps for the 80th time in their careers. Hight would have the starting line advantage with a .041-second reaction time to Capps’ .059. Capps would put up a fight to chase down Hight but ultimately, Hight’s 3.911-second pass at 331.61 mph would get the hole shot win over Capps’ 3.908 at 330.47.

“You definitely can’t be racing defensively, you have to be on the offensive, have to be pushing it to the edge every round, every run and I really feel I have the best guys in my corner to do that. Every weekend the competition gets tougher and tougher, every round is important and huge. This AAA Missouri team, they just keep digging,” Hight said. “That final round was a 40-point swing, if we had lost, Capps would only be a handful of points behind us. Don’t get me wrong though, that 46-point lead isn’t a security blanket either. We still need to be focused and this team is up for it. We don’t need to change anything, just keep doing what got us here. What we’ve been doing all year has worked. We just need to keep steady; we can’t stress and hopefully more wins will come from it.”

Not only was it Hight’s eight win of the season, the 61st of his career and third at World Wide Technology Raceway, it was also a milestone win for John Force Racing. It was the 300th professional NHRA victory of John Force Racing’s existence. Hight also won the 200th John Force Racing victory against then teammate Mike Neff in Topeka, Kansas 2011.

Fore and the PEAK Chevy, the No. 2 qualifiers, opened race day with a 3.925-second pass at 326.24 mph to defeat Terry Haddock who smoked the tires early for 13.006-second run. Force would have to really work for his win against J.R. Todd in the second-round. The PEAK Chevy would be out of the gate first but trade the lead with Todd twice before finally crossing the line at 3.968 and 324.28 bettering Todd’s 3.967 at 321.58. In the semifinals, Force would match-up with Capps for the 120th time.

“Well not a bad weekend for this PEAK Chevy team. We keep ourselves in the conversation every weekend and that’s what we need to be doing. We’re picking up some qualifying points, picking up round wins. It all matters, it all counts,” Force said. “The competition out there, it’s amazing. I’m just trying to keep up. Robert up there with AAA, that’s who we’re all chasing really. They got the job done again and I don’t think they’re done. It’s going to be a tough last three races, we’ll see what happens.”

Brittany Force and the Flav-R-Pac / Monster Energy team had a stellar first round victory over teammate Austin Prock. While Prock would put a cylinder our and smoke the tires, Force would handle her David Grubnic and Mac Savage tuned Flav-R-Pac machine to 3.665-seconds at a national speed record 338.43 mph. In the second round, it would be Force who had a cylinder out early. The Flav-R-Pac dragster would be unable to recover going 3.833-seconds at 322.81 mph to Doug Kalitta’s 3.768 at 324.83.

“Given where we are at in this Countdown, this Flav-R-Pac / Monster Energy team is only 30-points behind. We have struggled but the top is still not out of our reach. Those 30 points are not much, we could make that up in one good solid weekend. Going to wrap up here having found our problem, had a cylinder out right from the step but we have answers on that,” Force said. “We go to Dallas next, had success there before, won the Stampede of Speed Friday Night Live qualifying event last year and I’ve won the race in the past. We’re all anxious to get there, excited to get there and we’ll be looking for some big improvements.”

After a NHRA timing issue put Austin Prock and the Montana Brand / RMT dragster in the No. 12 spot, they opened race day against teammate Brittany Force in the first round. Prock would have a cylinder out at the hit before driving into tire smoke and having to shut it off. The first round exit will put him No. 10 in points.

“Just a tough break this morning for the Montana Brand / Rocky Mountain Twist team. We haven’t dropped a cylinder at the hit in probably 15 races, so it’s just one of those things, you put nitro in the engine and funny stuff happens sometimes,” Prock said. “Definitely frustrating and not the way we wanted to end this weekend, but we’ll be okay going into Dallas. Our race car, when we make the right decisions, performs really well and I think we’re capable of going rounds there. In 2019 we had a really good weekend there. We have all those notes from that race and hopefully we can repeat and go one round further.”

The NHRA Camping World Drag Racing Series Countdown to the Championship continues with the Texas NHRA FallNationals at the Texas Motorplex just outside of Dallas, October 14-16.