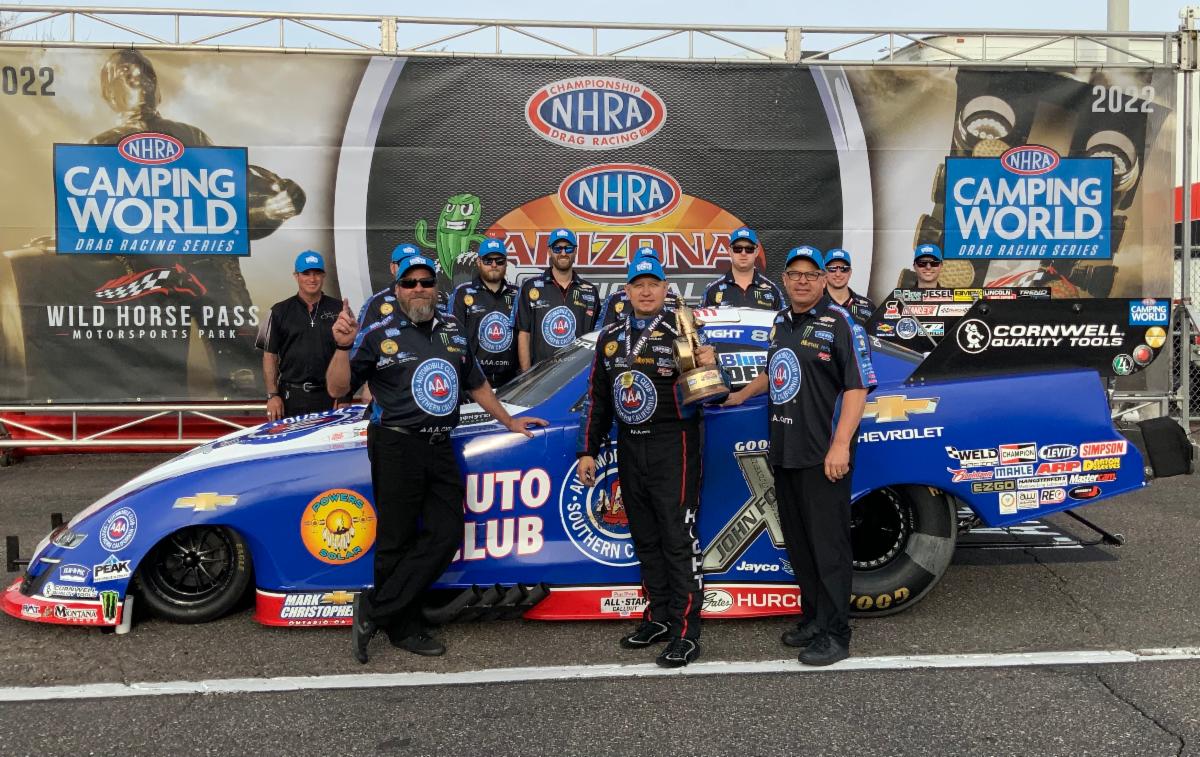 Robert Hight and the Automobile Club of Southern California Chevrolet Camaro SS team earned their second consecutive victory Sunday at the NHRA Arizona Nationals at Wild Horse Pass Motorsports Park. John Force moved the PEAK / BlueDEF PLATINUM Chevy Camaro SS to seventh in points with a semifinal finish while Brittany Force and the Flav-R-Pac / Monster Energy team had a quarterfinal appearance and Austin Prock and the Montana Brand / Rocky Mountain Twist dragster had a first round exit.
For the first time in his career, Robert Hight and the Auto Club Chevy team have started the season with back-to-back victories as they worked their way to the 55th win of Hight’s career, his second at the Arizona Nationals. The three-time championship team started the day in the No.2 qualifying position racing Paul Lee. Hight would handle his Chevrolet to a 3.864-second pass at 329.42 mph while Lee would smoke the tires for a 9.484 setting Hight up to run against long-time rival Bob Tasca III.
The Jimmy Prock and Chris Cunningham led Auto Club team would rally to 3.855-second pass at 330.55 mph to send Tasca’s 3.922 at 332.84 packing. With the win, Hight would have a semifinals battle against boss and 16-time champion John Force. Hight would keep it consistent, taking his Auto Club Funny Car to a 3.847-second pass at 326.63 mph while Force would struggle keeping traction to run 7.231 at 86.59.
In the finals it would be John Force Racing versus Tony Stewart Racing (TSR) as Hight lined up with Matt Hagan. Hight would deliver another on par run at 3.837-seconds and 330.39 mph to deny TSR their first team win. Hagan would have a 4.045-second pass at 267.00 mph after shutting off near the 600-foot mark.
“This is amazing. You have no idea what it’s like to win one race. I still feel that the Funny Car class is the toughest class out here. From top to bottom, it’s stacked and any given weekend, anyone could step up and win. So, to go and win two in a row in this day and age, that is amazing,” Hight said. “And if you look back to this strong string of runs that we’re on: five in a row at Auto Club Raceway in the .80s, come her and have seven runs in the .80s, that’s pretty impressive what Jimmy and Chris and the whole Auto Club team came up with over the winter. Even yesterday when the track was 107° and we went up there and ran .84, you don’t surprise Jimmy very often, and that run surprised him, and it surprised me too. I’m very fortunate to drive this thing right now. It’s what you dream about and it’s not going to get any easier from here on out. You’ve got big battles – last weekend with Capps, this weekend with Hagan, and you’re going to see a lot of these battles all year long. We just hope we’re up for it.”