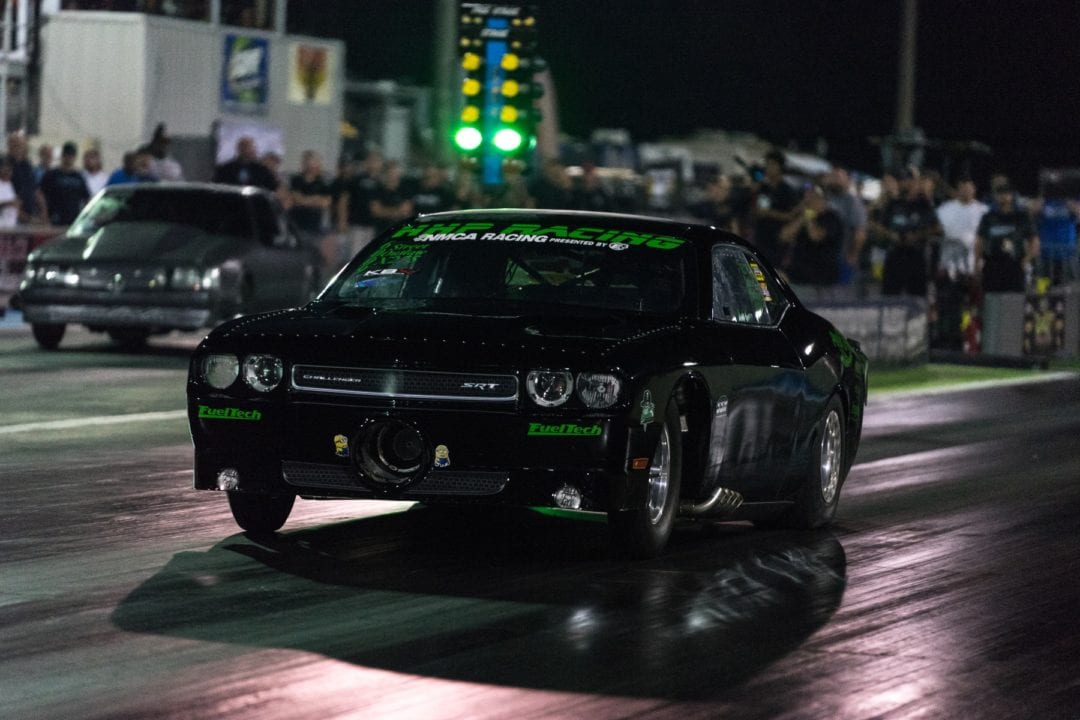 A trip to the NMRA/NMCA Super Bowl at Route 66 Raceway near Chicago has turned into an annual vacation for Rob Goss and his family, who hail from Sheridan, Wyo. With his children in school and his wife working as a teacher, it represents a chance for the entire family to enjoy a racing weekend together, forming a lot of special memories in the process.

This year, though, the trip represented an ultimate low in Goss’ racing career. He suffered through a miserable weekend and first-round loss, prompting the Street Outlaw/X275 racer to make wholesale changes on his ’11 Challenger and in his racing program.

“That was our turning point. The NMCA Super Bowl was our rock bottom,” Goss said. “I couldn’t have done any worse. I left there pretty disappointed and knew something had to change.”

He brought in Wade Hopkins from Southern Speed Solutions to make the tuning calls, and the turnaround has been immediate and impressive. Goss went to the semifinals at the NMCA race in Norwalk in August and followed it with his first career NMCA win at the event at Indy in September. He topped it off with the biggest win in his racing career, taking down No. 1 qualifier Shane Fisher in the final round last weekend to win No Mercy 9 in X275.

It’s an incredible story of perseverance for Goss, who first started competing at Donald “Duck” Long’s Lights Out and No Mercy races five years ago. He had enjoyed a couple visits to the semifinals, but never the ultimate glory in the winner’s circle. Now, his car is quick and consistent, he’s been dynamite on the starting line to beat some of the top names in the class and Goss has a victory he’s been waiting for his entire career.

“It’s an extremely gratifying feeling,” Goss said. “This is a big one and something we’ve strived for and worked for endlessly. To finally win it, it was an emotional return road I can tell you that. I was laughing, I was crying, I was screaming and I was bending my steering wheel in the car. It was so gratifying. It makes what you do worth it. It’s hard for me to put it into words, but it was great. I’m still living it. I’m proud to finally able to put all the pieces together and make the win happen.”

The pairing with Hopkins has worked perfectly, especially when it comes to consistency. When he agreed to work with Goss, he immediately started sending the tuner logs and went testing prior to the NMCA race in Norwalk.

The differences were immediate and impactful, as Goss made a number of strong runs there. They tested again before Indy, where Goss beat the likes of Daniel Pharris and then Shawn Ayers in the final round of Street Outlaw.

Still basking in that first-time accomplishment, longtime engine-builder Tony Bischoff put a 430 cubic-inch Gen III Hemi for No Mercy. The team made only one test pass before qualifying, but things came together flawlessly.

“When Wade took over tuning, the results were immediate. The guy is awesome,” Goss said. “We had good times and good speeds in Norwalk, and I knew it would only get better. He’s very analytical and analyzes all the fine points. We had a great car with a great engine and great pieces of equipment. But we couldn’t make the most of what we had and Wayne could.”

Goss qualified third in X275 at No Mercy, going 4.40 at 165.42 mph. But qualifying high had never been a problem for Goss and his team. Where things tended to falter was in eliminations, but Goss was on point at South Georgia Motorsports Park.

The Challenger was consistent in eliminations, outrunning Tom Marshall and then John Capolla with a strong 4.40. Goss followed with a holeshot win against John Keesey to reach the semifinals, where he beat No. 2 qualifier Kenny Hubbard. Goss’ 4.526 held off Fisher in the finals, leaving him with two straight wins. It’s been the hottest stretch of his career, but Goss has always made the most of every situation in the process.

“We had let opportunities let slip through our fingers at other times,” Goss said. “We were good enough to get wins prior to that but we weren’t able to capitalize. We had this opportunity again and had to do whatever we could. These opportunities only come around only so often, so you have make most out of what you can. It’s definitely on your mind working through the elimination rounds, but I don’t put any undue stress on myself or anyone working with us. Whatever we do, we do as a team.”

From a year that started with so many struggles, the current hot streak is a testament to Goss’ willingness to leave no stone unturned to find success. He’s stayed upbeat through the downtimes and any harsh words from the naysayers, finding a winning combination.

It leaves Goss excited for the future, also indicating these two wins have only motivated him more.

“The struggles do make the successes better. It’s a good feeling knowing we didn’t give up,” Goss said. “It does make you feel gratified, but we’re not satisfied with winning two races. We want to keep going. We knew this was possible, we just had to figure it all out.”