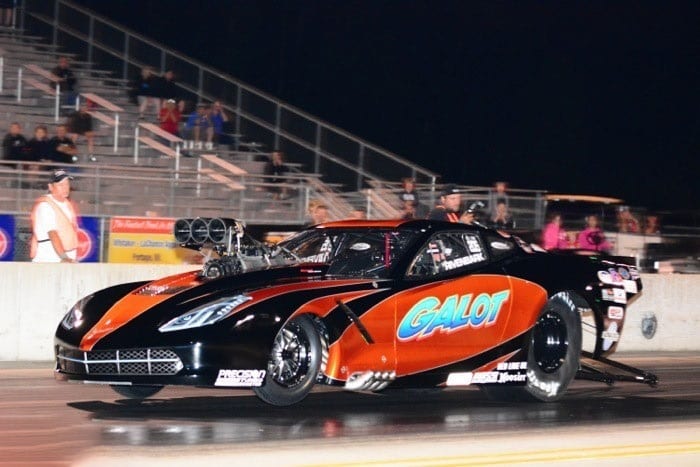 June 25th through the 27th, Professional Drag Racers Association (PDRA) held the fifth event of the 2015 season, the PDRA Summer Drags, at US 131 Motorsports Park in Martin,MI. Drivers Todd “King Tut” Tutterow and Kevin Rivenbark of the Galot Motorsports team based out of Clinton, NC were pleased with their performances in both the NAS Racing Pro Extreme and Precision Turbo Pro Boost classes.

After exploding an engine during Thursday’s test session, Tutterow’s crew got busy changing engines in his 1969 screw-blown Camaro for Friday’s qualifying in the elite NAS Racing Pro Extreme class. With a fresh engine Tutterow qualified 9th with a 3.62 et at 208 mph. Rivenbark in his brand new Galot Motorsports Jerry Bickel-built 2015 Corvette made several impressive passes right out of trailer during the PDRA’s test session on Thursday which served to help him qualify 11th of 24 cars trying to make the field in the Precision Turbo Pro Boost class. Rivenbark’s Corvette also took home the prestigious PDRA “Best Appearing Car” award for Galot Motorsports team.

After a long rain delay on race day the Galot Motorsports team was ready for action, Todd “King Tut” Tutterow had to face friend and former teammate Tommy D’Aprile in his Mel Bush Corvette. D’Aprile, always tough on the tree, went -0.021 red to give Tutterow the win as Tutterow’s car went into tire shake and he had to get off the throttle. Rivenbark faced Brian Hicks in his orange turbo-powered Duster. Hicks was better on the tree and took the win with his 3.885 et to Rivenbark’s 3.879, the fastest et that he has had so far with the new Corvette.

“I am really happy with my new Jerry Bickel Corvette,” Rivenbark remarked. “The car works really good but I just missed the tree. I am really looking forward to Maryland next month; this Corvette is going to be bad.”

Tutterow took on Randall Reid second round taking the win over Reid with a hole shot, Tutterow’s 3.591 et defeating Reid’s 3.577 et. He then advanced to the semifinals to face Bader Ahli of the NAS Racing team. Tutterow lost on a hole shot handed to him by Ahli but Tutterow made a stealer run, putting down a 3.583 at 211.86 mph.

“Our Galot team did a great job this weekend. Jeff Bohr and I did some celebrating with the tune ups we found and our guys all did great this weekend. They worked hard with very little sleep. I am extremely excited about Budds Creek next month but we have a lot of work to do in the meantime. I want to thank Mr and Mrs Wells because without them none of this would be possible,” Tutterow stressed.

Many noticed the absence of John Strickland in the Precision Turbo Pro Boost class at the PDRA Summer Drags. Strickland was competing in the NTPA (National Tractor Pullers Association) in Toma, WI with the Galot Motorsports Tractor Pulling team and could not be present but is looking forward to his return in September to the PDRA.