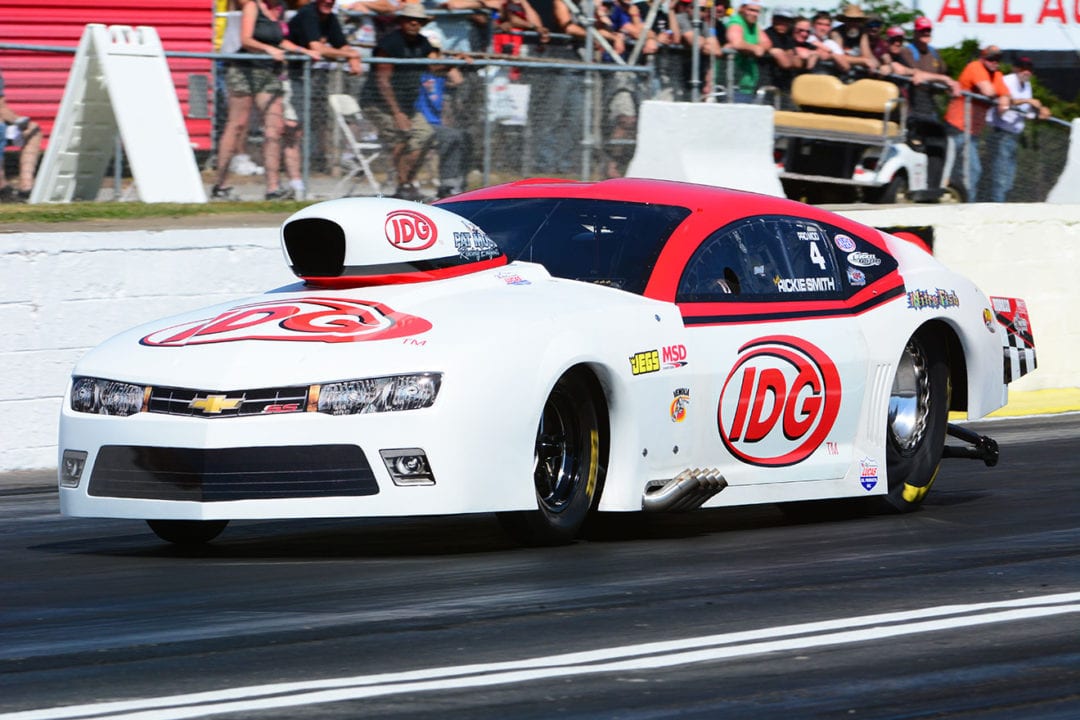 “Tricky” Rickie Smith extended his points lead in the J&A Service NHRA Pro Mod Drag Racing Series with another impressive win at the NHRA Southern Nationals at Atlanta Dragway. In the three events contested on the tour thus far, Smith has been in every final round, with a second victory coming in Atlanta.

Smith’s Musi-powered, IDG-backed 2015 Camaro led the pack with a 5.781-second elapsed time at over 250 MPH. He continued his domination in eliminations and was the quickest car in three out of the four rounds of competition, taking down Gerry Capano, Doug Winters and Steve Matusek en route to the finals. Former Top Fuel pilot Khalid Al Balooshi was driving Smith’s backup car at the event, which was also toting a Musi Racing engine that qualified him third. Al Balooshi nearly made it an all-Musi final, powering to the semifinals before succumbing to Kevin Fiscus on a holeshot loss. In the Smith/Fiscus final, Fiscus once again had a holeshot lead, but Musi power allowed Smith to overtake Fiscus early and he never looked back, posting a 5.873 to Fiscus’ 6.072. Smith now sits 147 points ahead of Danny Rowe in the championship points standings.

“The track was pretty hot and tricky down there in Atlanta,” Smith described. He said he had to pull from his past decades of racing at local tracks around his North Carolina home in order to navigate the Atlanta Dragway quarter mile. “We’re being consistent right now. We lay down some good runs when the track is really good, but there’s other cars right there within a hundredth or two of us. So I’m just tickled right now that we’ve been able to go up and down some of these hot tracks here lately.

“Pat and Richard Maskin at Dart Machinery have created a cylinder head for these engines that really fits our needs,” Smith said. “Pat is a heck of an engine builder and I think he’s done an awesome job with these engines. He’s got a lot of power. I think between me and Tommy [Franklin] we’re probably some of his frontrunners. I hope we’ve helped him develop his program and figure out what needed to be done to fine-tune the setup. We’ve just got an awesome [engine] program right now. I think me and Tommy both are coming out on the good end of it. We stuck by Pat when we were down years ago and right now everybody wants what we got.

“I’ve known Pat for at least 30 years and we’ve had our ups and downs the last five years,” Smith continued on a personal level. “He knows I’m a little bit of a hothead, but we always work it out. We always talk it out. There’s been things that I wasn’t happy that he did. I’m sure there’s things I’ve done that he didn’t like, but you’ve got to be able to talk that situation out and try to move forward and do the best for both of you, and I think we’ve done a good job of that.”

In addition to the standout performances of Smith and Al Balooshi last weekend, a host of other Musi customers made their way to final rounds. Hot off his win at the Battle of the Engine Builders at GALOT Motorsports Park, Tommy Franklin took another win home to Fredericksburg, Virginia, this time at the Extreme Outlaw Pro Mod/Super Chevy Showdown at Virginia Motorsports Park. Several heavy hitters entered the event, including Jay Cox and Lizzy Musi. Franklin got by first round when John Camp turned on the red light, then his 950 cubic inch Musi engine returned to its incredible consistency in the eighth-mile, going 3.77 to take out Randy Perkinson’s 4.05 in the semis and then 3.76 to Cox’s slowing 4.26 in the finals. “We started out struggling to get our power to the ground, but my crew and I came together and were able to put together a couple of nice runs, showing off our Musi power by running speeds of 202-plus MPH,” stated Franklin.

Also at Virginia Motorsports Park, Mason “Bootie” Harris won the Super Chevy Top Sportsman category with a 582 cubic inch Musi sportsman engine. Another win came for Tim Savell and the Bankston Boyz, who took home the 15th Annual NMCA Muscle Car Nationals trophy from Bowling Green, Kentucky. In addition, the all-new Musi ProCharger setup has proven to be a very effective one for sportsman racers, as Jimmy Sackuvich took the combination to a runner-up finish in Top Dragster at the Throwdown in T-Town at Osage Casino Tulsa Raceway Park in Tulsa, Oklahoma.

“Pat’s customer service is second to none and the on-track results speak for themselves,” Jim Sackuvich said of the engine builder for his son’s dragster as well as his own Pro Nitrous ’68 Camaro. “At first, he was very hesitant about doing the ProCharger project, but after it all came together we knew it was a great decision,” Jimmy Sackuvich added. “I believe Pat’s influence on the sport is truly unparalleled right now. From Pro Nitrous to bracket racing, he has it covered!”