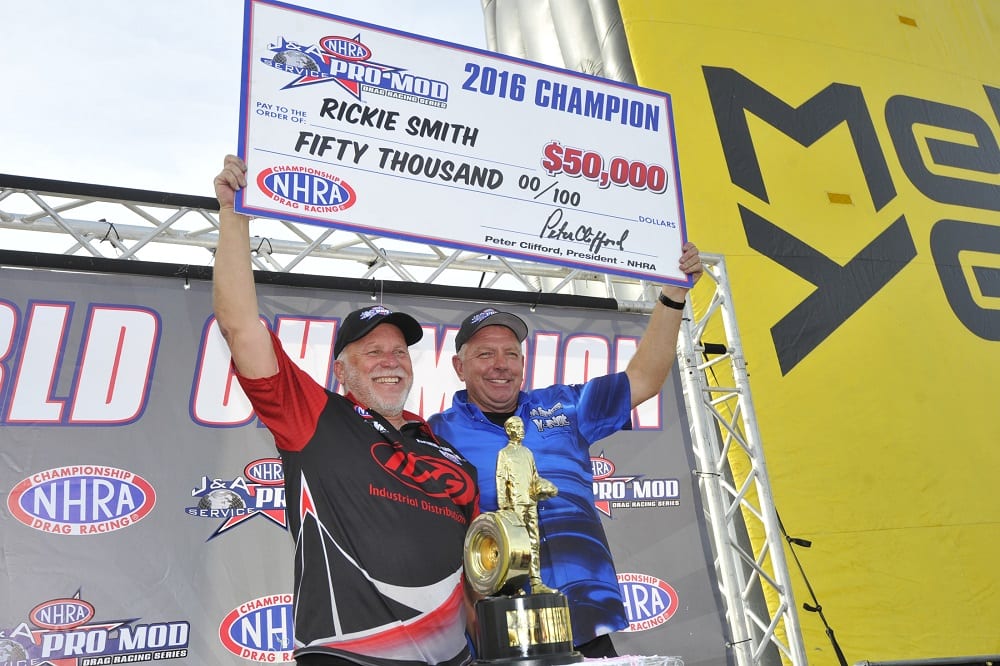 Smith, who won the NHRA J&A Service Pro Mod Drag Racing Series championship in 2013 and 2014, raced to a strong start of the season to propel himself to the series crown. In his IDG ’15 Camaro he opened the season with a win at the Amalie Motor Oil NHRA Gatornational in Gainesville, Fla., defeating Danny Rowe in the finals. He raced to a runner up finish at the next event in Houston and won the third race of the season at Atlanta. He most recently raced to a runner-up finish in St. Louis. He was also the No. 1 qualifier at two events.

“We only have 10 races and when you only have 10 races you can’t get behind as it is hard to catch up,” said Smith. “Luckily, we got off to a heck of a run this year. We went to three finals and won two of them and that got us a good cushion. We kept making rounds and just trying to be consistent on Sunday.

“I was going to retire three years ago because I was ready. But you hate to quit when you are winning and doing this good. I know I’m going to have to quit one day but you can always quit, but you can’t always keep winning.”

Eliminations for the race will take place on Sunday and Smith who qualified seventh with a pass of 5.909 seconds at 245.00 will face Danny Rowe in the first round.

Sidnei Frigo was the No. 1 qualifier for the event with his run of 5.829 seconds at 250.92 mph. This was his second No. 1 qualifying position of the season. He will face Jim Whitely in the first round.