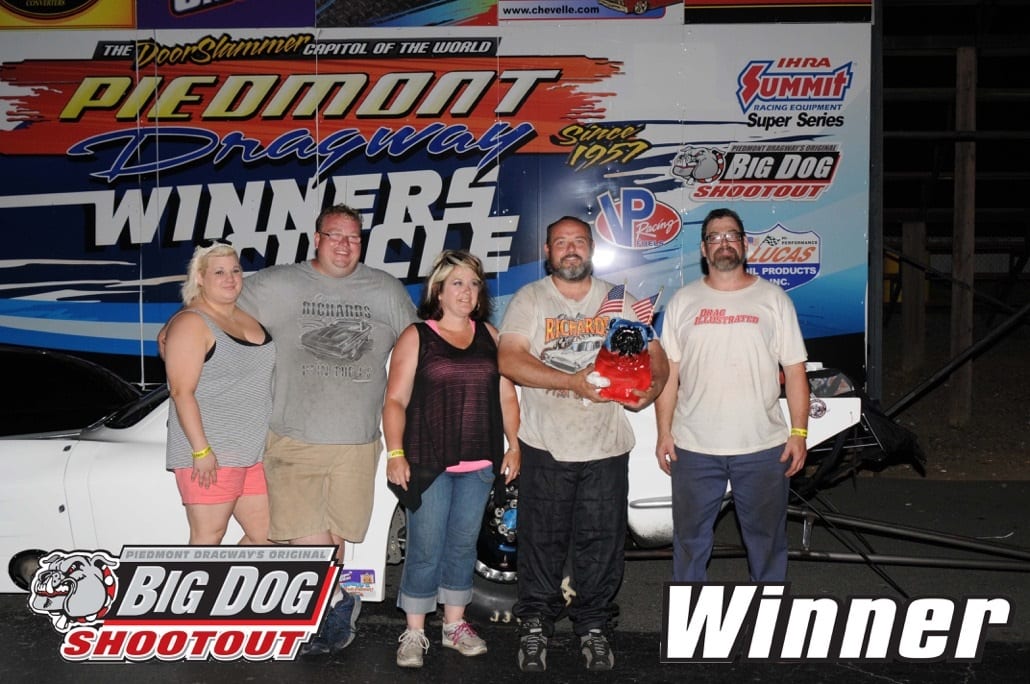 With the 20th anniversary of the Big Dog Shootout being celebrated over this July 4th weekend, the much-anticipated Power Jam was completed on Saturday at historic Piedmont Dragway; “The Doorslammer Capital of the World”. The track, in continuous operation since 1957, did not disappoint as drivers in the Big Dog Shootout and the Extreme Outlaw Pro Mod (EOPM) combo event took a shot at the track with hot, slick conditions prevalent on the day. When the dust settled, it was last month’s winner, Ronnie Gardner in the Jack Gaddy Camaro, on the pole in Big Dog and second generation driver, Ty Tutterow, on the pole for the EOPM part of the event.

In Big Dog, the qualifiers were chasing Gardner’s 4.08 down to number eight qualifier Marvin Graham. Tim Siler came in at number two with Charles Richards at third, and John Lassiter at fourth. Other competitors included Larry Pearce, a winner already this year, Cam Clark, and Tim Lawrence. Breakage advanced Lassiter and Siler to the semis with Lassiter using a 4.10 to go to the finals. Charles Richards Jr. ran a 4.08 to advance on the other side. In the final, Richards Jr. defeated Lassiter by a whopping .0006 margin of victory. 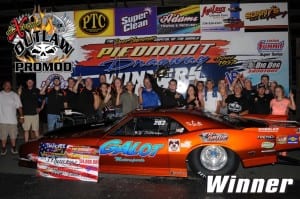 In the Extreme Outlaw Pro Mod portion of the program, Jamie Chappell was the number one qualifier until the second round when Ty Tutterow rolled to the line and used father Todd’s tune-up to go to the pole with a 3.845 ET. Ty also added top MPH at 196.42. Others in the field included Brian Schrader, Robbie Keziah, Jamie Chappell, Chris Patrick with tuning help from Jay Cox, Tommy Mauney, Derrick Brown in the ex-Victor Cagnazzi Pro Stock car, and Randy Weatherford. The semis were as follows: Tutterow ran another 3.84 to defeat Chappell and Robbie Keziah advanced over Brian Shchrader. This set the final with young Mr. Tutterow saving the best for last, laying down a 3.83 to defeat Keziah’s 3.95. Congratulations to the whole Tutterow gang for Ty’s first, and surely not his last.

Celebrating the 20th anniversary were such drivers as Terry Brackett, the first in the four-second range with a 3,000-pound Camaro with Fulton 632 power, as well as Buzz Varner, Morris Mitchell, Rocky Raynor, Rick Moore, Todd Tutterow, Michale “Golfball” Godfrey, Matt Giangrande, Bubba Turner, Randy Weatherford, Joel Douglas, Ronnie Gardner, John Lassiter, Travis Harvey, Jack Gaddy, Andy Beal, Jamie Chappell, Charles Richards Jr. All in all, over 30 drivers came out to be recognized along with the founder of the “Longest Running Single-Track Series in the Country”, Mr. Jim Turner. If you weren’t there, you were missed, and please come to any upcoming event that you may be able to attend.

All in all, a great day and a great opportunity to be a part of history. Make sure to attend the next installment of the Big Dog Shootout at historic Piedmont Dragway.