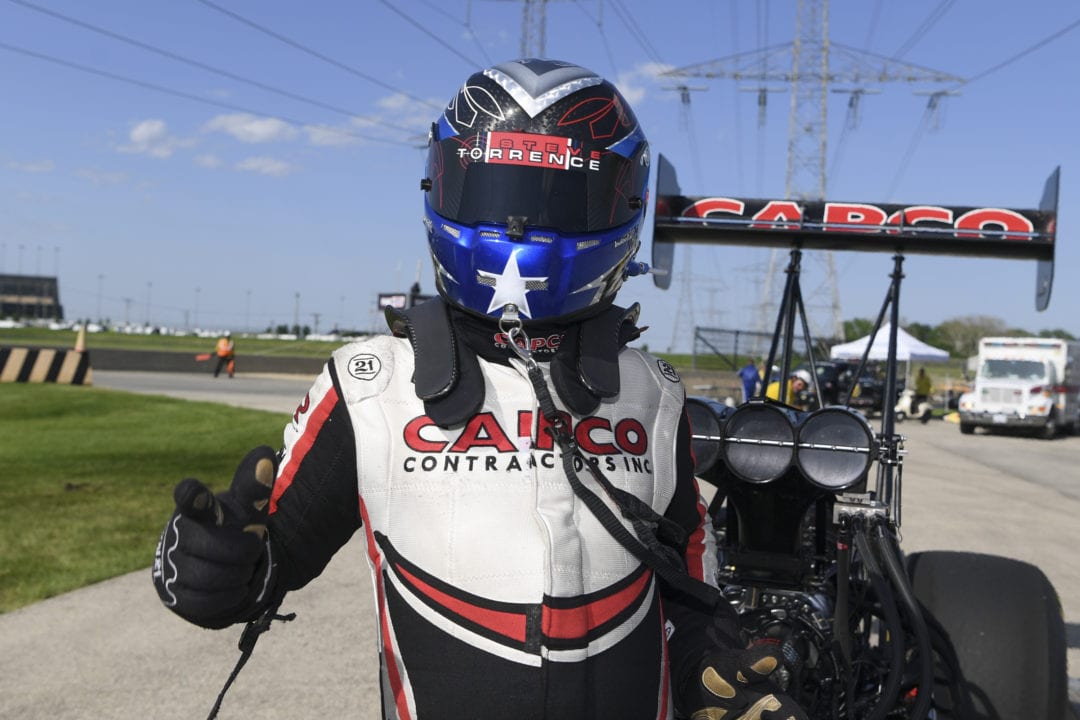 Back when Steve Torrence started racing in Top Fuel, he was happy with just getting his first victory.

Now, the defending world champion is simply running out of space for all the trophies. He won his fourth straight race of the year, his 10th in his last 15 starts and 23rd in his past 52 races. It’s history-making numbers and all of it still seems surreal for the Texan.

“This place (Route 66 Raceway) is great, but it was hot, it was humid, it was a little tricky to navigate and they did an exceptional job,” Torrence said. “I was told we’re 22-4 in final rounds (the last three seasons), that’s pretty surreal. But, if you had told me seven years ago that I’d have 31 race wins how, I’d say you were full of crap. When I started out, I just wanted one.”

One is a far, far distant memory, as Torrence simply wins no matter the conditions. He’s won in perfect conditions, he’s won in warm conditions – like all of these last four – but he’s been incredibly consistent. In Chicago, he polished off Terry McMillen, Richie Crampton, Antron Brown and Mike Salinas, going 3.763 at 326.32 mph in the final round.

Torrence is already in the midst of one of the greatest stretches in Top Fuel HISTORY. The only question now is how much more can he add to these already otherworldly numbers.

“I’ve got a really good team; a really good group of guys,” Torrence said. “I know I say it time and time again but they are the reason for the success that we have. When you see teams that go out and do well and continually win, it’s guys that have been together for years and they just work well together and that’s what we have.”

JOHNSON BREAKS THROUGH IN FUNNY CAR: Tommy Johnson Jr. had been a model of consistency over the last couple years. He had some things to show for it – including a third-place finish in Funny Car last year – but there was one major thing missing: a win.

There’s no doubt it had started to wear on the likeable veteran, but it’s not something he has to worry about now – at least for a while.

Johnson broke a winless streak that dated back to 2017, finally seeing that consistency all the way through. He beat points leader Robert Hight in the final round with a 4.175 at 229.86 as his engine exploded crossing the finish line.

That carnage, though, was the last thing on his mind as the win came within reach.

“I felt it (the car) start spinning the tires and I didn’t see him (opponent Hight), and it’s been a long time since I’ve won, so I was going to leg it to the lights, I didn’t care,” Johnson said. “We were going to get that win. I’m just happy for everyone – Make-A-Wish, Mopar, Hangsterfers, our new partner Okuma.

“It makes your heart stop for a second because you’re sitting there coasting and you know he’s (Hight) got to be there somewhere. It’s the longest coasting you’ve ever done in your life. You’re thinking ‘come on, get there,’ and then I saw the light come on and I was just so thrilled for the guys and (team sponsor) Doug Chandler. We’ve been close a lot – seven times we were there in the final and couldn’t get it done so it was nice to finally do that. You keep trying to get these wins and you come up short, and you come up short, but you keep fighting. I can’t thank my guys enough. They’ve done a great job.”

KRAMER KEEPS KB ROLLING: It wasn’t Bo Butner, but KB Racing kept right on rolling on Pro Stock. This whole KB Racing vs. Elite Motorsports rivalry brewing in the class is starting to get pretty darn exciting as well, even if KB has ruled the start of the season.

Butner won four of the first five races of the year before going out in the second round. Kramer, meanwhile, was the Elite killer, dispatching four Elite drivers during eliminations, including a Sunday-best 6.532 at 210.70 in the final round over a red-lighting Erica Enders.

“As a KB Racing-powered car, it was really cool to take out all Elite cars on raceday in our American Ethanol Chevrolet Camaro,” Kramer said. “Pro Stock is a tough category and you really can’t make any mistakes. Since our win in Brainerd last year, we’ve made little mistakes and I finally feel like we’ve got our racecar back.”

MATT SMITH STOPS THE HARLEY TRAIN: It was an uncharacteristically rough weekend for the Harley-Davidson team of Andrew Hines and Eddie Krawiec in Chicago, and Matt Smith was the one to take advantage.

The defending Pro Stock Motorcycle world champ picked up his first win of the season, going 6.807 at 198.88 to beat Karen Stoffer.

“Our Red Rocket showed up,” said M. Smith. “This DENSO Spark Plugs motorcycle was on kill today. We made a little blooper second round and slowed up just a little bit, but all in all, we were the quickest bike every round today. I can’t say enough about my guys, my crew, Angie, everybody who helps us. We had a good day.”

WINDY CITY WRECKAGE: There was some major Chicago carnage over the weekend, and we’ve got the videos and photos (later) to prove it.

First up, Pro Stock Motorcycle rookie Jianna Salinas got her first career round win to open eliminations before things went awry in a wild way a round later.

Salinas got dumped off the bike, and the motorcycle went flying. Luckily, it missed her and Salinas remarkably won on her feet almost immediately. A pretty impressive effort on her part and there’s no doubt she’ll be back and ready to compete very soon.

Top Alcohol Funny Car driver Andy Bohl had a huge crash the night before, slamming into both wall before emerging uninjured. He was almost catapulted off of one wall in a wild series of events, but the good news is there were no major injuries.

Check out the pictures down below to see things get a little hairy for Leah Pritchett and Shawn Langdon as well over the weekend.

DEFINITION OF HARD WORK: Leah Pritchett and her team had a nasty ordeal when her right rear tire exploded during eliminations. But less than 24 hours, her team was already back to work.

Wasting zero time. The guys got the car back from Chicago, stripped, checked on chassis jig and ready for repairs in less than 20 hours after that first round, with new @tms_titanium shields in the making. @shoeracing #TF4 #mondaygrind #andweld @lincolnelectric

This win is for you, Terry. 💙@TommyJohnson_Jr and the team proudly carry coordinates of a star purchased in Terry’s memory by @MakeAWish St. Louis with each run he makes on his @Dodge Hellcat. This is his first victory since the coordinates were added to his Funny Car. pic.twitter.com/6OO5HnDk1W

With her win at the #Route66Nats @rockitt_shipp ties @meganmeyer.racing for most wins by a woman in the @lucasoilproducts Series, with 7 wins.

OUCH!
For Landgon and Pritchett

Right rear tire delete option is nottttt what we selected, but its what we got first round of eliminations Sunday. Swipe ⬅️. An anomaly driveline failure instantly shot the engine to 10,500rpm, she exploded, blower went askewww, and a flying part punctured the tire sending rubber bits into orbit as I fought to keep our car off the wall at 250+mph. Incredibly grateful for my crew, fab shop guys, and extended DSR help that constantly work to make sure these cars are as safe as possible when things go south. Fast. A negative 10g force hit in a tenth of a second can be a lot while trying not to be a crash on 3 wheels, but nothing compared to what it could have been if it let loose farther down track. Thank you everyone that plays a part in developing the car and driver safety mechanisms that most don’t know about and rarely get used, but are much appreciated. #carstoreup #imalright #thankful #theblowerisaskewwwww #thatsnotwhatyouwant #thatsuhhhhgonnaleaveamark #dashdontsayhooniganfornuthin #armmusclesfinallygoodforsomething #butmanwestillcouldawonmaybe #route66nats #tf4

A WELCOME SIGHT IN PRO STOCK

👀 What’s that we see on the front of Richard Freeman’s Pro Stock car? 🐎

Huge thanks to the @whitesox for having us out! ⚾️ pic.twitter.com/DYqhj67jTk

ALL ABOUT THE FANS

A DAY AT THE OFFICE

Step into my office.

FINAL WORD
These stretches tend to go by in a blur. Before you know it, this four-race stretch is done, the Western Swing is wrapped up and we’re wondering what happened to the year. So let’s enjoy all the accomplishments that are taking place before our eyes, no matter the class. Steve Torrence is on another level – like an all-time historic level – and that needs to be recognized as much as possible. Division 4 winning the JEGS Allstars for a second straight year is pretty outstanding, as is Randi Lyn Shipp winning for the seventh time – the most in NHRA sportsman history for a female – in Stock Eliminator. Talk to you after Topeka!