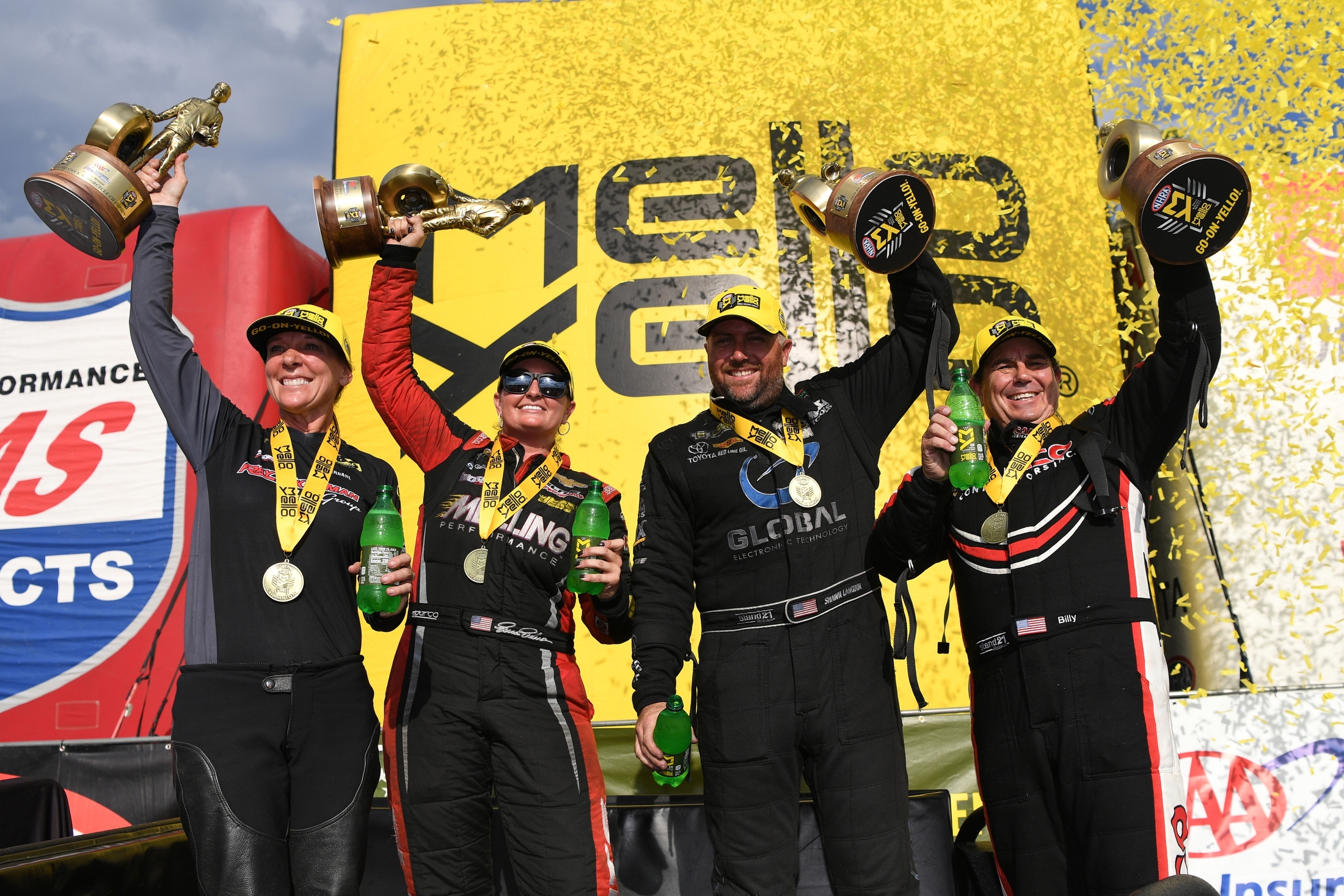 For those wanting a championship race going down to the wire in at least three – and possibly all four – NHRA professional classes, this weekend was like catnip.

There appears there will be no dominant run to the title this year in the Countdown to the Championship, at least not like what Steve Torrence and, to a lesser degree, Tanner Gray did a year ago. Of course, things could change quickly. Andrew Hines could put something together in Charlotte, extend his points lead and roll the rest of the way.

The same goes for Robert Hight, but there’s a lot of wild action going on there, including Sunday’s all-Kalitta matchup between Shawn Langdon and J.R. Todd.

As for Top Fuel, Torrence is lurking again, trailing Doug Kalitta by just two points. The likely bet is he turns it on down the stretch, but it’s already no repeat of a year ago. His dad, Billy, beat him in St Louis and Steve is still after his first Countdown win in 2019. He already had two by this time, but Steve will have his work cut out for him if he wants a second straight championship.

The Pro Stock race also tightened, as Erica Enders put it all together, winning for the first time in more than a year. Her team has been red-hot over the past few races, possibly setting up another duel with Jason Line. If anyone remembers their thrilling back-and-forth during the stretch run the 2014 season, we’ll all gladly sign up for that again. Line currently has an 11-point advantage on Enders heading to Charlotte.

Karen Stoffer shocked us all in St. Louis, winning for the first time in FOUR years, beating Hines in the final round. It could just be delaying the inevitable after Hines’ dominant regular season, but Stoffer and Jerry Savoie’s wins to open the playoffs has at least made things interesting – which is all we want.

Langdon returned to the penthouse this weekend after a slow start in Reading. He’s still 80 points behind Hight, but there’s a strong contingent of drivers still in the mix there, too. Todd beat Hight and John Force to reach the final round against his good buddy, while Langdon came through with a run of 4.068-seconds at 310.41 mph to win.

“Any time you can get a win in the Funny Car class it builds momentum, especially early,” Langdon said. “From the situation we were in, starting the Countdown in ninth-place, there’s not a lot of room for error. Then just having a bad race in Reading and dropping to tenth, we had to make some big changes for St. Louis because if we don’t make the finals we aren’t going to have a shot.”

Langdon now has a shot and thanks to a wild weekend in St. Louis, so do a lot of people.

We’ve had eight different winners and 16 different finalists through two playoff races, which is music to the NHRA’s ears – and a sign that things could get even more crazy by the time we end up in Pomona.

DAD TORRENCE GETS SOME REVENGE: Dad has bragging rights this time. Billy Torrence beat defending world champ Steve in the final round on Sunday, going 3.835 at 319.67  to bring their final round record to 1-1.

It’s a special deal – the only other father-son final round has been Connie and the late Scott Kalitta – so both treasured that.

But as Billy cut up the media room after the win, Steve knew what was coming.

“I’m sure I’m gonna hear it from my dad on the way back home,” he predicted. “I guess we’re gonna have to do this again sometime to break the tie.”

Steve predicted correctly, but it was all in good fun. In the end, it was mission accomplished for the Torrence family after the struggles in Reading.

“To get to race Steve in the final was the goal,” he said. “We came here and we watched how we qualified and (then) we did what we needed to do to stay on opposite sides of ladder and it came out good. It came out better for me, but it’s good to get one on the kid every now and then.”

WAITING IS OVER FOR ENDERS: The wait is over and after a dominant weekend in St. Louis, Erica Enders is rolling at the perfect time.

The two-time Pro Stock world champ qualified No. 1 and raced to the NHRA Midwest Nationals win at World Wide Technology Raceway on Sunday, going 6.598-seconds at 208.36 mph in her Melling Performance/Elite Motorsports Camaro to slip past Matt Hartford’s 6.621 at 207.30 in the final round.

It gave Enders her first victory since her four-wide win in Charlotte last year, putting the team in prime position to compete for another world title following the second of six NHRA Countdown to the Championship playoff races.

STOFFER CARRIES SUZUKI BANNER: Karen Stoffer wasn’t supposed to be racing this year. Now, she’s right in the thick of the championship hunt. Stoffer knocked off all the big hitters in St. Louis, going 6.869 at 197.74 to beat points leader Andrew Hines in the final, jumping all the way to second in points.

Suzuki has taken its share of licks in the class in recent years, but Stoffer provided a glimmer of hope. As for a championship, she isn’t worried because this season wasn’t supposed to go like this in the first place.

“I really don’t feel the pressure out there because every team is phenomenal,” Stoffer said. “I listened to the team and did what I had been doing. We had Matt, and then Eddie and then we had Andrew. Out of all the heavy hitters, those are it. We just went out and did our job. The Suzuki platform definitely went through some challenges and we’re not one of those high-budget teams, but we have fun. It’s been a long time (since her last win), and I wasn’t even scheduled to race this year, and here we are in the top 10 and winning a race in the Countdown.”

TRICKY RICKIE GETS IT DONE: Guess that nitrous car isn’t a bad choice after all, Rickie? The nitrous Camaro has been dynamite the last two races, qualifying No. 1 at back-to-back events and going to two straight finals.

In St. Louis, Smith went a step further, grabbing his 15th career win and first this year by going 5.768 at 252.19 in the final round against Stevie “Fast” Jackson.

It denied Jackson a chance for an incredible eight days following his RvW win at the Shakedown, but Jackson likely gets the last laugh this year. He stretched his points lead to 156 and he should clinch in a couple weeks in Charlotte. Talk about an amazing season.

Smith, though, has impressed down the stretch. One wonders what might have been had he just stuck with his traditional nitrous ride the whole year. The turbo experiment was a flop, and the nitrous car clearly haven’t been at the disadvantage that he loudly suggested earlier this year.

DRIVE IT BACK: Easily the best thing you’ll see on the Internet today.

FORCE NOT GOING AWAY: He didn’t get it done on raceday, but John Force is well within reach of a 17th world title. His team has performed as well as anyone lately, and Force always has something special this time of year.

.@JohnForce_FC took home the No. 1 qualifier for the fourth time this season at the @AAAMissouri #MidwestNats.

Can he pick up another Wally? Catch a qualifying recap at 1p ET on FS1 followed by eliminations at 2p ET. pic.twitter.com/wAVdQrkaAG

ALL KINDS OF CARNAGE: This weekend wasn’t for the faint of heart. We had Lex Joon with a massive fireball, Tim Wilkerson’s body going airborne and Rick Hord walking away from a really scary crash.
Wilkerson somehow came back from his explosion and won his first-round matchup, and was competitive a round later.
Hord obviously wasn’t able to race, but the good news was he escaped any major injuries. It’s been a rough go of it for Pro Mod drivers this year, so let’s hope Hord’s nasty blowup and crash was the last of it in 2019.

FACTORY STOCK SHOWDOWN: This one was a doozy! Dave Kramer grabbed the win over Arthur Kohn for the Wally! Kramer was perfect .000 on the tree and this is his first win in the category. ‬ ‪

BIG TIME CROWD
St. Louis showed up and showed out – again. Fourth straight year for a sellout crowd on a Saturday. St. Louis is as good as it gets when it comes to drag racing fans in the Midwest.

CARNAGE, PART TWO: Glad to see Allan Middendorf was okay after this rough ride into the sand trap at the Funny Car Chaos event in Texas.

FLASHBACK
Gary Scelzi is the only driver to win in both TF and FC in St. Louis – that is until Langdon unleashed things on Sunday. Pretty cool seeing nitro at night in eliminations (there was a lengthy rain delay). But, man, look at that crowd (still there in St. Louis these days, mind you) and those header flames at night in the championship round.

Throwing it back to 2004 when @Gary_Scelzi took home the win in Funny Car over John Force and became the first driver to win in both nitro classes at St. Louis.

CREW VIBES
Some serious “cool” in this one.

TWO PAWS UP
This guy stole the show this weekend. At least he enjoyed his first nitro experience.

It was a pawfect @NHRA weekend. Made lots of new friends and gave even more puppy kisses. #NHRA #NHRACountdown #MidwestNats #Racing4STL pic.twitter.com/Kkxdj7z5jF

Guess what’s back this weekend?!