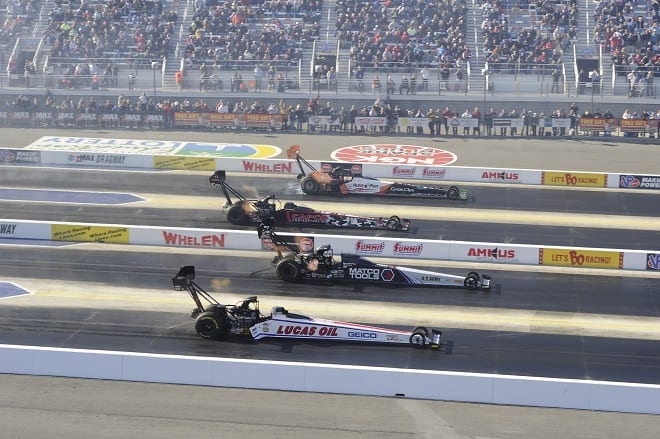 When racetrack mogul Bruton Smith built a four-laned dragstrip in Concord, North Carolina, right next to his Charlotte Motor Speedway, few thought the idea of a four-wide national event would take off. The event is still around, and this weekend the fan attendance and performances at the 6th Annual NHRA Four-Wide Nationals were better than ever. Rain forced officials to cancel Friday’s qualifying action, but the chilly temperatures that followed resulted in record numbers. By the end of the weekend, former world champions reached their first winner’s circles of the season, and one of the most beloved Pro Stock competitors scored his first wally since 2009.

The smoke has cleared, the trophies have been presented and the teams are already on their way home to prepare for the next race. It’s time to break down the best and worst moments from the NHRA Four-Wide Nationals. 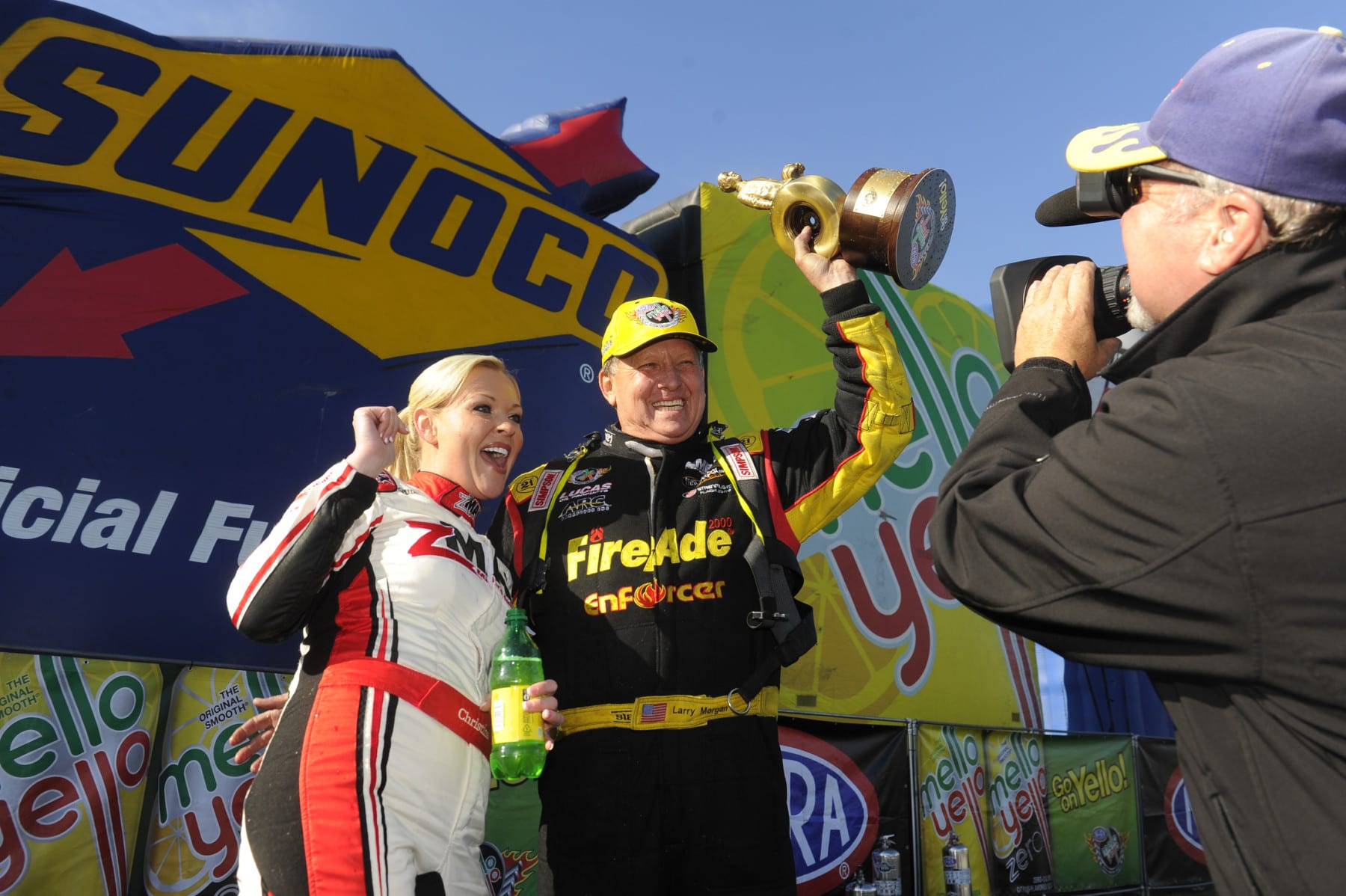 Even before he took to the track for the first pass of 2015 earlier this year, fans of Pro Stock racing knew Larry Morgan would return to the winner’s circle soon after switching from a Ford Mustang with in-house power to a Chevrolet Camaro with Gray Motorsports engines over the offseason. Man and machine performed flawlessly in the final quad when Morgan unleashed a 6.464 elapsed time. Coupled with a .006 reaction time, the class veteran easily dispatched Greg Anderson, Jonathan Gray and Vincent Nobile in the all-Camaro final round.

We would typically list separate “best event performances” for professional racers and sportsman competitors, but it’s safe to say Top Alcohol Funny Car driver Jonnie Lindberg’s Four-Wide Nationals performance was the most impressive of any racer on the property. The Swedish driver became the first TA/FC driver in the 270 MPH zone on the first qualifying run and came back on the second and final session to knock the alcohol racing world on its head, running 5.361 at 272.10 MPH – the first TA/FC in the 5.3s by a bunch. He backed it up for the national record with a 5.381 at 270.64 MPH in the second round. The 2013 FIA TM/FC champion went on to win the event, beating the defending national champion, Steve Harker, in the final with a 5.406 elapsed time.

Most folks on the grounds assumed reigning Pro Stock world champion Erica Enders-Stevens and her Elite Motorsports team would really make the most of the rare conditions, but the powerhouse team actually struggled. Enders-Stevens seemed to be one of the racers most hurt by the shortened qualifying, as she failed to make it to the finish line on both qualifying attempts. When a 6.521 at 214 MPH showed up on her scoreboard first round it seemed the gremlins were gone, but the traction problems reappeared in the second round. 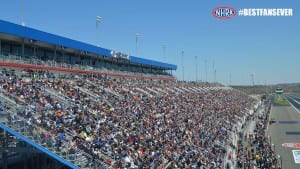 The four-wide critics were plenty vocal with their opinions about the race, but it’s hard to argue with the tens of thousands of fans who came out to zMax Dragway despite unseasonably cold temperatures on Saturday and Sunday. It was announced by mid-afternoon on Saturday that the day was officially sold out, an impressive feat when you consider the seating capacity of the “Bellagio of Dragstrips”. While not completely booked up on race day, the crowd was strong for a part of the country that reserves Sunday for church-going and circle-track racing. 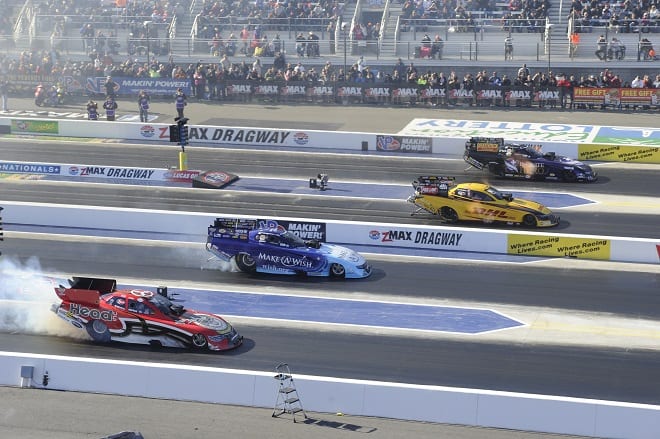 This was the sixth running of the Four-Wide Nationals, yet the drivers, teams and even announcers were confused at times. Drivers had issues deciding who was pre-staged or staged, crew members didn’t know whether to celebrate or get ready to pack up, and sometimes the announcers and ESPN analysts struggled to completely and correctly broadcast what was happening on the track. If professionals with six years of four-wide experience are still trying to adapt to the unique situation, it really makes you consider what the first-time fans at this race thought about the whole deal. 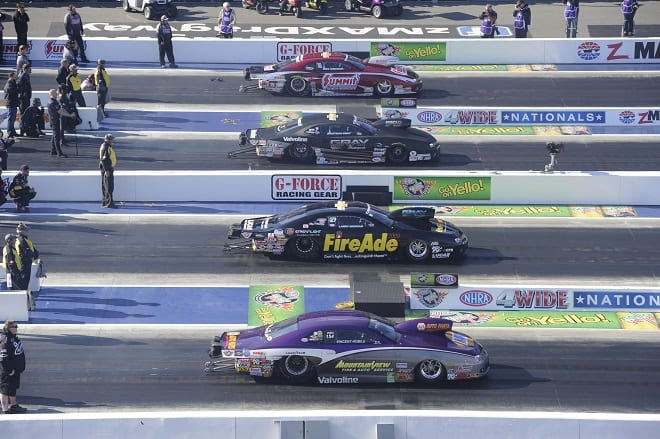 The factory hot rods were ripping off career-bests and even national records throughout eliminations on Sunday. The first quad of the first round set the tone for the day when Allen Johnson ran a 6.462, the quickest run in history at the time, and still lost to two other cars! Two pairs later, Jason Line bettered the record with a 6.455 ET, backed up by a previous run. Each of the three rounds of eliminations had at least two 6.4-second elapsed times, and the final even had three with Larry Morgan (6.464), Greg Anderson (6.475) and Jonathan Gray (6.508). Anderson almost nabbed the speed record, missing the 215.55 mark by just .07 MPH.