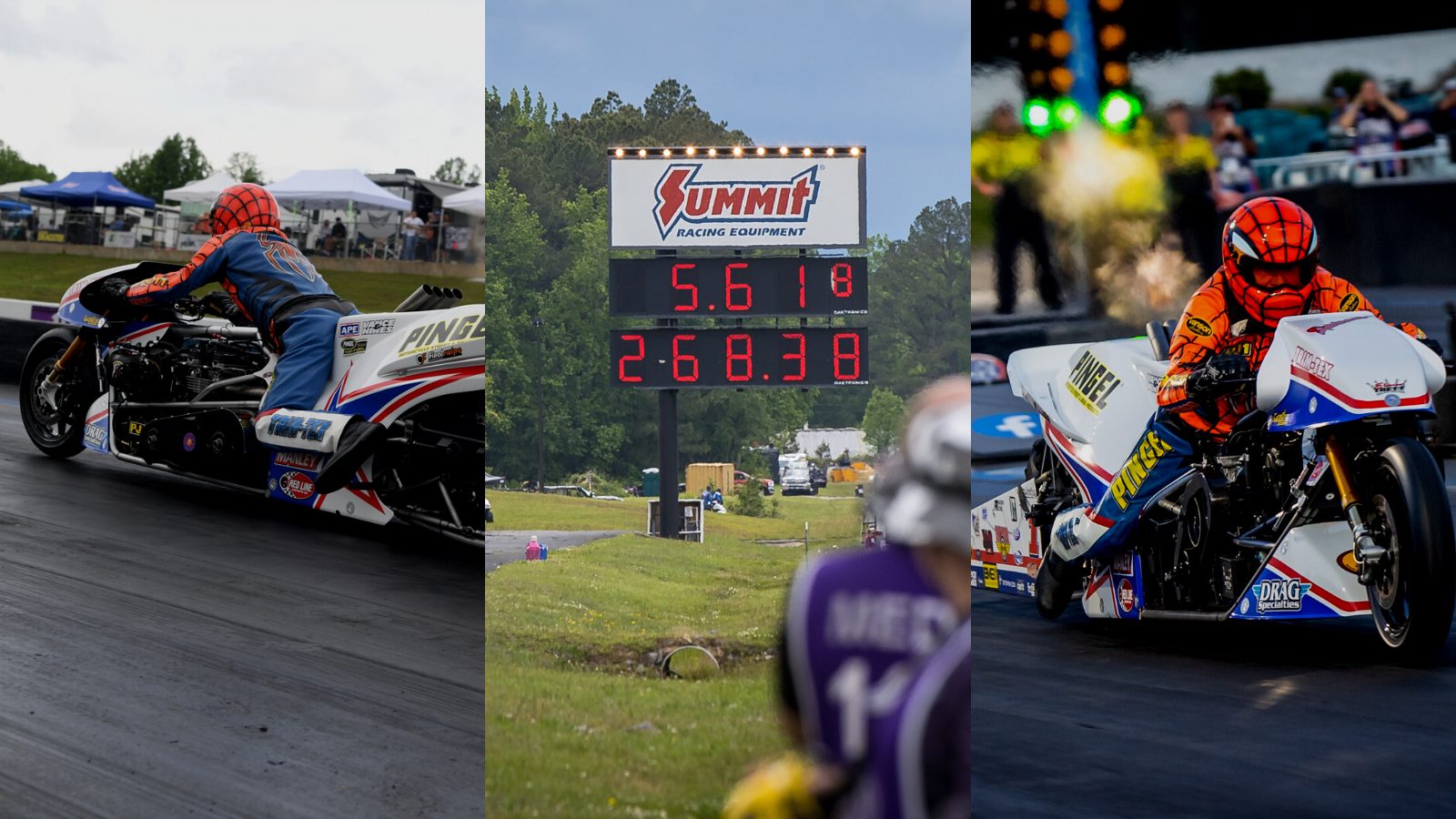 It’s happening all around us, all around the world, all the time. People latching onto social issues, injustices and tragedies (unfortunately, an all too often occurrence) and clamoring for change, or at the bare minimum acknowledgement of the issue(s).

It’s these big issues and the stories associated with them that light a fire in the belly of the public.

I’m not old enough to have been alive when U.S. astronauts planted the American Flag on the Moon during the Apollo 11 mission in 1969, but I cannot imagine how proud I would have been at that moment. Hell, I’m proud of it fifty-three years after the fact.

I’m still dissecting the “why”, but it feels like the drag racing community is having an Apollo 11 moment after this past weekend’s rain-hampered NHRA Virginia Nationals at Virginia Motorsports Park. For my two cents, I think it’s sheer admiration and respect for the intestinal fortitude demonstrated by Larry “Spiderman” McBride this past weekend when the motorcycle drag racing legend cracked off a jaw-dropping 5.61-second, 268.38 mph blast on Saturday – the fastest motorcycle pass in drag racing history.

Surely the fact that he broke his own record (previously McBride went 265.95 mph at South Georgia Motorsports Park in the fall of 2021) and did it at his home track in Virginia added to the emotion and enthusiasm surrounding the milestone drag racing moment, but the outpouring of support across the industry hits different. I’ve seen posts across social media from radial tire guys, nostalgia nitro guys, Pro Mod guys and a slew of NHRA pros. Hell, reigning Top Fuel champion Steve Torrence was almost falling down as he scrambled to get a good angle of the run.

McBride, 64, received a standing ovation from the impressive crowd on hand at Virginia Motorsports Park when interviewed on the starting line by Joe Castello on Sunday. After the run on Saturday when the NHRA communications department brought “Spiderman” to the media center on the first floor of the tower at VMP, he was met with cheers and real, honest engagement from the press. By all accounts, McBride’s nearly 270 mph lap was the highlight of the entire weekend.

Speaking of the media center, McBride actually admitted that he pedaled his Top Fuel bike during the historic run and if given another attempt that night likely could have cracked the 270 mph barrier (and then some). He also pointed to a literal who’s who of drag racing royalty that contributed to the moment, which, in my opinion, also contributes to the excitement that continues to surround the pass.

“We’ve had a lot of help from people like Bobby Lagana, Bill Miller Engineering, and David Grubnic,” said McBride. “We’ve had a lot of people who have pitched in to help us a little bit to get the thing calmed down enough so we wouldn’t blow the tire off and we could put on the show we were brought here to do.”

Lagana? Bill Miller? David Grubnic? These are nitro tuning legends. How awesome is it that these guys who, obviously, have plenty on their collective plates, are investing time and energy in the success of another racer? Personally, I think it’s amazing, inspiring and reason No. 896 as to why drag racing is the greatest motorsport in the world (I’d argue greatest sport in the world).

So, anyway, I’m curious – when is the last time you’ve seen the drag racing community be so over-the-top excited and congratulatory about a single pass down the track? I’m thinking maybe Daniel Pharris’ 3.49-second run in Radial vs. World trim? I’d lump in Lyle Barnett’s first NHRA Pro Mod victory in Dallas last year, but that wasn’t a single run – it was an entire event. I think maybe we have to go back to Jason Scruggs’ legendary 200-plus eighth-mile run at Rockingham Dragway – the first in history for a doorslammer over that distance.

Regardless of what other moments are comparable, it’s worth noting that we’re part of a community that is capable of celebrating the success of others, and that makes me proud. For whatever reason, and I believe there are more than one, it sure feels like the entire sport of drag racing was riding with “Spiderman” when he went through the traps at Virginia Motorsports Park at 268.38 mph.