It’s been 30 years since John Mazzorana’s Northeast Outlaw Pro Mod Association started up, and their season opener at Maryland International Raceway over the weekend showed that the organization is as strong as ever. Over 20 cars showed up to help the series kick off its celebratory 30th season, and the race generated all kinds of highlights and storylines.

We’ve already covered perhaps the biggest storyline – defending series champion Mike Decker Jr. defeating his son, Mike Decker III, in the final round – but there were numerous other high points from the weekend that we wanted to mention.

Chuck Ulsch Rips Off a Number to Go #1 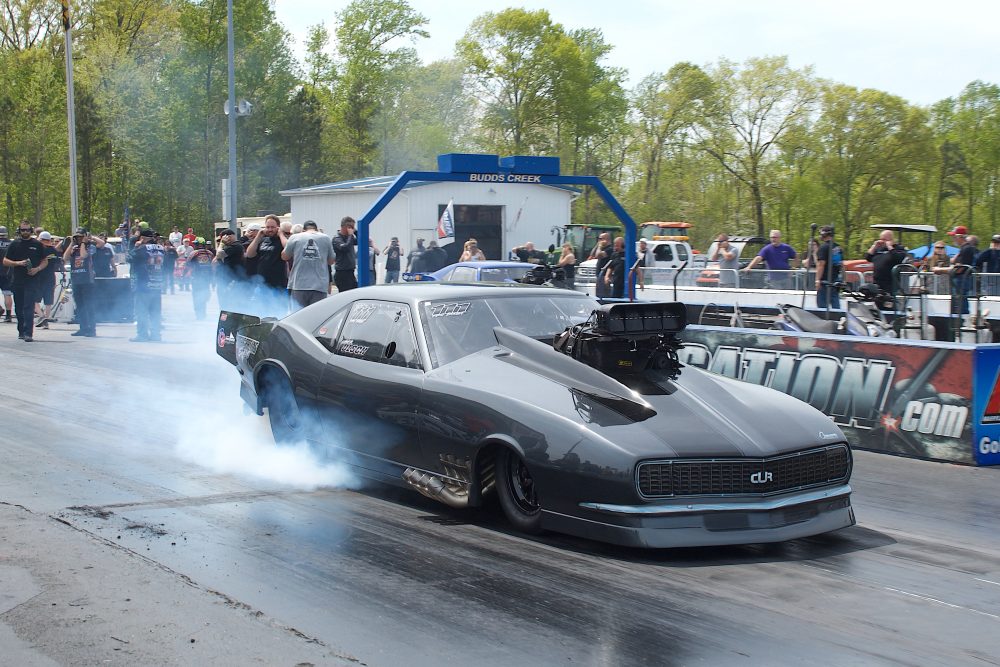 Former Outlaw 10.5 star Chuck Ulsch has had his fair share of highlights and big-time runs on both 10.5-inch tires and big, meaty Pro Mod slicks, but it’s safe to say he put the Pro Mod world on notice this weekend with his stout 3.61-second, 208.65 mph pass on Saturday. That run in his screw-blown ’68 Camaro moved him around Carl Stevens Jr., who had the No. 1 spot with a 3.613 going into the third and final qualifying session. You’d think the No. 1 spot and a front-running race car would give Ulsch a clear advantage in eliminations, but read on…

Shortly after running the final qualifying session, Ulsch and the rest of the 16-car qualified field rolled into eliminations Saturday night. The final pair of the round delivered a jaw-dropping result, as Ulsch lined up with former NEOPMA champion Steve King (feature image) in the screw-blown King/Pilot/Miller ’19 Corvette. King struggled in qualifying but returned to the team’s usual performance level just in time. He left the starting line first and ripped off a 3.621 at 211.16 to win on a holeshot over Ulsch’s consistent 3.617 at 209.36.

Longtime NEOPMA racer Nick Montana and his brother, Chris, have been working hard on a brand-new ’69 Camaro for the NEOPMA 30th anniversary season. After putting the finishing touches on the nitrous-fed hot rod, they brought it out to MIR for its maiden voyage. Montana posted a respectable 3.904 at 190.06 to qualify No. 11. Unfortunately, Montana’s weekend ended early when he sustained a crash in the final qualifying session. Fortunately, he wasn’t injured in the crash, but the same can’t be said for the car. Hopefully they’ll be able to get it patched up in time to bring it back out later this season.

Engine builder and driver Carl Stevens Jr., who won the 2018 World Series of Pro Mod, proved that he’s going to be a strong contender in NEOPMA competition this season in Jim Bell’s ProCharger-boosted ’69 Camaro. He qualified No. 2 with his 3.613-second blast, but parts breakage and an uncharacteristic slow reaction time in the opening round of eliminations put a stop to Stevens’ weekend. Series newcomer Joe Newsham won the pairing with a 3.879 to Stevens’ 3.849.

Pro Mod is Alive and Well

We’ve said this before, but Pro Mod as a whole is in such a good place. Despite PDRA racing in Kentucky and NHRA Pro Mod racing in Charlotte, the NEOPMA race attracted 21 cars. Another handful of cars intended on running the race, but weren’t able to attend due to issues getting parts in time. And the cars that showed up were solid players. Five drivers dipped into the 3.60-second zone, including Ulsch, Stevens, Decker III, Don Tolley, and Fredy Scriba. Another five drivers ran in the 3.70s.