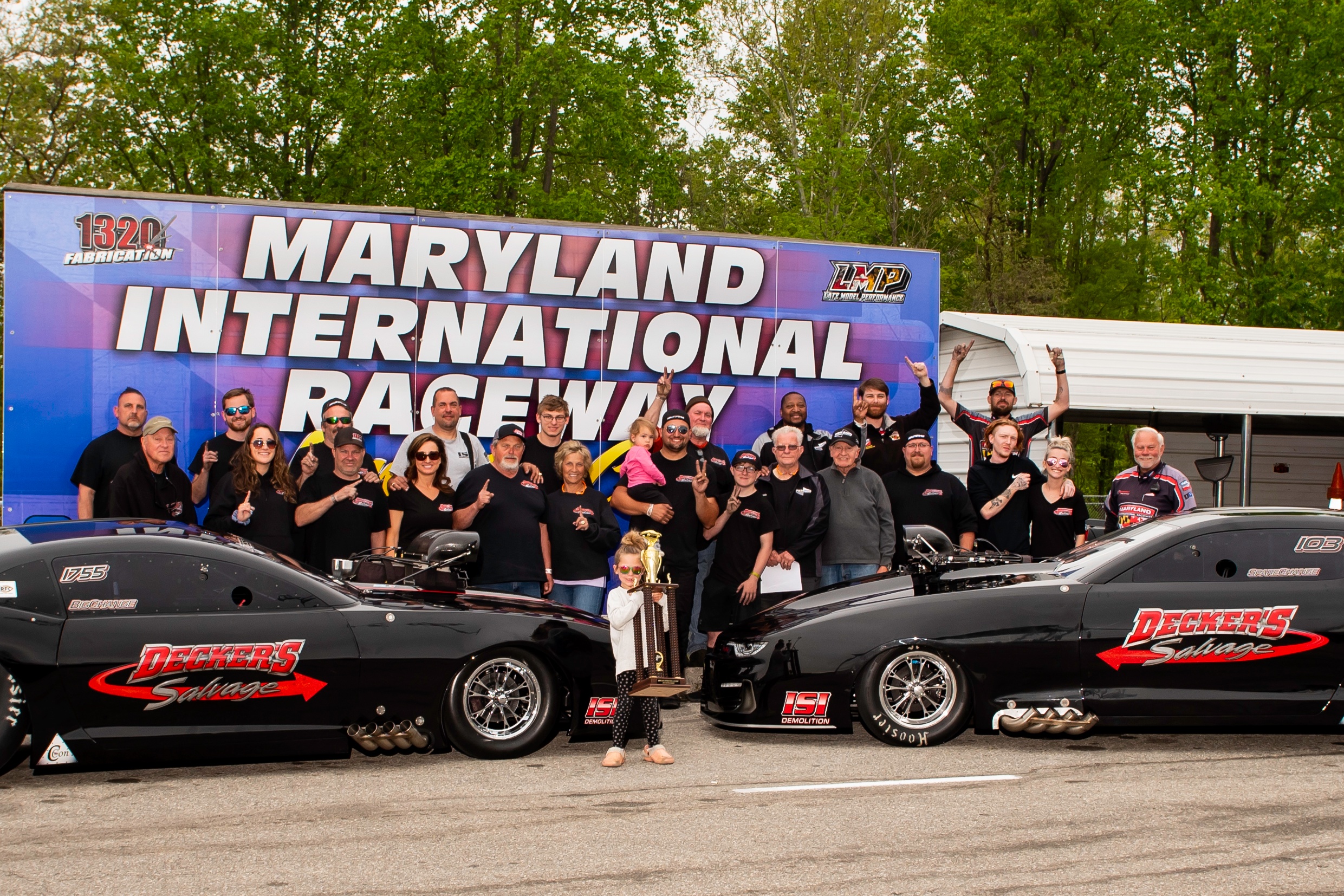 “We’ve lined up against each other before [in Outlaw 10.5], but we’ve never beaten the whole field before we got there,” Decker Jr. said. “It’s very exciting and it just doesn’t happen.”

The younger Decker was making his NEOPMA debut as the driver of the team’s second car, the screw-blown Decker’s Salvage “Spare Change” ’20 Camaro. He qualified third with a 3.637-second pass at 209.04, while Decker Jr. struggled in qualifying and started eliminations from the No. 13 spot with his 3.958 at 143.70.

“We ran 214 and a half mph on Thursday with my car, then after that we couldn’t put it all together,” Decker said. “That’s why we qualified 13th. We tore out the rear and the transmission, put it back in the car, dropped the pan and went through the bottom of the motor, and my boys put it back together for first round and won. We didn’t get down the track in qualifying, then we put the guy on the trailer first round. It was a very awesome deal.”

Decker Jr. then scored a major semifinal win over Steve King, beating King’s 3.795 with a 3.683 at 210.28. That secured an all-Decker final, as Decker III ended up unopposed when Derrick Ford couldn’t make it back up for the round. Decker III lifted to a 5.005 at 98.86, giving his father lane choice for the final.

“I didn’t look to see which side of the ladder we were on until after we got past first round,” Decker said. “That’s when we figured out we were on the opposite sides of the ladder. I just don’t believe in looking past the round you’re up against in that moment. After [Decker III] had the bye and I had King, I knew if I beat King that we won.”

“He makes all the calls on the car, so to go into the final against him, that was just awesome,” Decker said of racing his son. “When I won against King, they called and asked if I wanted to run the car or break the beam. I said ‘No, tell him to try something because he’s going to need it.’ He tried something and knocked the tire off. We had no intentions of laying down. That’s how we’re going to race all year.”

Decker, who won multiple races last season on his way to his first NEOPMA season championship, now has a head start on another championship. And while bringing out a second car with a new driver could seem like a distraction, the Decker’s Salvage team is proving that it’s actually an advantage.

“Obviously, everyone who competes needs to have the attitude that they’re going to win or that they have a shot to win that race or that championship,” Decker said. “We’re no different. We’re defending the championship. We’ve got a second car in the running. We’re looking to be one and two. We want to capitalize on the two cars we got. This is starting off the season right.”

Decker, a Maryland native, was grateful for the team’s success and for everyone who played a part in it.

“As always, I want to thank the Lord for where we’re at and what we do,” Decker said. “He knew [Sunday] morning what the outcome of the day was going to be. That’s how I race every round. He’s going to help me make the best decisions I can.

“I also want to thank my wife and my dad and my guys for being behind me,” Decker said. “They don’t say no and they don’t say ‘how long is it going to take?’ or ‘how long am I gonna be gone?’ They just do it. We race maybe 14 times a year, but my guys work on these cars every week. I can’t do it without them.”

NEOPMA racers will get back to racing in just two weeks at Atco Dragway’s Pro Mod Warz, May 13-14 in Atco, New Jersey.