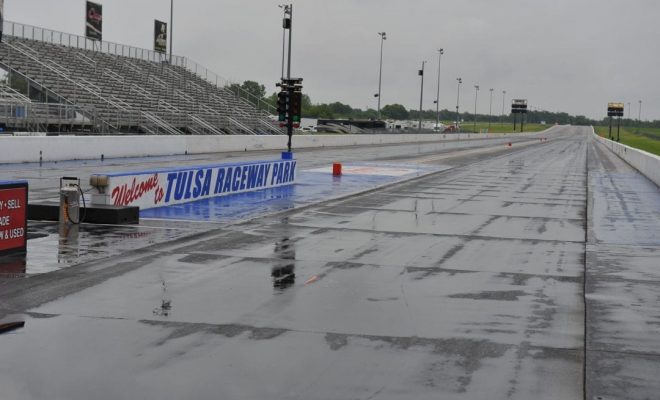 Despite a valiant effort on Thursday, racing on the opening day of the Osage Hotel Casino Throwdown in T-Town for the Summit Racing Equipment Mid-West Drag Racing Series presented by J&A Service was postponed by rain.

After a monstrous downpour mid-day, track workers and many others worked diligently to try and get Tulsa Raceway Park ready for qualifying. But one final light rain — and the ensuing darkness and dewpoint — ended chances for racing, pushing qualifying to Friday.

MWDRS officials held a driver’s meeting late Thursday as well, stating to race teams of the plan to still hold a double-race weekend on Friday and Saturday.

Qualifying for the first race is slated to begin at 10 a.m. on Friday for Pro Mod, Top Alcohol Funny Car, Top Dragster, Top Sportsman and the Jr. Dragster classes, with the second round of qualifying following at 11:30 a.m.

Eliminations are scheduled to start at 1 p.m., with the goal to run finals for the first race at 6 p.m. Friday, followed by qualifying for the second race.

The second race is scheduled to be completed Saturday, but the MWDRS did leave open the chance of possibly racing on Sunday for the first time to ensure both races at the Throwdown in T-Town can be completed this weekend in Tulsa.

“We want to give a huge shoutout to the team at Tulsa Raceway Park, all the members of the track staff, the media members and everyone who helped dry the track today. Unfortunately, Mother Nature just didn’t want to cooperate today,” MWDRS owner Keith Haney said.

“As always, what is best for the racers is at the forefront of our minds and we didn’t feel good about sending cars down the track so late in the day on Thursday. But we’re going to do everything we can to get two races in, even looking at the potential of racing on Sunday.

“We’re really appreciative of people like Todd Martin here at Tulsa Raceway Park,” concluded Haney. “It’s been over 90-days since we’ve had rain in this area and here we are dealing with rain and a rough forecast for the rest of the weekend for the Throwdown at T-Town. But we’ve got track partners like Todd who are willing to forge forward and do their absolute best for the Mid-West’s racers, sponsors and fans – even in the face of taking a loss financially. Regardless of the weather, we’re lucky in that regard, and I think I can speak for everyone at the track this weekend that we’re still looking forward to a great weekend of drag racing here in Tulsa.”

The double-race Throwdown in T-Town will feature double payouts on what’s expected to be a huge race weekend in Tulsa. Along with the standouts in the Mid-West Drag Racing Series, Scott Palmer’s Studzilla Top Fuel Pro Mod will also be in action, as well as Top Fuel motorcycles. The weekend will also include standout racing in Pro Street, 6.0 Index Class, Super Pro, Outlaw Gassers and in Footbrake.