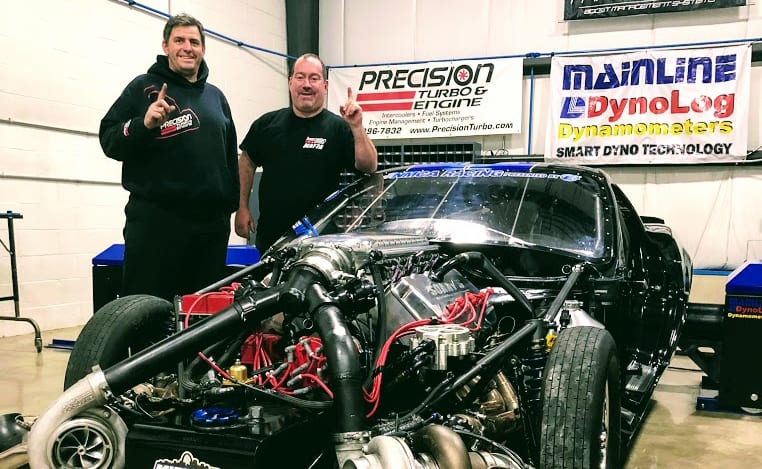 It was around 2:00 PM on a peaceful Saturday afternoon in northern Illinois with temperatures near freezing, but the action between the walls of Hyperaktive Performance Solutions was hotter than a mid-summer day. Drag radial superstar Mark Woodruff, better known as “Woody”, brought his extremely popular 2010 Chevrolet Corvette north from his Arnold, Missouri, home for two days of testing in January. 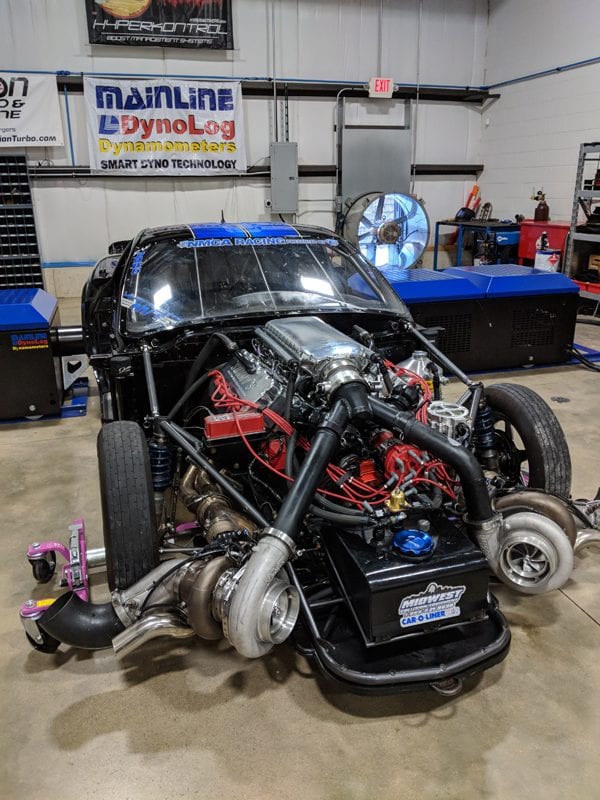 Joe Oplawski, owner of Hyperaktive, recently installed a Mainline Prohub hub dynamometer after months of research to find out what would be best suited for his customers. Tim Slavens was the first to try out the new dyno, followed by PDRA Pro Nitrous star Ron Muenks and a host of others have made the trip, but none quite as mind-blowing as the pulls that took place on January 6th, 2018. Woodruff along with the team from Precision Turbo and Engine, one of his long-time marketing partners, converged on Hyperaktive for some pre-season testing with the car and a handful of new products to test for Precision Turbo and the team.

Oplawski carefully takes previous run data from a solid run on track to be able to simulate a sub-4 second run down the eighth-mile.

“Being able to take data from the car’s previous runs and set the dyno has been a breeze. It has allowed us to closely simulate load the drivetrain sees going down the track, things like converter slippage can be duplicated and tested, but more importantly repeated,” explained Oplawski. “The first pull with Mark’s car was a 1,600-horsepower baseline pull and the driveshaft RPM lines up exactly on top of the best curve – that’s what impresses me every single time.”

After a number of pulls with a host of different combinations to meet specific rule sets, it was time to go into Radial vs. the World trim with the large wheel turbochargers and see what the HEMI-headed powerplant could produce. On the first RVW-setup pull, the black-and-blue ‘Vette sent 3,800-horsepower to the axles. After reviewing the data, Woodruff, Oplawski and Roger Conley from Precision Turbo, all decided to make a few small tune-ups changes and give it one more go before calling it done. Tune-up loaded, ear protection set and fire in the pipes, Woody was going to give it one more go.

As the turbos began to build boost and the RPMs began to climb, the 522ci Sonny’s Racing Engine built by Kris Nelson toward 9,000RPM, producing a whopping 4,343-horsepower.

“The amount of air moving and pressure in the room to make over 4,000-horsepower was simply insane,” admits Oplawski. “From the start of the pull, the car was just flat out meaner, I think we were all shocked when the numbers popped up.”

Conley, Vice President of Global Operations at Precision Turbo & Engine, was on hand as well to test new products and witness the feat provided by Woodruff and team.

“The session at HPS was a great experience and hands down the smoothest research and development process that I’ve been a part of over my years in motorsports,” admits Conley. “Woody, Brent and the entire team are some of the best people to work with along with one of the best cars in the game. We made 12 pulls, had zero issues and all of the data is consistent and reliable, we’re proud to be a part of the Mark Woodruff Racing team and provide them with the boost needed to launch over 4,000 horsepower down the drag strip.” 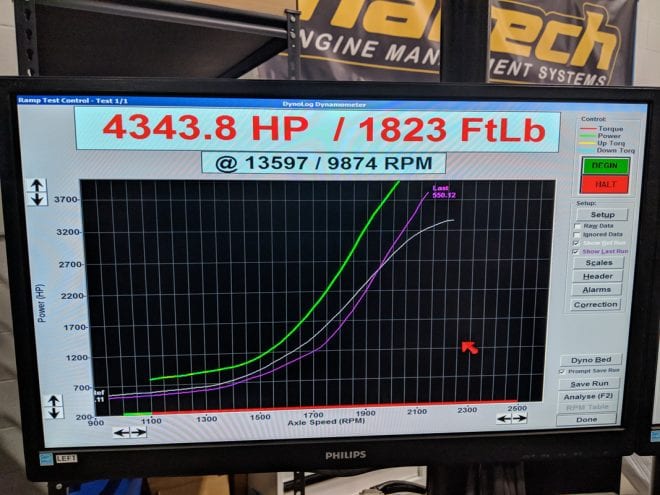 Exclusive footage from inside the dyno room, provided by Brent Sansoucie and the Hyperaktive team, illustrates the ferocity of over 4,000-horsepower being unleashed in a closed room. For years, people have speculated what a top-tier RVW car is putting to the ground via horsepower numbers, and now we know what the fastest radial-tire car on the planet (212mph) produces at the tire.

Woodruff was complimentary of the team and everyone involved, but admitted he was focused on translating the big power numbers into record-setting, race-winning performance on the track – namely at Donald Long’s Lights Out 9 next month.

“We’re headed to Valdosta next month with more power than ever,” said Woodruff. “We know that for a fact, and I think it’s going to be a whole lot of fun.”