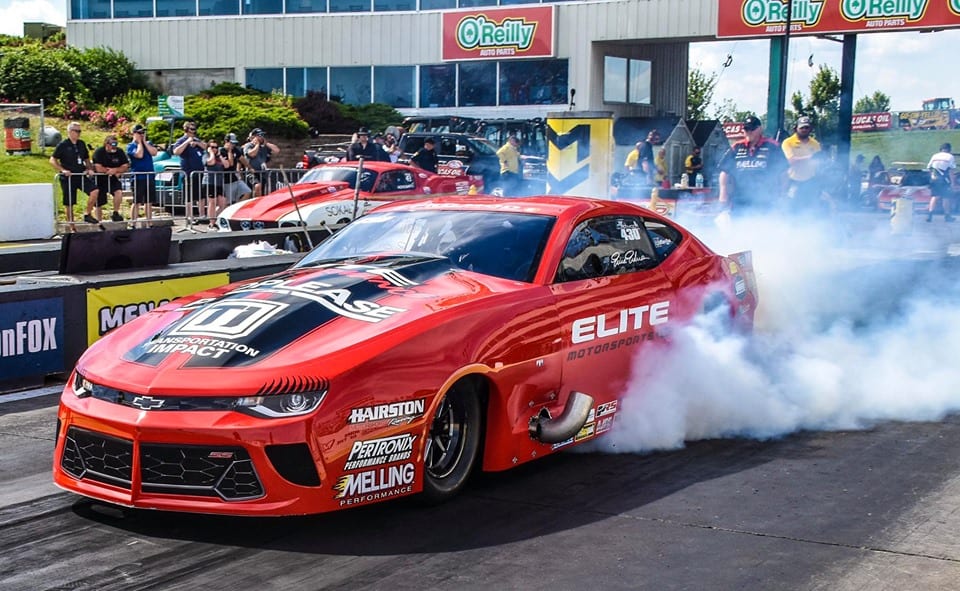 BRISTOL, Tenn. – Erica Enders’ father, Gregg, won’t be at Bristol Dragway for this weekend NHRA Thunder Valley Nationals, but like usual, Enders will be in constant communication with her father.

Her pre-race routine includes talking to her dad before every run, something she’ll do this weekend before driving her turbocharged Elite Motorsports Camaro in Pro Mod. It’s ritual at this point, but as she races on Father’s Day Weekend, it’s also a reminder of how much he has meant to Enders’ career.

“I wouldn’t be where I’m at without my dad,” said Enders, a two-time Pro Stock world champion. “Had my dad not been my hero, I wouldn’t have wanted to fall in his footsteps. It’s been really nice to have my family with me every step of the way. I don’t think we would be as close as we are without drag racing.
“I talk to my dad before every single run in the car, whether it’s just some last-minute coaching tips, visualizing what I want to do or just having a positive mental attitude. He’s 100 percent the reason why I do this, so we’ll do our best to give him a trophy.”

Enders has given her father a pair of Pro Stock wins on Father’s Day (2015, 2014), and this weekend would be as good as any to pick up her first career victory in Pro Mod.

The Elite Motorsports team has made significant steps in recent weeks, picking up a round win and adding another 260 mph run a week ago in Topeka, and a victory for a team that includes Alex Laughlin and Steve Matusek would be the icing on the cake when it comes to their progress.

One added bonus is turbo cars usually run well in Thunder Valley, which is good news for Enders, who considers Bristol Dragway her favorite facility on the NHRA tour.

“It’s absolutely my favorite spot,” Enders said. “It’s a really cool track, great people and it’s a cool place to go. It’s a really pretty part of the country and with the way the track is set up, you’re on the starting line and you look up and see the mountains, it’s pretty awesome. I just love going there. It’s been one of those tracks that’s been good to me, so I’m excited to take the Pro Mod car there and see what we can do.”

Enders is eighth in points through seven of 12 races during the 2019 NHRA Pro Mod season, but this is an important stretch for the team. Bristol lands in the middle of three straight Pro Mod weekends and then the class gets a two-month break before returning in Indy. With that much time off, Enders wants to make sure she heads into the extended time off in Pro Mod on a good note.

“We want to get my car to a point where it’s happy,” Enders said. “I feel like the program is heading in the right direction, but you definitely want to head into the break on the right foot. We tested in Bristol after the race last year, so hopefully that data will help us this weekend.”

The first of four E3 Spark Plugs NHRA Pro Mod Drag Racing Series presented by J&A Service qualifying sessions takes place at 3:45 and 6:45 p.m. on Friday, and the final two rounds of qualifying take place on Saturday at 12:15 and 3:15 p.m. The first round of Pro Mod eliminations are scheduled for 1:00 p.m. on Sunday.