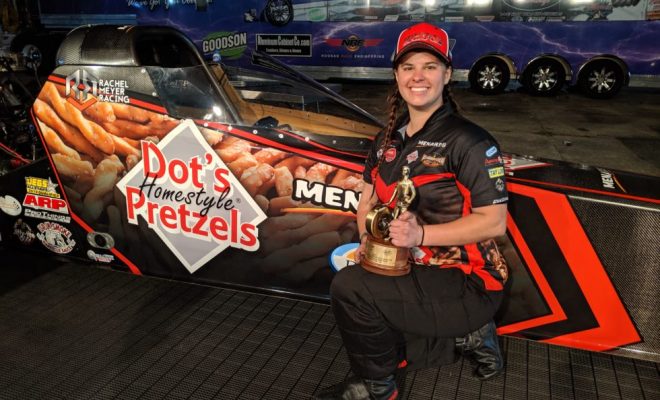 For the second year in a row, Rachel Meyer dominated the Top Alcohol Dragster class at No Problem Raceway in Belle Rose, Louisiana this past weekend. Rachel defeated number one qualifier, Jackie Fricke, in the final round.

This year’s Nitro on the Bayou was the first outing for the Randy Meyer Racing Team of the 2020 season with driver’s Megan Meyer and Rachel Meyer. Rachel, in the Dot’s Homestyle Pretzels/Menards A/Fuel Dragster, qualified sixth and ran consistently in the 5.30s range all during eliminations. Megan, in the NGK Spark Plugs A/Fuel Dragster, struggled to get down the track and unfortunately never made a full-pull all weekend. She qualified seventh and lost first round to Dean Dubbin.

However, Dubbin had motor issues during the opening round of eliminations, and was unable to make an appearance for second round. This allowed Rachel a bye run in the semi-finals, where she ran a 5.35 ET at 269 mph after running a 5.37 ET to defeat Robin Samsel first round. Rachel did lose lane choice to Fricke, but she made it up on the starting line getting a .05-second advantage over Fricke. Rachel’s winning time was 5.34 ET at 268 mph to Fricke’s 5.36 ET at 269 mph.

“It feels good to start the year off with a win,” said Rachel. “Hopefully we can keep it up for the rest of the year. Seeing as we didn’t do very well in qualifying, I was a little nervous going into first round, but, I really wanted to win this race again and defend my title. My next race will be the Dallas regional race at the end of the month, it would be cool to get another win and keep the points lead.”

Megan and Rachel will battle it out again on the track March 27-28th at Texas Motorplex. Megan took down Rachel in the final round at this race in 2019, will the Meyer Sisters have another chance to take first and second? Tune into Randy Meyer Racing on Facebook and Instagram to find out.