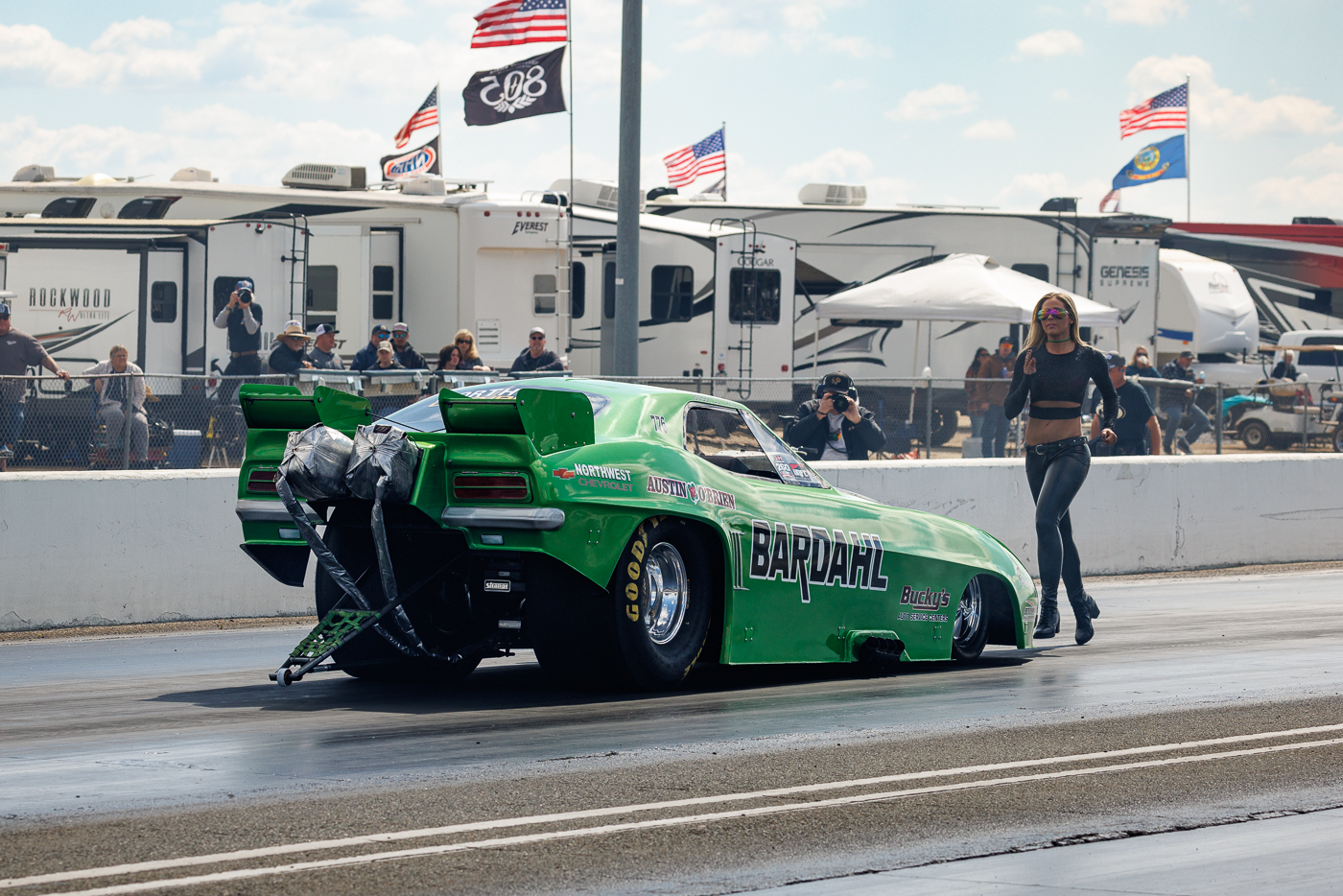 The 64th annual Bakersfield March Meet at the historic Famoso Dragstrip turned out to be a race against the weather with Nostalgia Drag Racing being the winner at the end. On Friday the cold and wet weather gave track officials and racers only a three-hour window to get qualifying rounds in. Saturday had more rain coming in from noon on, which allowed only one more qualifying round. The planned second session got delayed due to showers and an oildown well into the night, so the track was already too cold to provide enough traction for the nitro cars. 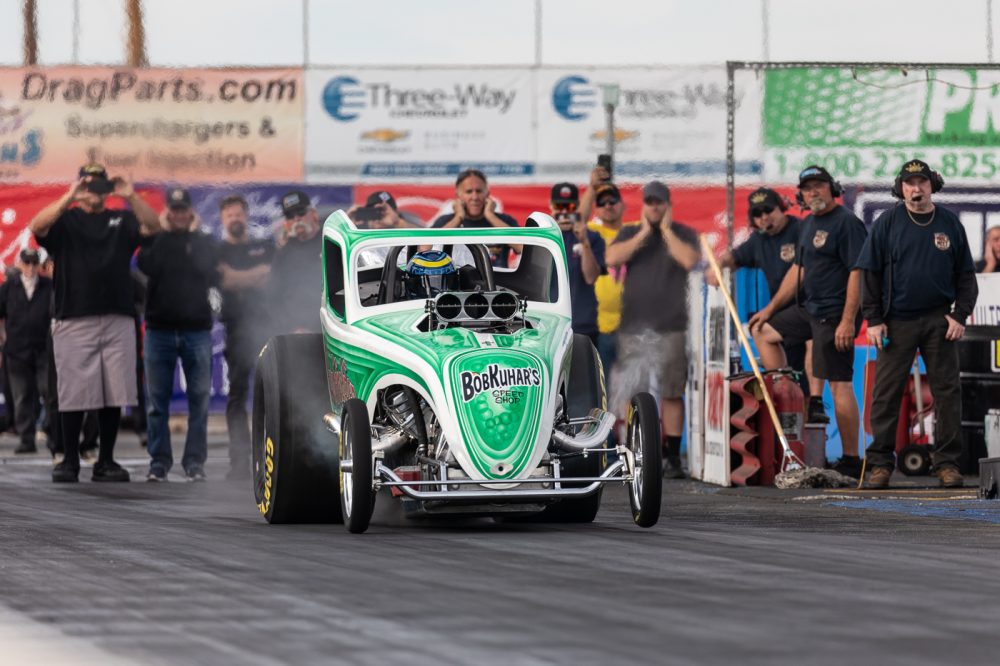 After fulfilling his dream of winning a March Meet AA/FA trophy, which he did in the Hertzig Motorsports “Good News” AA/Fuel Altered back in 2020, reigning NHRA Funny Car champ Ron Capps was back for more. This time he took the wheel of the newly built Burkholder Bros. Fuel Altered Fiat Topolino. But on the two attempts Capps had problems keeping the the Burkholder Brothers Altered in the grove and his best e.t. of 7.70 seconds at a coasting 116.32 mph unfortunately wasn’t quick enough to make the eight-car Fuel Altered field on Sunday. 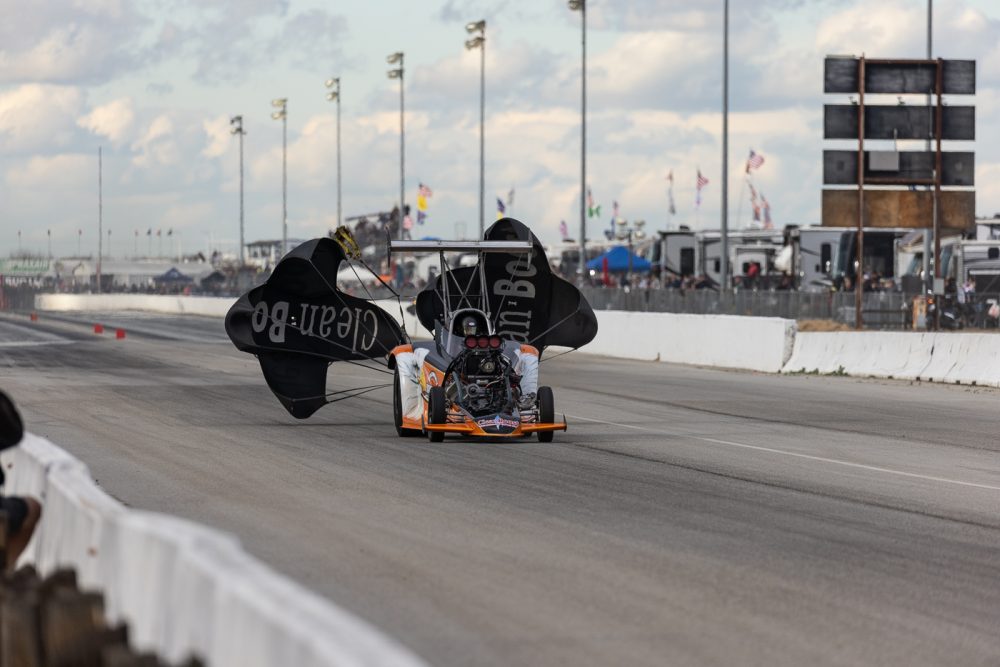 Once more it was Bobby Cottrell who dominated the Nostalgia Funny Car class on race day. On his way to the finals he defeated John Weaver in the first round and Dan Horan in the second round, as well as Dan Horan in the semifinals with consecutive quick runs in the 5.60-second zone. On the other side of the ladder, Geoff Monise took out Tim Boychuck in the first round and got a lucky second round win over Rian Konno, who was a no-show. Having hurt his engine in the first round, Monise needed a loan of an engine from Densham Motorsports to compete in the semifinals. Monise went on to defeat Cory Lee in the semis, but only to hurt this block again, which prevented him from making the call for the finals, handing the win to Cottrell. Certainly not how Cottrell wanted to win a final round, but this time he got it by just rolling to the starting line. 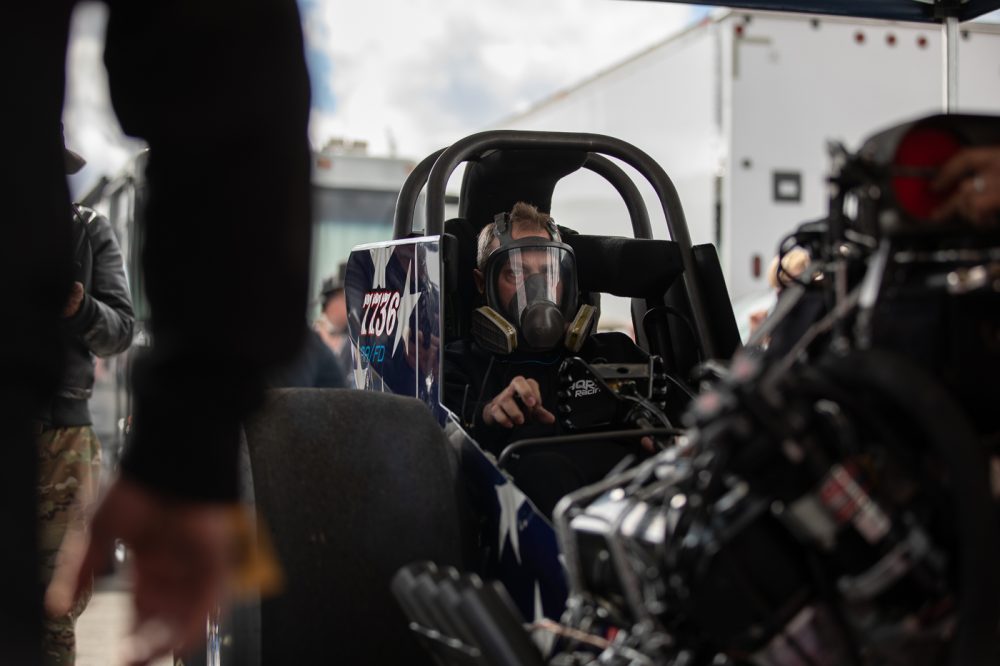 Bret Williamson won his first round against a tire-smoking Brendan Murry and went on to beat Tyler Hilton in the semifinals before the finals, where he met Jim Murphy. Murphy himself took the win over Bryan Hall and Tyler Hester on his route to the finals and looked like the favorite having run better numbers and posted better reaction times than Williamson all day long, but Williamson was able to defeat him in a close final with a 5.731 at 256.06 mph to Murphy’s 5.771 at 256.75 mph. Williamson’s win gave him a head start in the championship points battle for the 2022 Nostalgia Top Fuel championship crown. 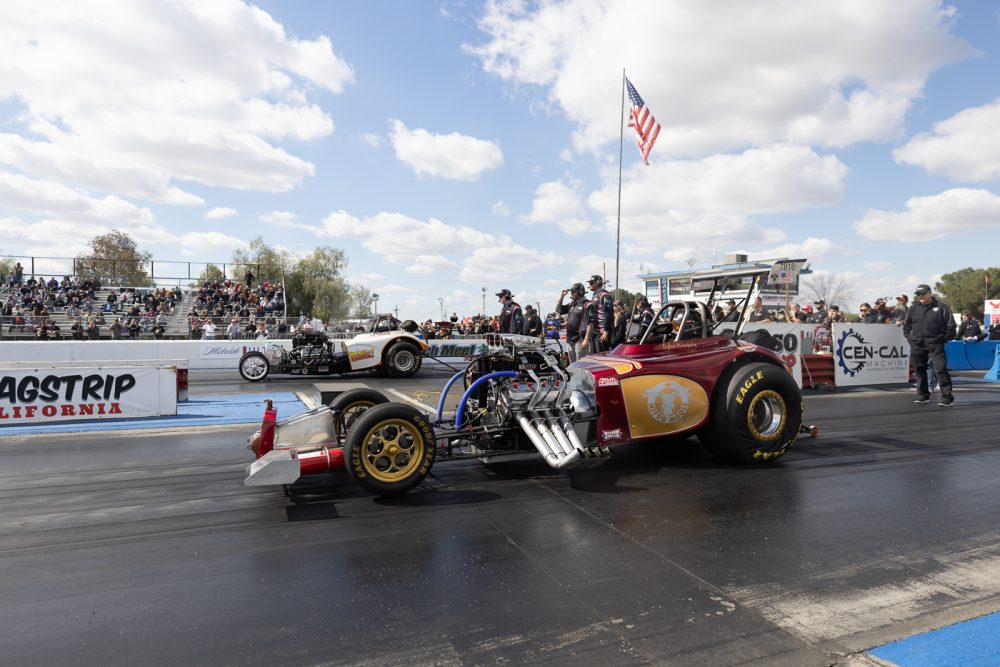 Dan Hix, no stranger to the winner’s circle at Famoso Dragstrip, made it to finals in the Fuel Altered class against Mark Whynaught in the “Nitro Mamba” Fuel Altered. Hix beat Whynaught on the tree but ran into tire smoke shortly after the hit. Whynaught passed him but suddenly slowed after his ride lost power and coasted towards the finish line. Hix got back on the throttle and flew by him to cross the line first with a 7.010 at 208.78 mph to a 8.877 at only 96.46 mph.

March Meet debutant Lyle Greenberg brought his beautiful “Cone Hunter” Corvette Funny Car all the way from New Mexico to compete in the Nitro Pro Comp series. It turned out to be a huge success as Greenberg ran well in eliminations and ended up in the finals against Keith Wilson in the “Witch Doctor” Altered. Wilson’s 5.863 et ended up being a smidge too quick for the Nitro Pro Comp 5.90 index, handing the win to a very excited Greenberg, who celebrated on the wing of his Funny Car during winner’s circle.

Winners in other categories were: 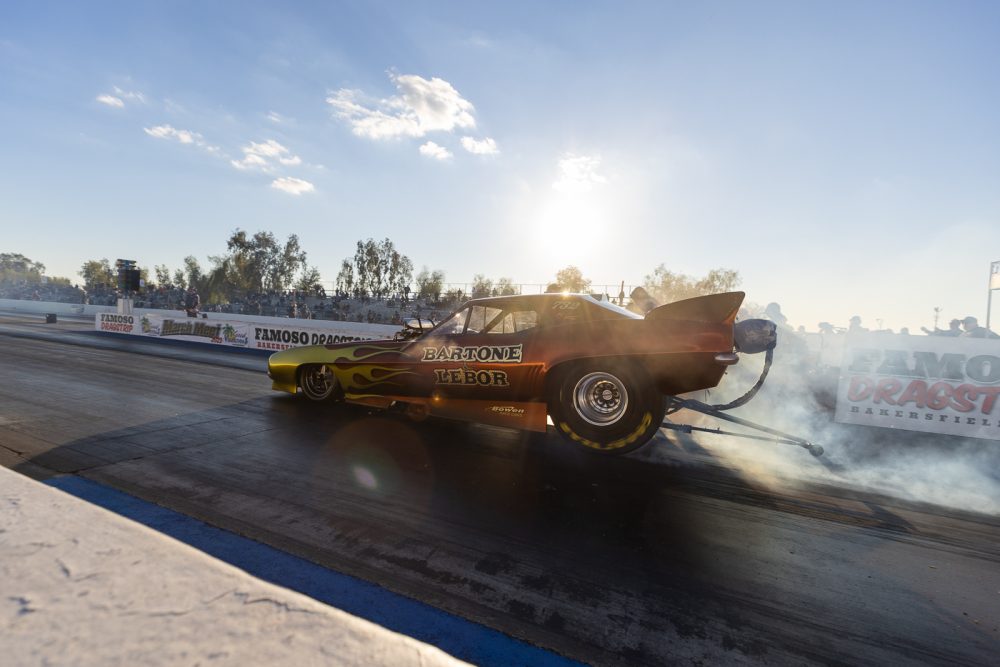 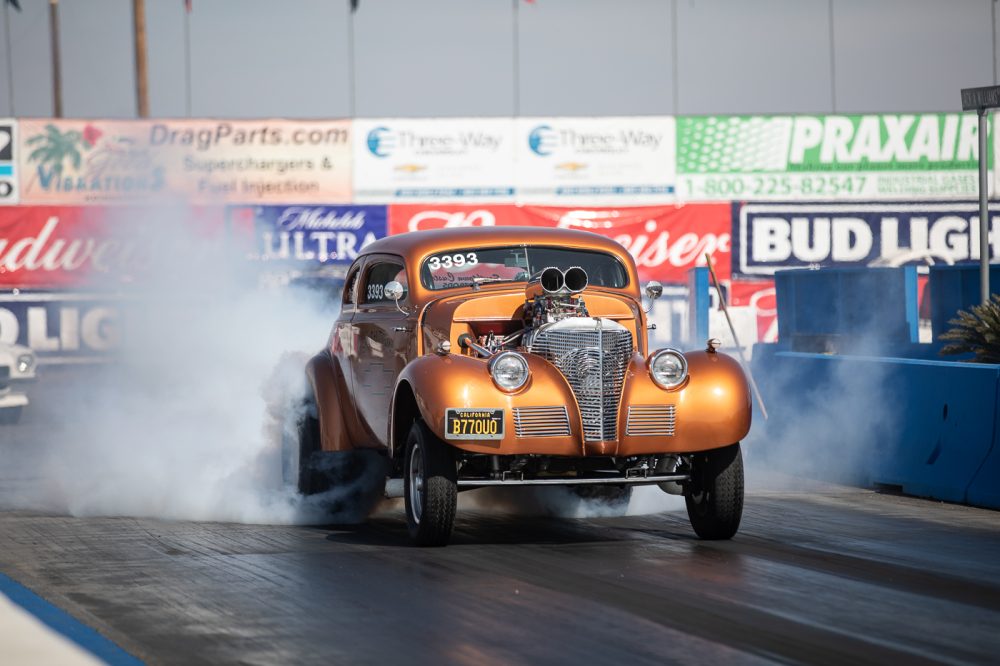 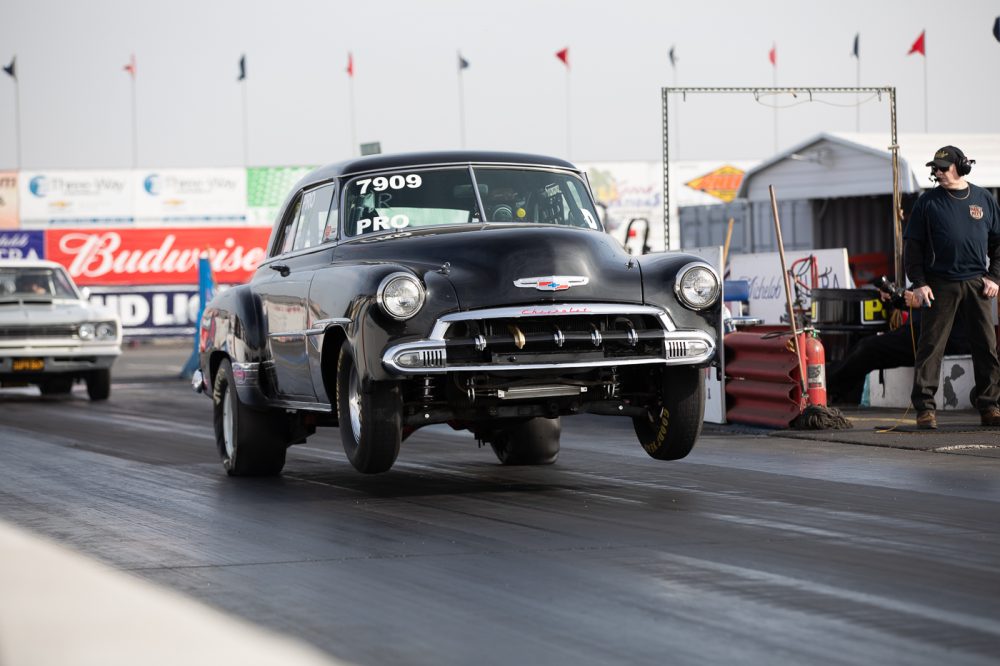 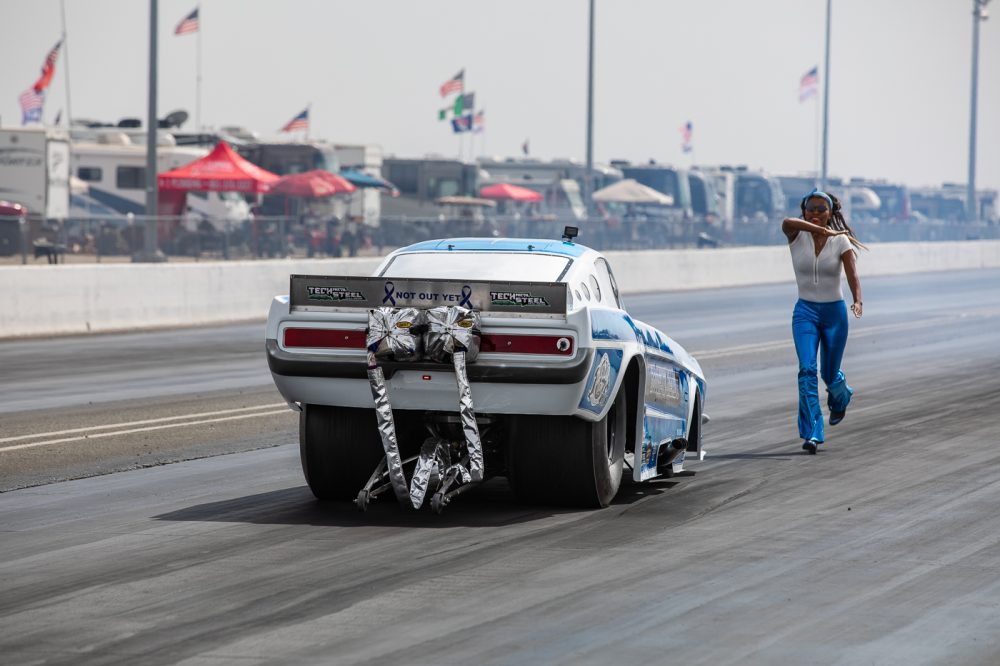 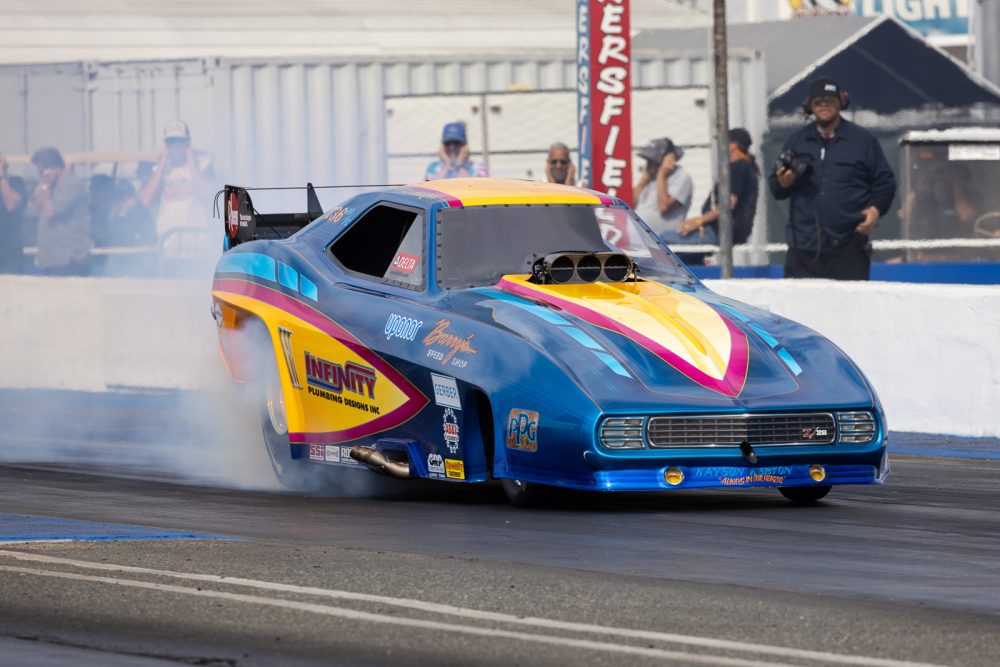 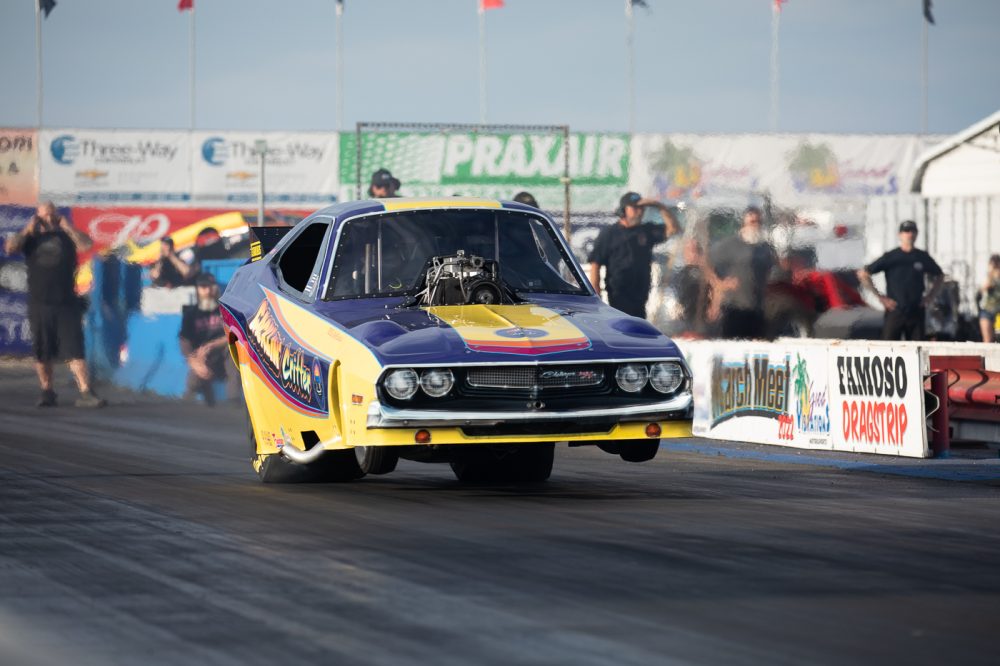 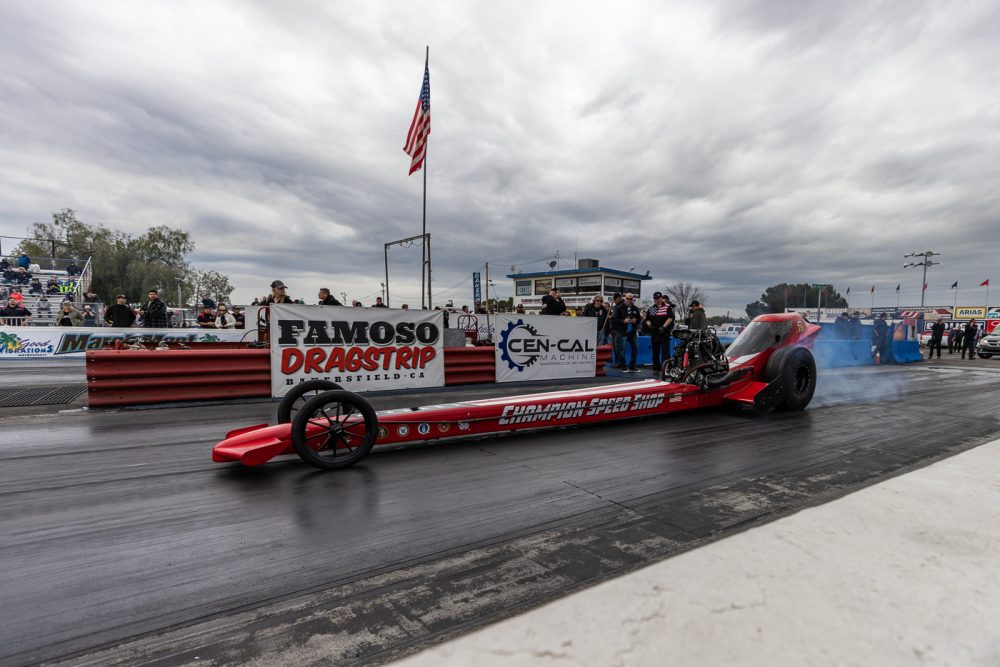 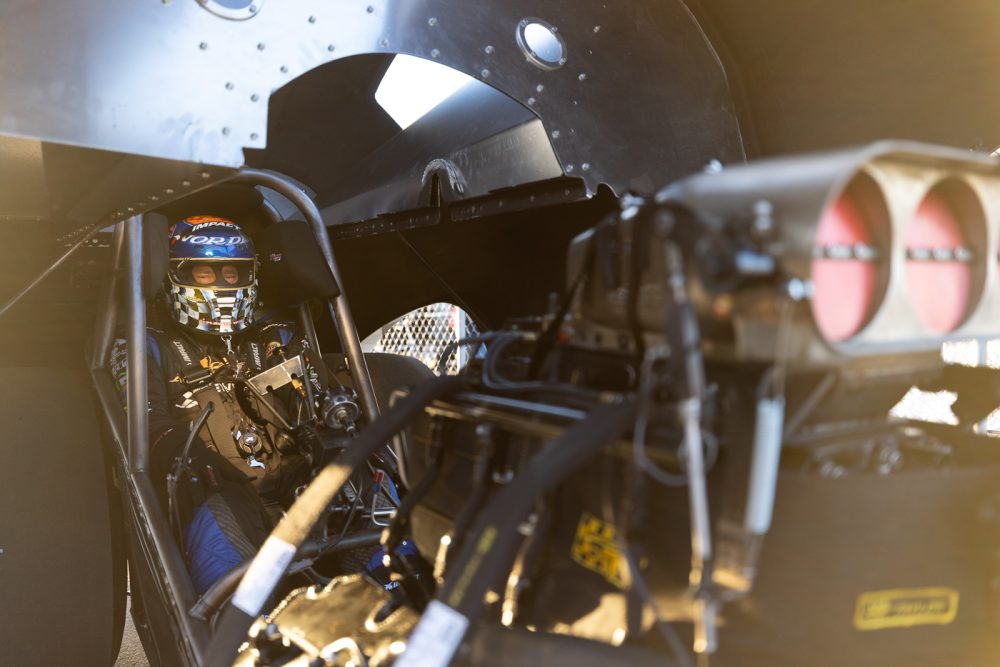 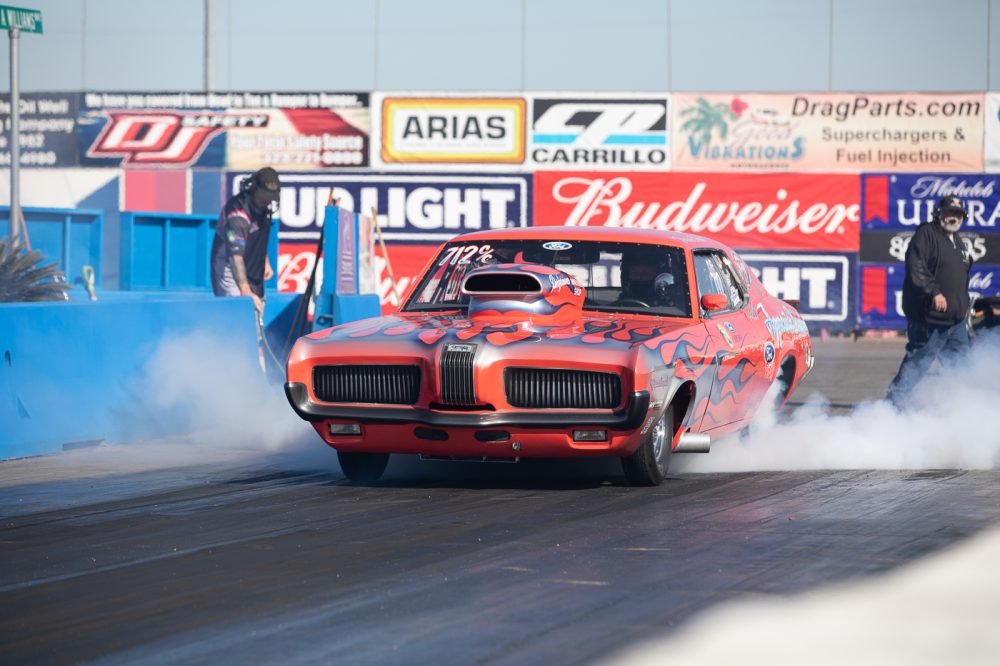 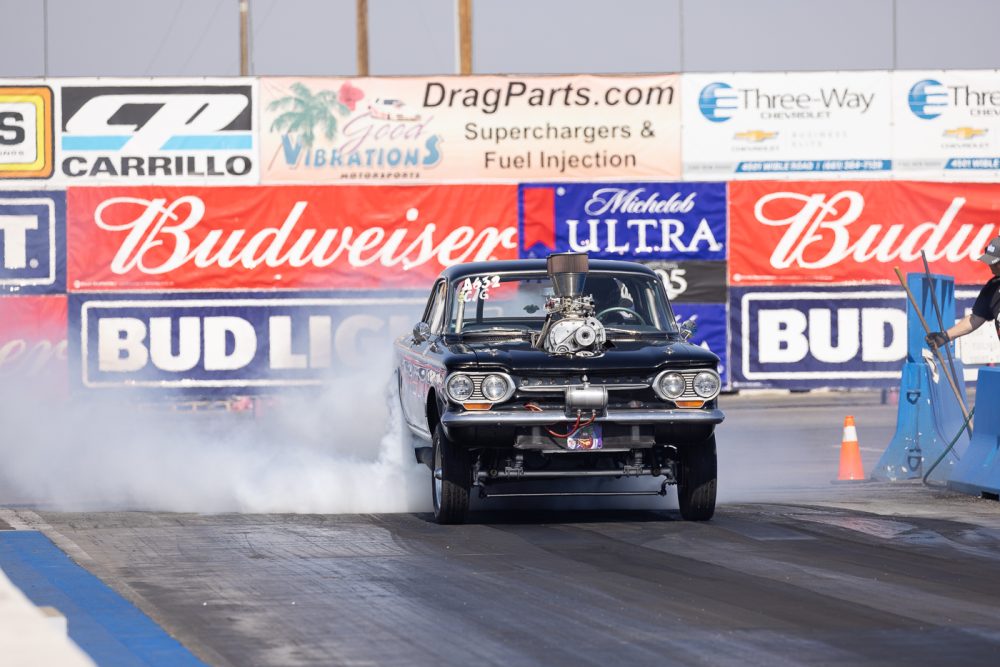 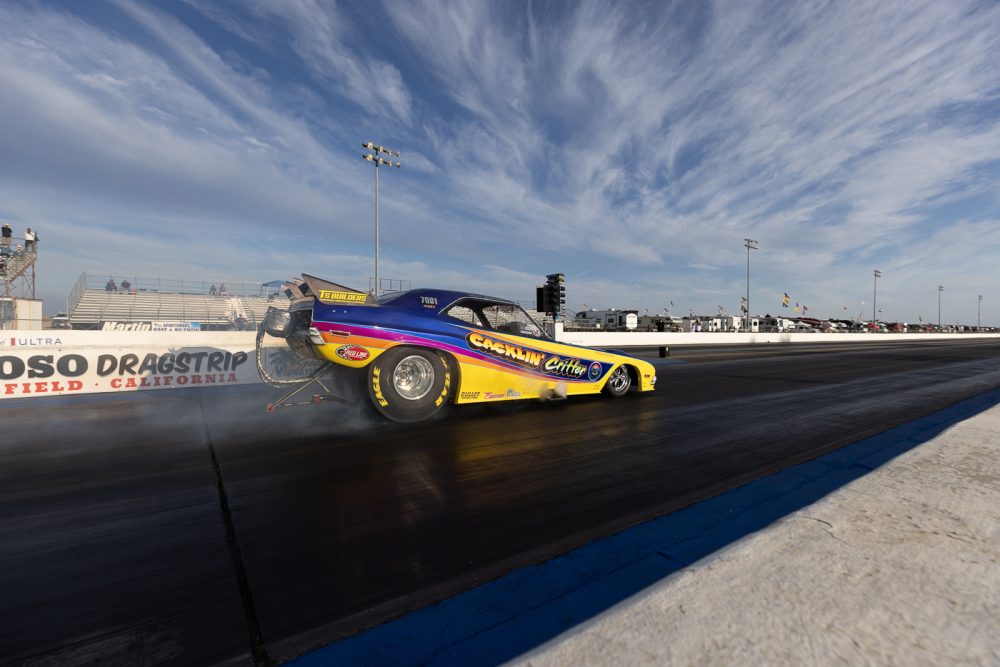 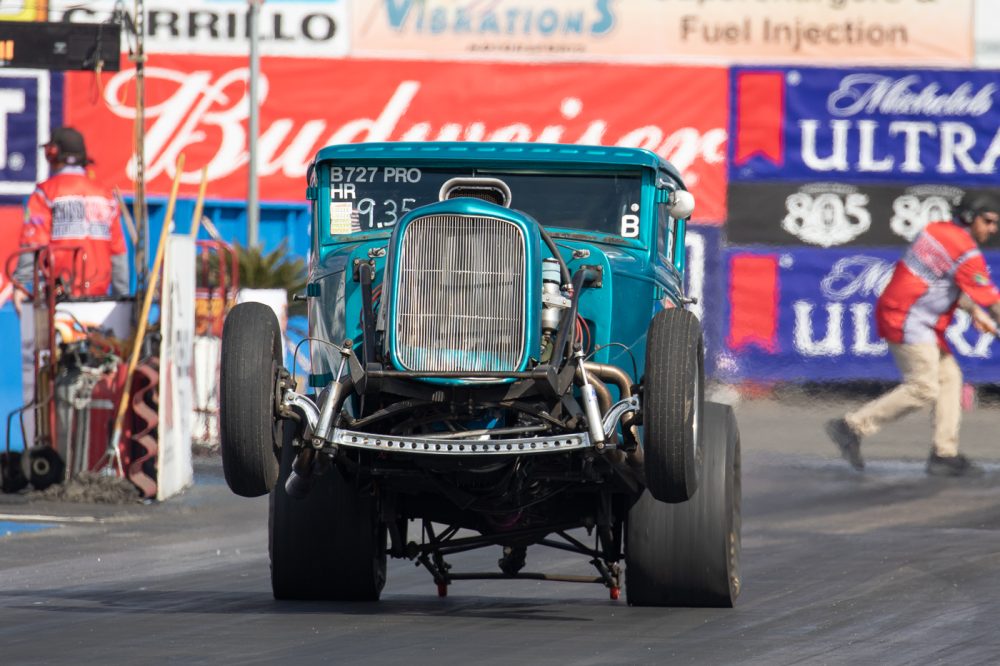 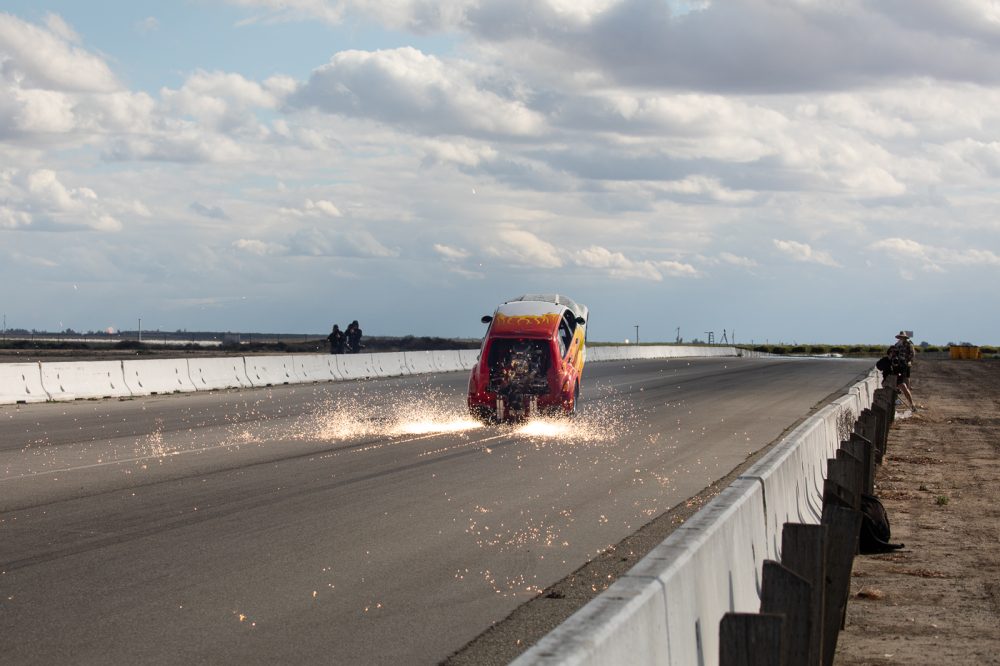