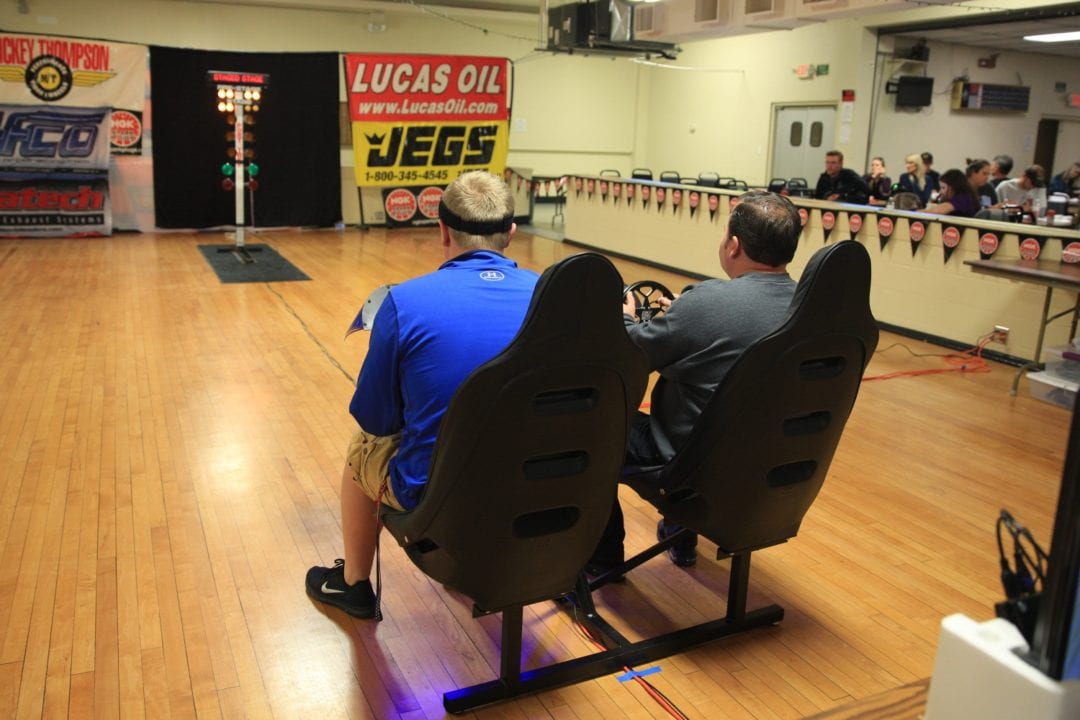 With an unbeatable combination of fun, excitement and competition, the 4th Annual DragstersForSale.com Practice Tree event, January 20, in Evansville, Indiana, was another big hit. The day was packed with events, prizes, and surprises for everyone who came to chase race entries and cold hard cash.

The night started off with a Warm Up race to get the blood flowing, wrists snapping and fingers twitching. The Warm Up offered weekend entries to the premier bracket races in the nation, including Triples at the Million Dollar Race, Triples in Vegas, No Box Nationals, and the Summer Door Car Shootout. The Main Event featured big cash payouts, with 32 entered racers fighting for an entry into the Million Dollar event in Montgomery, Alabama. The evening wrapped up with the Racepak Shootout, which included all the winners, runners-up and semifinalists from the evening battling for a Sportsman Racepak and Pit Mat.

“It’s all about getting the right mix of events, sponsor support and the weather lining up for the event to have the success we have had,” said Don O’Neal, event organizer. “On Thursday we had sponsor prizes snowed in down south, up north and anywhere in between. Our event t-shirts were stranded on Friday in North Carolina. Steve Knight overnighted them to the VFW, where they were delivered at 3 p.m. I jokingly told everyone that they all received the most expensive event t-shirt they will ever get.” 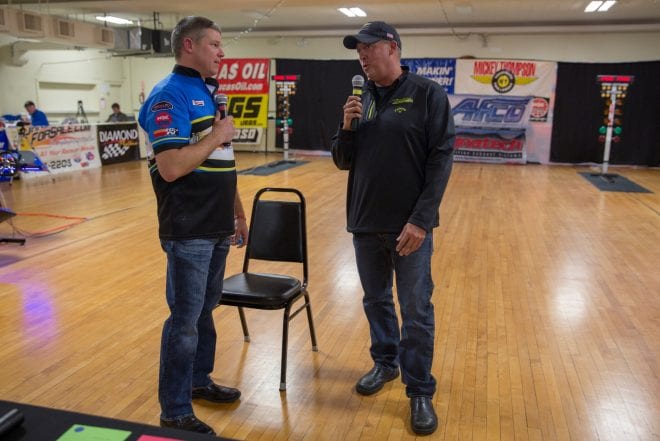 Attendees received a surprise when 2017 NHRA Pro Stock world champion Bo Butner and his fiancé, Randi Lynn Shipp, made an appearance to mix it up with racers from all over the region. A longtime sportsman racer often referred to as “The Sportsman’s Champ”, Butner was welcomed with a huge round of applause inside the VFW Post. “I bet you I have hit the top bulb 50 times in my life,” Butner chuckled. “Tonight was a blast, to see everyone come together to talk racing and practice.”

The Warm Up saw 241 entries stage up for a chance at weekend race entries in the 2018 season. Butner started off a little rough in the beginning, but it didn’t take long for him to settle in and string together low .00 reaction times to land himself in the final of the Warm Up against Carson Griffith, who had two entries still in. Griffith took out the champ with a .001 to Butner’s .009. Griffith chose the Triple entry at Montgomery, Butner selected the Triple in Vegas, then Griffith chose the No Box Nationals. Semifinalist Tyler Bohannon picked the Summer Door Car Shootout.

The Main Event combined the competitive top bulb racers with a slice of the best bottom bulb racers in the country. The event started with 568 entries chasing an advertised winner’s purse of $4,000. With the number of entries going over 500, it was announced that the purse would be increased at every payout position. The structure allowed the racers hitting the bottom to match up against each other until only one was left to collect the $250 Last One Standing cash. This was a first for the event, keeping top and bottom separated, which seemed to help the event for entries and time. 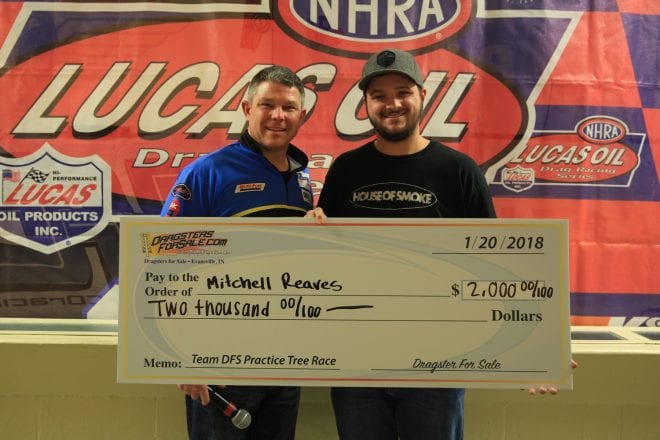 “We have always tried to make sure that we have something for everyone at the event, whether it’s prizes for the significant other, bottom bulb events, top bulb, and so on,” O’Neal explained. “I want to make sure there is something for everyone. This year it seemed that announcing the bottom bulb racers being separate for many rounds helped with the number of actual bottom bulb racers who attended. This will more than likely signal a change in the way we approach the event.”

The Main Event saw a world champion, NHRA division hitters, bracket racing experts and even a couple Jr. Dragster racers battle it out for five long hours of focus and letting go of the button. The night progressed until two tough bottom bulb racers, Josh Lynch and Seth Lancaster, were left. They staged up, patiently waited for each LED light to fall, then the tree flashed on the side of Lancaster, as he grabbed the first round of cash payouts of the night. Lynch and Lancaster both rolled on over to the next round of the Main Event, where they would face racers who were hitting the top bulb all night.

When the semifinalists gathered to discuss a split, all four racers were eager to push money further back to the semifinalists. This round was paying $750 to the losers. Cody Williams and Carson Griffith just missed the tree in their pairings, placing Zack Manuel and Mitchell Reaves in the final, running for $5,500 between the winner and runner-up. This payday turned out to be a good one for both racers, as they also split up the money for a $3,500/$2,000 split. Manuel nicked Reaves for the win. 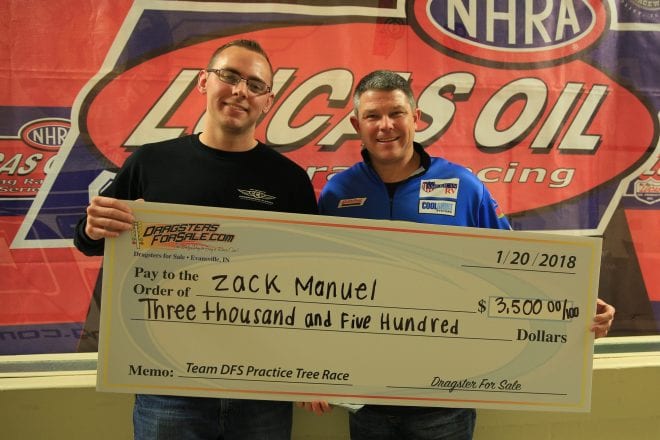 The Million Dollar Race Shootouts, supported by Randy and Jennifer Folk from day one, included hitters from all over the country, all of whom were trying to have their October race entry covered in January. As in the past, competition to claim the entry to the Million was no small feat. The first Million saw “Two-Seater” Doug Foley Jr. in from North Carolina secure the victory over local competitor Josh Harper. The second Million Shootout saw two familiar faces square off in the finals as Midwest .90 racers Joey Fuesting and Devin Isenhower were left standing. Isenhowser claimed the victory over Fuesting, but both of them secured their spots in the final event, the Racepak Shootout. 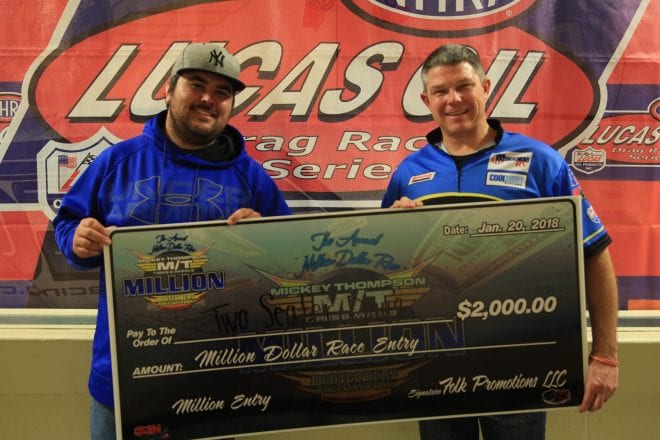 The Racepak Shootout included all of the “so-close” racers to send them home with a RacePak logger or Pit Mat from Racepak. Closing the deal was Joey Fuesting in a squeaker against Mitchell Reaves to take home a Sportsman Logger from the great folks at Racepak.

After 16 straight hours, 60 pizzas, 30 cases of beverages and thousands of releases on the transbrake button, the bright LED lights from Porta Tree went out, waiting for the cold winter months of January 2019 to see who will emerge with cash and entries to the greatest bracket racing events in the country.